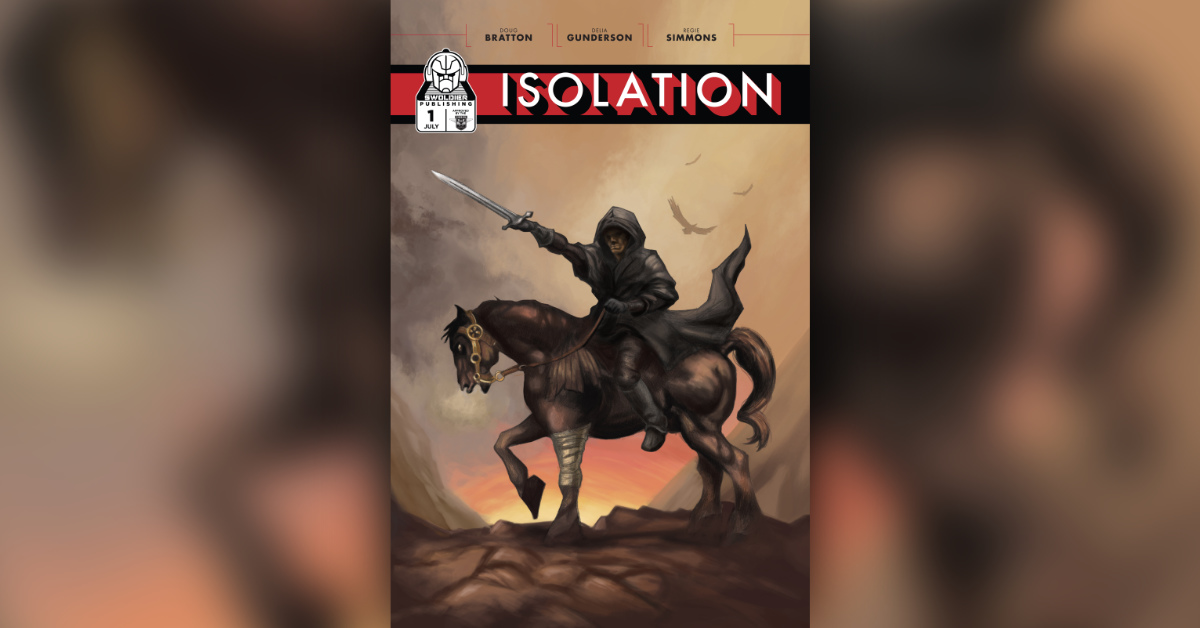 Writer Doug Bratton’s comic book Isolation is an ambitious murder mystery that spans decades. According to the press release, Isolation is “set in multiple time periods that looks at distinct eras of murder in a secretive community.”

For Doug Bratton, Isolation is a shared personal achievement. His YouTube friend Regie Collects releases the comic this month through his own Swoldier Publishing. Without a doubt, it’s a labor of love. Collects (Regie Simmons) and Doug Bratton are two longtime comics collectors living a dream. Doug Bratton recently took time to answer questions about Isolation.

Geekosity: How would you describe Isolation?

Doug Bratton: Without regurgitating the summary, I’d say it is a non-linear story about three specific years in a community of many secrets. Each of those years yielded an unusually high number of murders/killings. The overall series is a mystery with twists, turns, red herrings, and surprises, but it isn’t a traditional “whodunnit” for the most part. It has elements of fantasy, horror, and U.S. history sprinkled in as important elements of what happened in and to the community, and more importantly, why it happened.

Geekosity: How many issues are you planning?

Bratton: If we are fortunate enough to build an audience and sustain the series, the plan is between 32-36 issues. I say “plan” because some of the chapters I have plotted are longer than others, and ultimately there is a chance that a chapter here or there needs to be split up into two comic book issues. There are three “books” planned that make up the series, and each book has between 10-12 chapters.

Geekosity: Isolation is published by Regie Collects’ Swoldier Publishing. How did you meet him and how did it evolve into a comic-book series?

Bratton: Well, that is quite a long story! The short version – I met Regie as a fan of his YouTube channel. I got back into comic collecting during the pandemic lockdown out of boredom and learned a lot from “Regie Collects.” We built a friendship and business relationship when I started writing blogs for his website. I have been a writer and cartoonist (newspaper and magazines) for over twenty years, and while I wrote a draft of the first “book” of Isolation in novel form, I had envisioned it as a comic or graphic novel series.

After Regie and I wrote a successful book together (The Guide to SMART Comic Collecting), Regie established Swoldier Publishing, and I pitched Isolation. Regie has many gifts, but his greatest, in my opinion, is a clear vision for what can be – and fortunately, he saw the potential in Isolation as a comic series and intellectual property beyond. 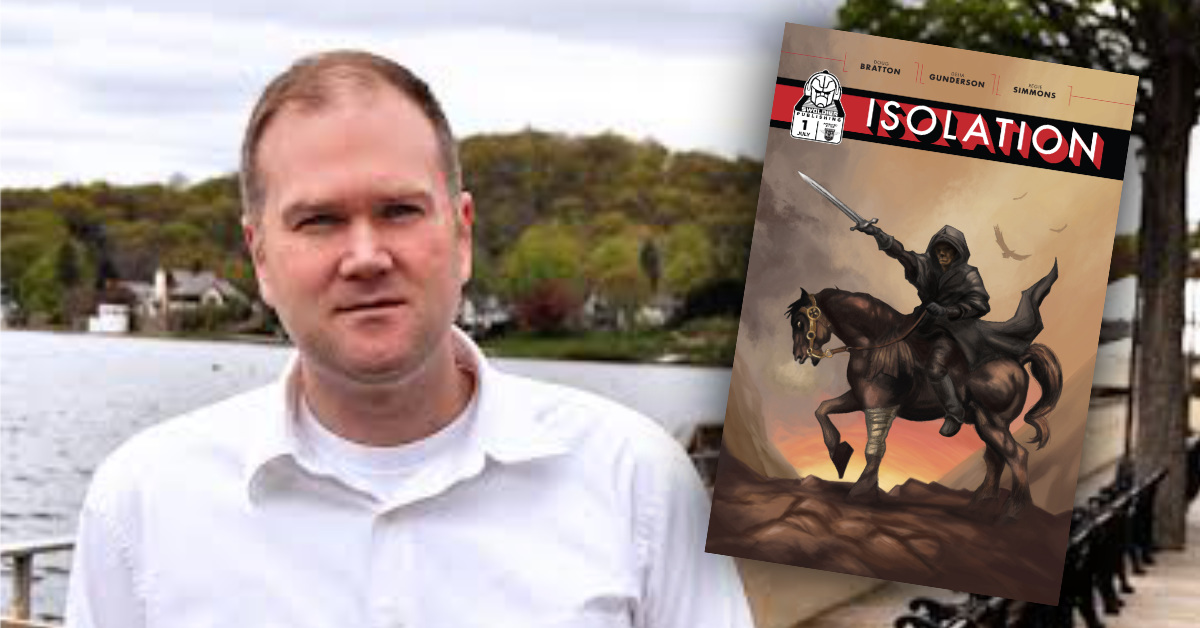 Geekosity: When I first heard the title, I thought of the Joy Division song. Was that an influence?

Bratton: I wish I could say yes, because I love music from that era and greatly appreciate Joy Division. So. . .well, I’ll just lie and say yes because that’s more fun.

Geekosity: Did you write Isolation full script or the Marvel way? I ask because I wrote my own Dream Walker No. 2 full script, and my artist and I were totally drained.

Bratton: Full script. In fact, Isolation went from years of notes to detailed scene by scene outline to draft novel to full script. Very time consuming and not a plan I’d necessarily recommend to any aspiring writer, but it just happened to work out that way. I actually quite enjoy writing in script format, but I have to have a framework to better understand what each page and scene needs to include before writing the formatted script. As you know as a comic-book writer, it is a process to create a thoughtful page – a good comic page isn’t just “well, I ran out of room, on to the next one.” It has specific reasons for where it begins and where it ends, with the hope that your writing and the art compel the reader to turn one page to read the next.

I will say that even though I provide a panel-by-panel, page-by-page script, Delia Gunderson, Isolation’s absolutely brilliant artist, works very collaboratively with me, and we have numerous discussions about times when we can condense panels in order to tell a visually more compelling story.

Geekosity: Have you written comic books before?

Bratton: That’s complicated. I have written numerous “books of comics” in the past – collections of my newspaper comic panels. One of those, a hybrid humor book/”best of” titled The Deranged Stalker’s Journal of Pop Culture Shock Therapy, was published by Andrews McMeel. I also wrote several comic book scripts for a Batman/Joker mini-series or graphic novel that I have not yet had the opportunity to pitch to DC Comics. Maybe someday! I think it’s quite good, and definitely different from traditional Batman stories – like Isolation, it is a non-linear mystery.

With all of that stated, Isolation will be my first published “comic book” in traditional comic book form. 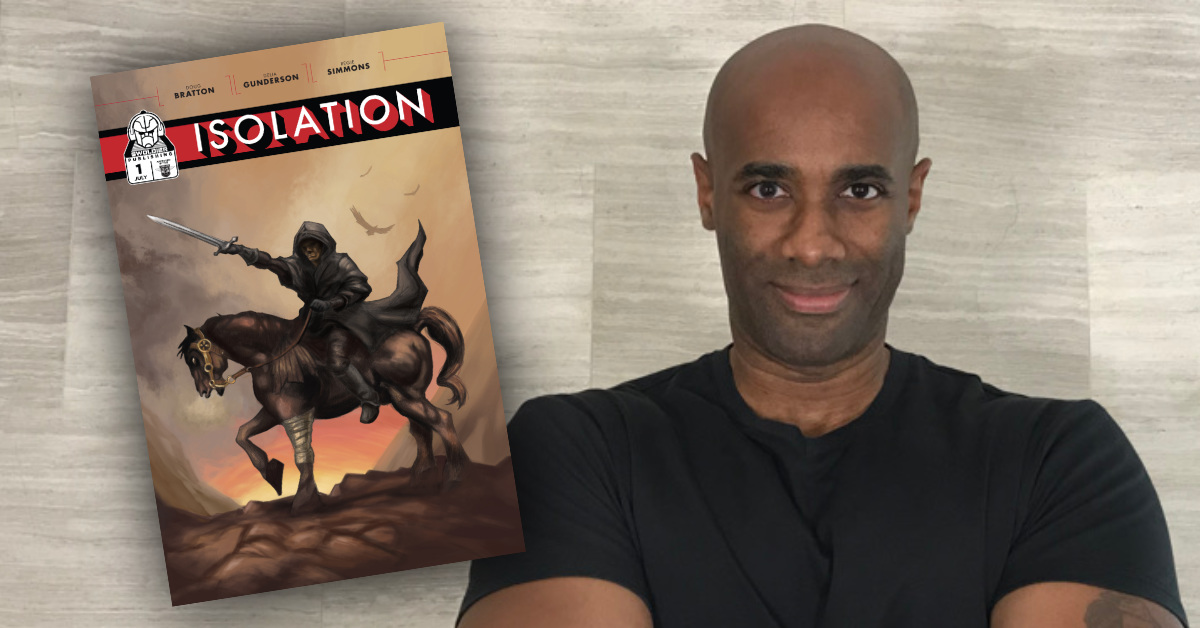 Geekosity: Who are your literary inspirations?

Bratton: That’s a tough one. I am an avid reader and have eclectic tastes. While I love comics, I read far more traditional books of all genres. I read more non-fiction than fiction because I love to learn about how and why certain things work the way they do. That includes biographies of inventors/thinkers/artists, science and science-ish books, true crime, baseball books (history and sabermetrics), and U.S. history.

While I do read mystery and other fiction, I would say my writing on Isolation is influenced far more by non-fiction books, such as Bill James’ The Man from the Train – a more direct inspiration regarding certain parts of the mystery – and Douglas A. Blackmon’s Slavery By Another Name which I’ve used as inspiration for the 1869 story arc.

That book won a Pulitzer Prize and is an important one for anyone who wants to better understand the American South in the decades that followed the Civil War and how those decades still impact people today, particularly black/African American people. It’s quite a far cry from anything I learned in any history class.

Geekosity: Does Regie Collects have input in Isolation, creatively speaking?

Bratton: Absolutely, and in numerous ways. In addition to serving as a sounding board on the story and on the authenticity of the diverse cast of characters, Regie is my primary editor. Regie also had a clear creative vision for an ongoing series that didn’t meander – it had to have clear story arcs, and each issue had to in some way tell a complete story in its own right.

Fortunately, the design of the series is that every single chapter focuses on one (or in many instances, more than one) murder/killing in Isolation, in one of the three years of murder. So Regie’s creative vision dovetailed nicely with mine, but his vision also focuses my writing. I’m never “decompressing” a single murder story to stretch it out into multiple issues. Somebody’s (or some bodies’) are gonna get whacked in every single one!

I would add that comics are a collaborative medium, and Regie’s business sense and marketing skills are as critical to Isolation’s success as my writing and Delia/Elena/Beth’s artist work on the comic. I think that is something that many readers who haven’t been behind the curtain don’t quite understand.

In some ways, Regie is Isolation‘s Stan Lee – and everyone understands that creator’s impact on the comics he touched.