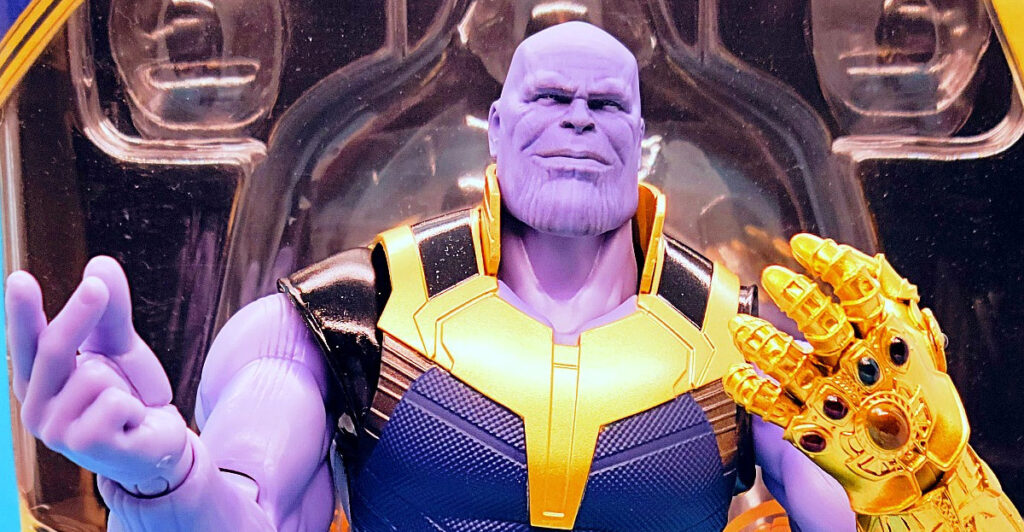 The SHFiguarts Avengers Infinity War Thanos figure is a welcome addition to my collection and a figure that I probably should have purchased sooner. It took a while but one afternoon while working in the Geek Tower, I suddenly realized that I didn’t have an Infinity War Thanos.

I never finished the Marvel Legends Build a Figure and haven’t bought any of the multi-packs that he was in. After seeing several reviews, I decided to pull the trigger on the SHFiguarts version and in spite of a few small concerns, I’m glad I did.

I know this figure has been out for quite a while, but as I’ve only had him for a short time, I wanted to share my thoughts.

Thanos, often known as the Mad Titan, has taken it upon himself to set balance to the universe.

After forcing Eitri to forge a gauntlet capable of handling the power, Thanos set out to obtain the fabled Infinity Stones. His first stop is Xandar, where he destroys the Nova Corps and obtains the Power Stone. Next, he destroys the ark carrying the remnants of Asgard and after defeating Thor, the Hulk, and killing Loki, he obtains the Space Stone. We then learn, after the Guardians of the Galaxy’s ill-fated attempt to stop him, that Thanos has already decimated Knowhere and obtained the Reality Stone.

While this is going on, Thanos has dispatched the Black Order to Earth to find and retrieve both the Mind and Time Stones, but are thwarted by Earth’s heroes. As events unfold, a small group of heroes, including Iron Man, Spider-Man, and Dr Strange encounter and battle Thanos on the destroyed remains of Titan. In order to save Iron Man, Dr. Strange willingly gives Thanos the Time Stone.

Back on Earth, the remaining warriors prepare for a showdown in Wakanda. Earth’s heroes, led by Captain America and Black Panther battle valiantly, in the hopes of giving Shuri time to remove the Mind Stone from Vision so it may be destroyed before Thanos can take it. Thanos himself arrives, and rips the stone from Vision’s forehead, destroying the android and completing the gauntlet. In spite of Thor’s timely arrival with the newly created Stormbreaker, Thanos is able to snap his fingers, and eliminate half the population of the universe, before escaping to a life of satisfied solitude. 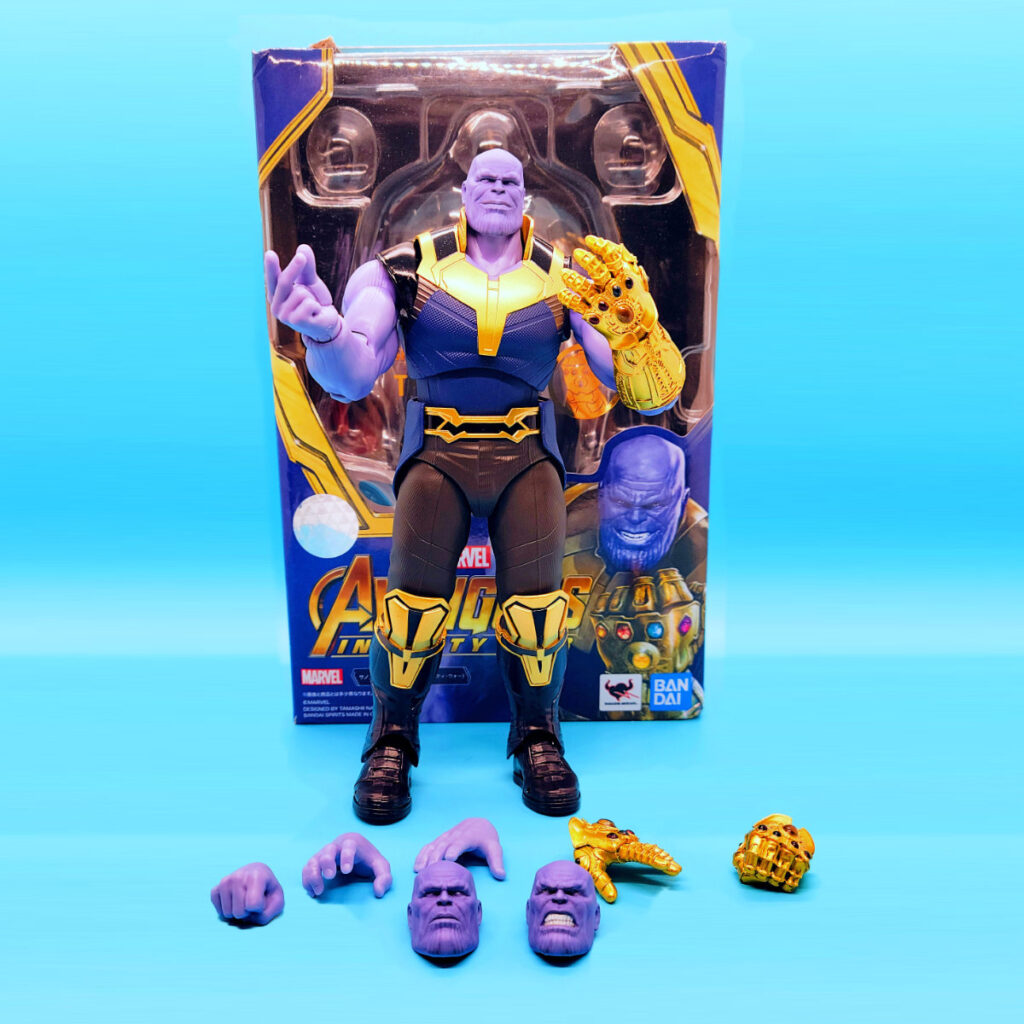 The SHFiguarts Infinity War Thanos is a beautifully appointed figure. He comes with three alternate head sculpts, smiling, neutral, and teeth gritted in rage. Thanos has four right hands: relaxed, grasping, fist, and fingers snapping. He has three left “gauntleted” hands: relaxed, fisted, and grasping. Personally, I’d have preferred to see the gauntlet hand in a finger snapping pose, but I’m certain there were specific reasons why we did not.

Unlike the SHFiguarts Infinity War Iron Spider and Endgame Final Battle Captain America, these are the only accessories with Thanos. Given that he really didn’t have or carry anything else in the movie, I suppose this is all that was needed, so I won’t complain too much about them.

The SHFiguarts Infinity War Thanos is much closer in resemblance to his on-screen counterpart than the Marvel Legends offering. Though I never completed that build a figure, I’ve seen multiple pictures and reviews and am fairly unimpressed with the paint scheme on the figure. That being said, I do really like the amount of work that went into this figure.

Thanos’ skin tone isn’t the deep purple we’ve seen in other offerings but instead is of a lighter hue that is more fitting of the movie. The gold on his tunic, belt, and boots is applied with great care and really fits well with the figure.

The blues and blacks of his tunic are applied cleanly and mine had no paint bleed or mis-applications anywhere. Thanos’ pants are a gray/brown with very fine attention to the sculpted detail. His boots are detailed and the paint applications on them give a nice glossy look, for an almost militaristic appearance. 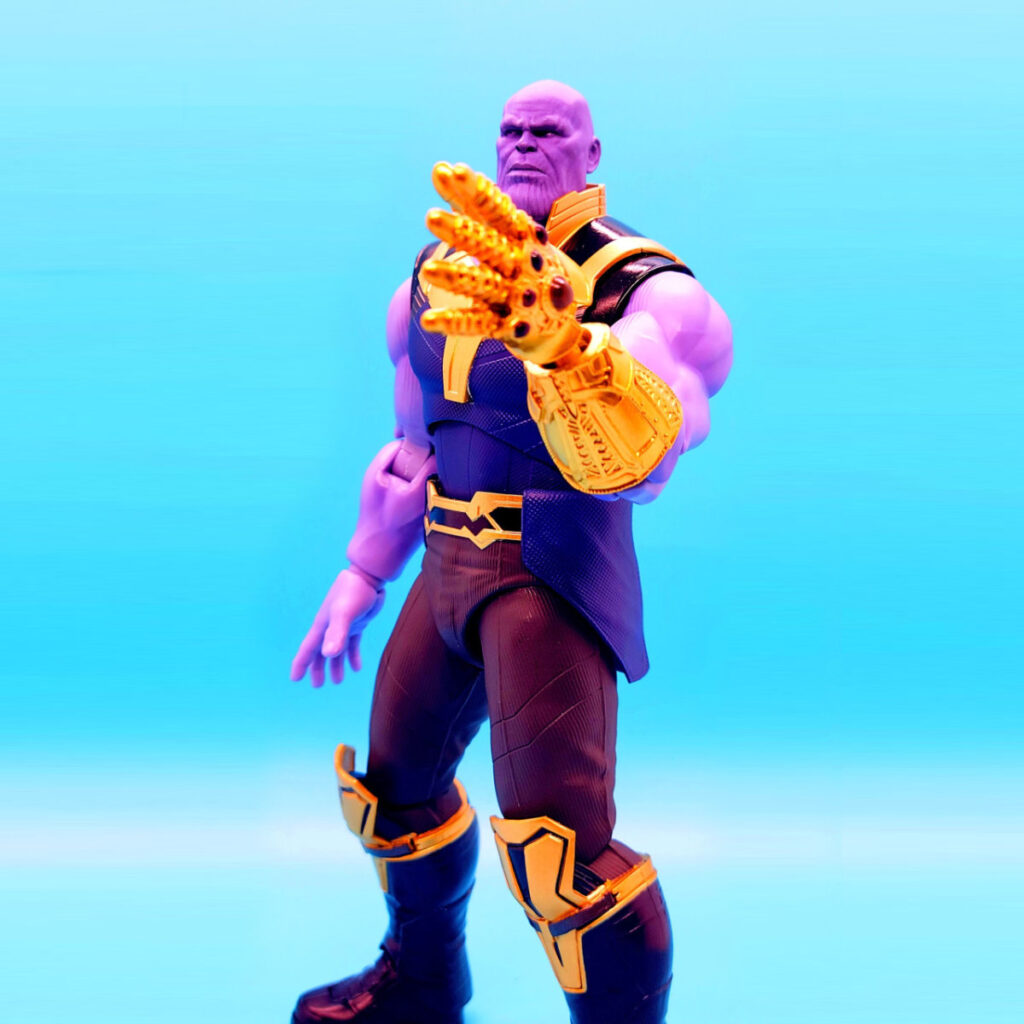 All of the sculpting on this figure is excellent and the detail on his face and arms is exceptionally well done. For me, though, the highlight to the figure is the Infinity Gauntlet itself. It’s an amazingly vibrant gold and each of the six stones are translucent, giving them the actual appearance of gems. My only disappointment is with the Time Stone. It is so small, that the emerald color comes off as black. Otherwise though, each of the alternate Gauntlet hands is done with the same amount of care and detail, giving the figure an incredible level of detail.

The SHFiguarts Infinity War Thanos is a large figure, but is proportionately correct with the other SHF releases. His articulation though, in my opinion, leaves much to be desired.

Typically the import figures greatest feature is the level of articulation, but Thanos is hampered by the character design. His head is on a ball peg as is the neck, however, most of the motion comes from the neck as his collar is high enough to limit the amount of side to side movement he has. You have to lift the chin over the collar to get any decent range, side to side. He can look up very far and coupled with the forward neck movement, can look down decently enough.

Thanos has butterfly joints at the shoulders, but they don’t offer a significant amount of forward/backward movement. His shoulders will raise and lower, allowing you to extend his arms into nice “T” poses and his arms will rotate 360 degrees. There is no bicep swivel, but his double jointed elbows bend in really nicely. 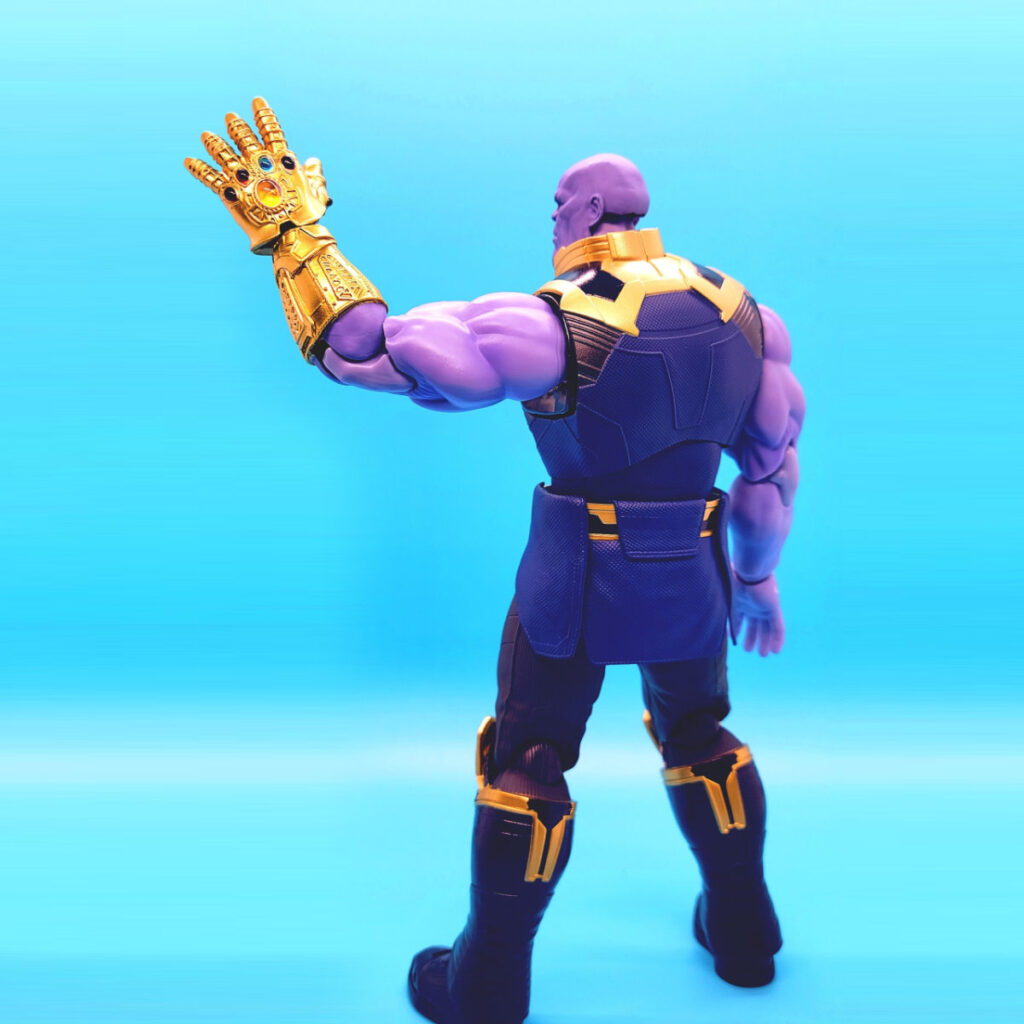 His wrists hinge and pivot and the gauntlet wrist hinge actually pulls out, allowing a greater range of motion for that specific hand. This was done to protect the gauntlet from being scuffed or scratched and I’m grateful for it though when extended it does make his hand look odd. Thanos’ torso has a diaphragm rocker that allows it to pivot and tilt side to side. Forward crunching though, is limited and if you push it too much, it will pop off the ball joint. He also has limited swivel at his waist and virtually no abdomen crunch.

His legs do feature drop down at the hips, allowing him to kick forward a lot, not much backward, and giving him a degree of upper thigh swivel. He can, however, do some pretty exceptional splits, so there’s that. The knees are on a single joint which only gives about 90 degree bend. His ankle joints can pivot but are seriously hindered by the boot design. His foot can bend upward slightly and downward, not at all. Add to that a lack of toe pivot and we have an exceptionally detailed, mobility limited figure.

The SHFiguarts Infinity War Thanos measures fairly well in height against other SHF offerings and does look relatively in proportion with Marvel Legends. He is shorter than my ML Endgame Armored Thanos, but overall, does look nice when posed with my other MCU figures.

I was very fortunate to find mine at a reasonable price, which heavily contributed to the purchase. You can find him at the Big Bad Toystore for about $85, which is on par for these imports. Overall, the SHFiguarts Infinity War Thanos is nice to look at, pleasant to hold, but dynamic poses, I’m left feeling cold.

I’m giving him 3.5 toy boxes out of 5.Thanks for stopping in and reading through! See you all soon, until next time, Geek Out! 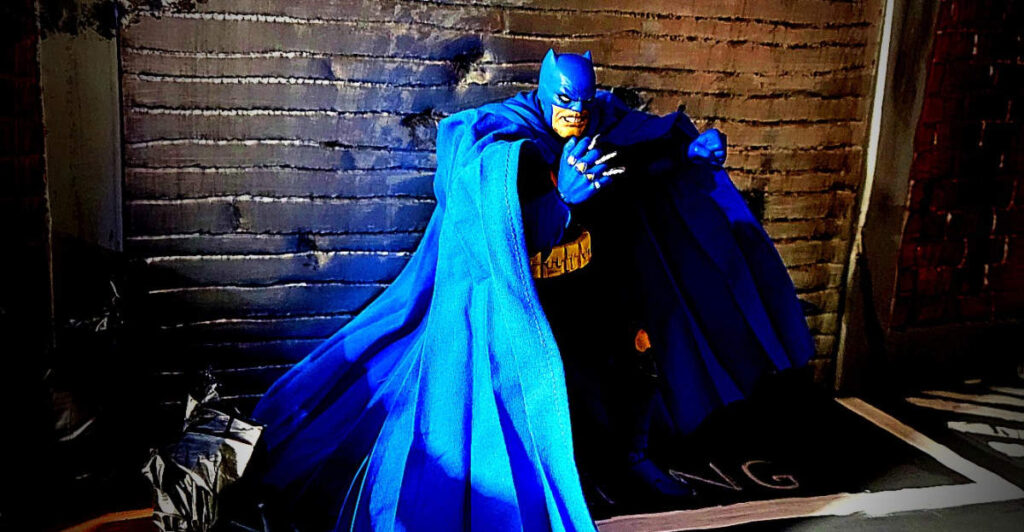