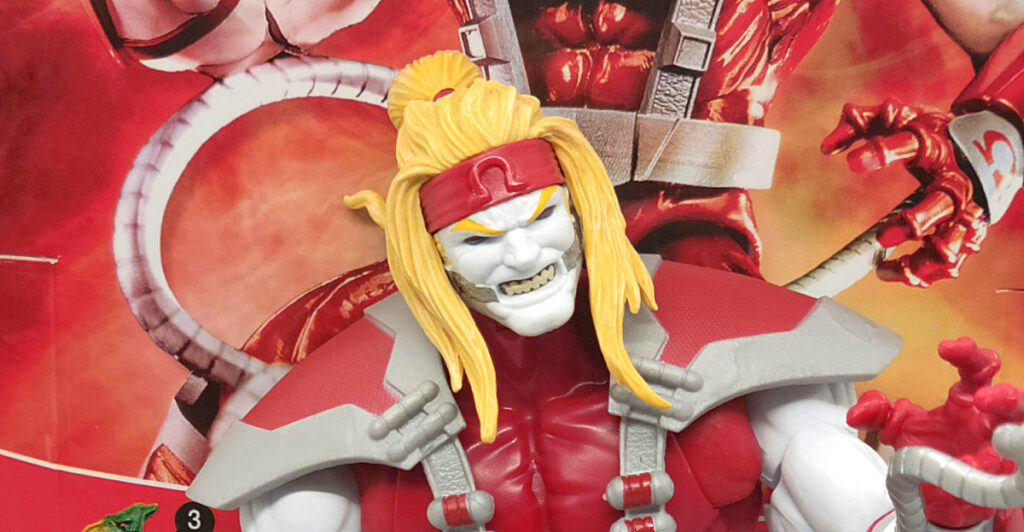 Today we’re taking a trip down memory lane with an oldie, but goodie figure. Dan’s Toybox was surprised for his wedding anniversary when Mrs. Toybox hooked him up with a couple of older figures, so in this review we’ll be looking at the Marvel Legends Sauron Build a Figure Wave Omega Red figure, which was released back in 2018.

Arkady Rossovich was a Russian mutant, with the ability to release “death spores” which can weaken or ultimately kill those they come into contact with.

Omega Red was foiled in his attempt to obtain the Carbonadium Synthesizer, which can help stabilize his condition, but was stolen by Wolverine, Maverick, and Sabretooth.

He has fought Wolverine a number of times and, thanks to his life draining powers, has come dangerously close to defeating the X-Man on a number of occasions.

He comes with one leg for the Sauron BAF and four different Carbonadium coils that can be swapped out in the wrist ports.

While the coils are flexible, they aren’t poseable, but they still look terrific when attached to the figure. 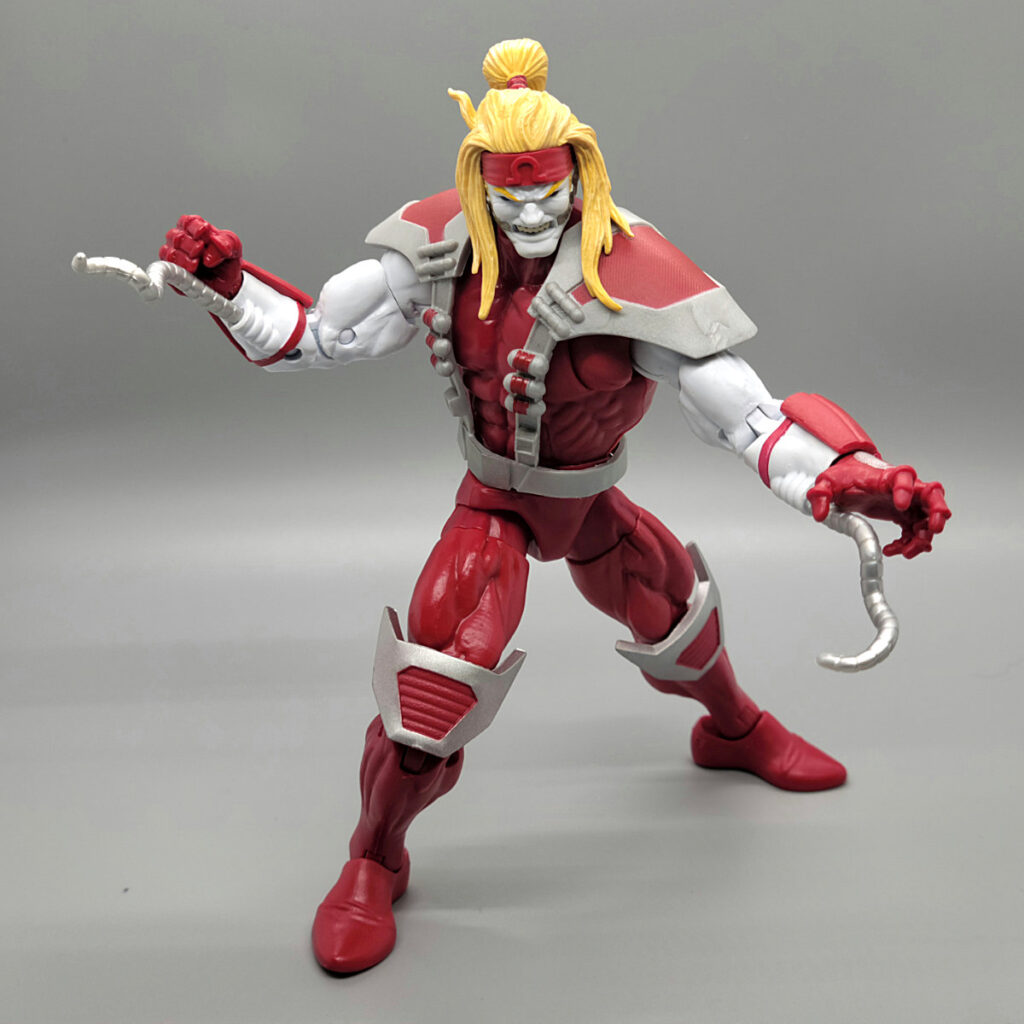 They are silver with detailed sculpting to give them the ribbed look as shown in the comic books.

The flexibility allows you to wrap them around other figures, while still retaining their molded shape and, honestly, they look really good wrapped around Wolverine.

Omega Red himself is detailed very well and the paint applications are solid.

The reds on the figure are a deep hue, but you can see a difference in the legs.

Where the thighs/lower legs attach to the upper thigh cut, you see the red changes hue.

The knees and lower legs are a lighter red than the rest of the figure, obviously a result of different plastic in the molds.

The white arms and face are solid and look really sharp in contrast with the rest of the figure.

His shoulder pads, harness, and belt are molded in grey with painted red highlights and are made of a softer material which is nice, but does hinder articulation.

The detailing on his head band and the silver highlights on his face is meticulous and really emulates the comic book quite well.

Admittedly, my absolute favorite part of the figure though, in terms of paint application, are the eyes, eyebrows, and mouth. 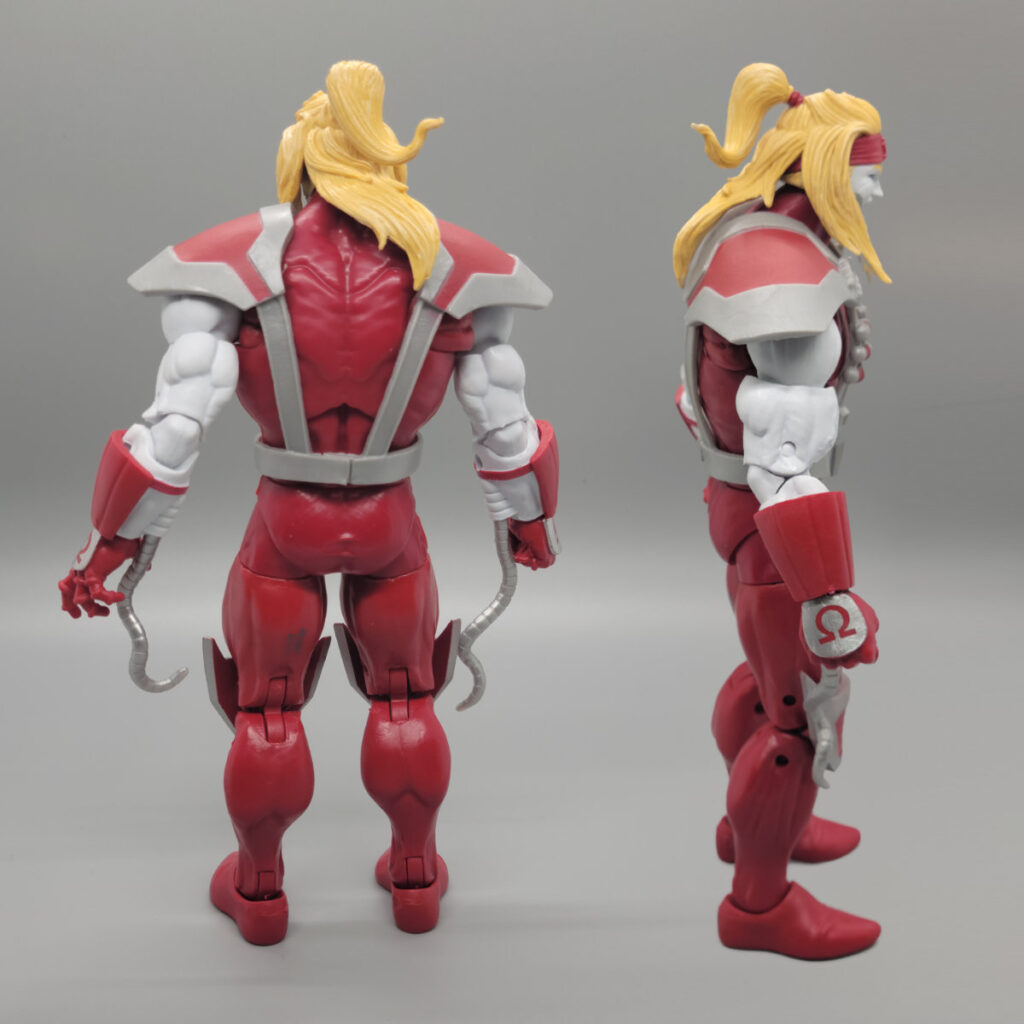 Very specific attention to detail was paid to these areas and it shows!

The gums around his teeth are detailed, the teeth themselves are outlined, subtly, and are just enough of a different shade of white to set them apart from his skin and lastly, the eyes are so finely painted and really look menacing.

I really am impressed with the look of this figure and I’m grateful that my wife surprised me with him as an early anniversary present.

Omega Red’s articulation, on the other hand, is somewhat limited due to the nature of the figure sculpt and accessories.

His head will turn side to side and look up and down, but you’ll have to gently lift the hair to do so.

Overall the limited head movement, in my opinion, makes him look more menacing.

He has shoulders which will rotate 360 degrees, normally, but due to the shoulder pads on the harness, are limited to about 180 degrees forward/backward.

Thankfully though, he can strike a nice “T” pose as his arms will raise to the sides very well.

Red has a very nice bicep swivel and double jointed elbows that bend just a bit past 90 degrees, due to the sculpt of the vambraces on his forearms. 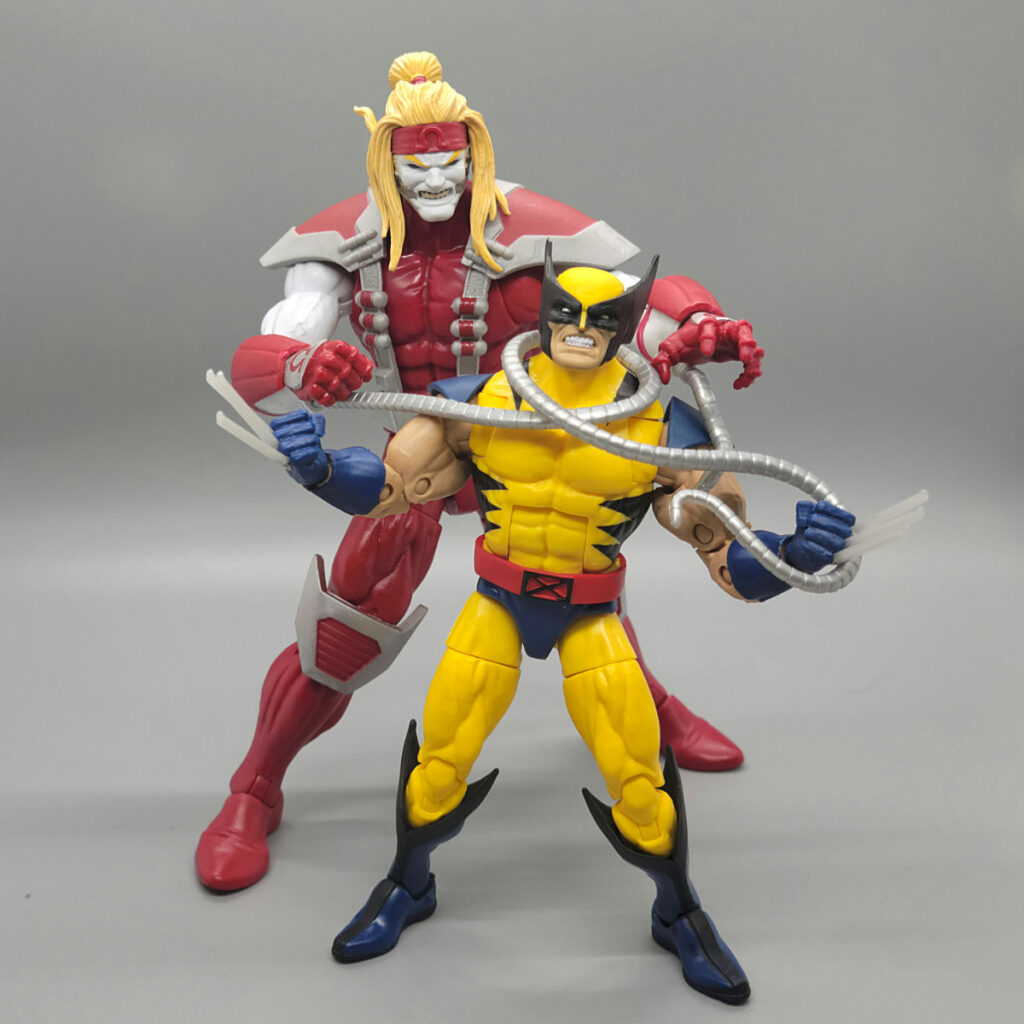 Both wrists pivot nicely but due to the tentacles, hinging is limited.

I actually had to heat mine up to get the hinges moving.

He has no diaphragm crunch, which was disappointing but his waist will pivot, allowing for some good action poses.

His legs will split nicely, a bit past 45 degrees and he features upper thigh cut, double jointed knees and fantastic range of motion for his ankle pivot and hinge movement.

I know this is an older figure, but it’s “new to me” and I am excited to share my thoughts about him.

I’ve posed him with Wolverine and really like the look of them together.

Adding to my mutant villains shelf is always a good thing and finally bringing Arkady into the fold really makes me happy.

Given that he’s an older figure and a little harder to find, you’ll likely pay more for him than the typical Legends retail of about $20. (In fact, my wife did share that he cost around $45 on the secondary market.)

Still though, he’s worth it, articulation limits and all.

I give the Sauron BAF Wave Omega Red a solid 3.75 toyboxes out of 5.

You can find Omega Red on the secondary market, but for all your other Marvel Legends figures, check them out at Big Bad Toy Store. 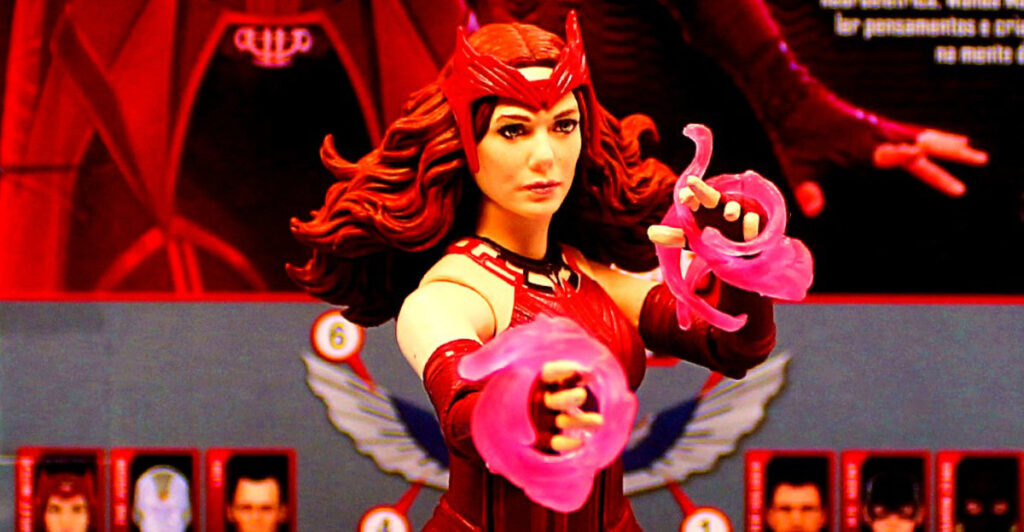