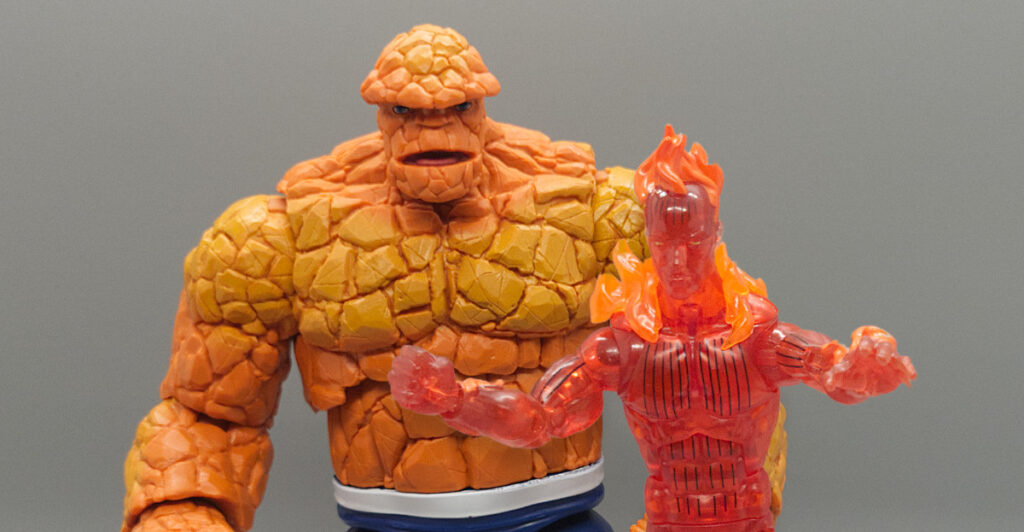 Hasbro’s retro figure wave and tremendous packaging really brings back the nostalgic feel of the Nineties Toybiz figures and the 1994 Fantastic Four cartoon. As much as I like the regular packages for Marvel Legends, the retro card style is a lot of fun to look at and much easier to hang on the wall after opening. Today’s review will focus on the retro wave Human Torch and Thing action figures.

Launched into space in an experimental rocket, Reed Richards, Ben Grimm, Susan Storm (later Richards, after marrying Reed) and her brother Johnny were forever changed after exposure to cosmic rays.

This incredible spatial phenomenon gave each of the four unbelievable  superhuman powers.

Reed’s body became extremely pliable and rubbery and he gained the ability to stretch it to great lengths.

Ben Grimm’s physical appearance suffered the most as he underwent a transformation which turned his body rocky and orange in appearance.

His physical strength and endurance increased far beyond normal human range, thus making him the physically strongest member of the team.

Susan Storm gained the power of invisibility and the ability to project invisible force fields and blasts.

Johnny Storm’s radical change allowed him to entirely turn his body into a living flame, giving him the ability to generate massive amounts of heat, fireballs, and the freedom of flight.

As the newly minted Mr. Fantastic, Invisible Woman, Human Torch and The Thing, the Fantastic Four are truly Marvel’s First Family fighting evil wherever they find it! 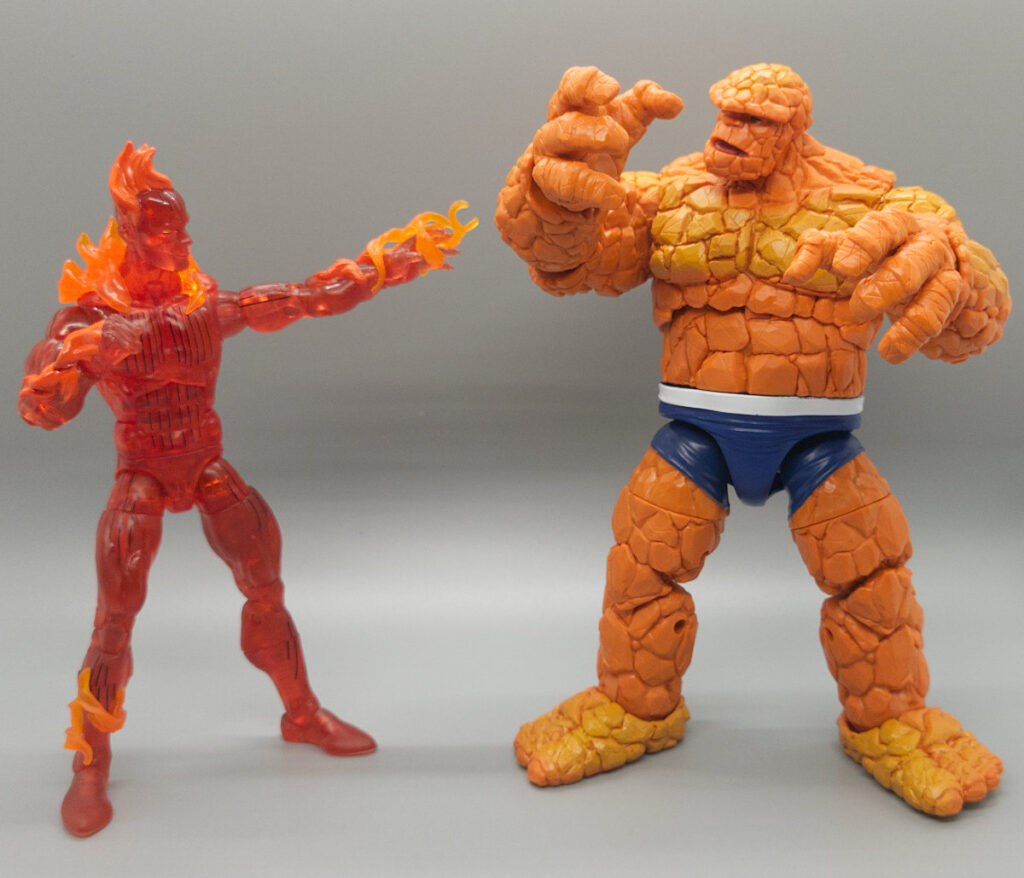 As stated at the beginning, this review will be another two for one as we look at the Retro Wave Human Torch and Thing action figures.

Of course, our measuring stick will be the Triple A of Accessories, Appearance, and Articulation.

I will tell you that of the four new FF figures, these two are my favorites… but I will try to be as objective as possible to give you the best information because, let’s face it, it’s your money and you want to know you’re getting the best for your buck.

So, with that in mind, let’s take a look at their accessories.

The Human Torch comes with three flame effects, which we’ve seen before.

One effect drapes over his shoulders and around the back of his neck.

The other two are flame loops that can fit around his forearms and shins.

Lastly, my Torch had to have been mispackaged as instead of a pair of open hands and a pair of fisted hands, mine had one open hand and THREE fists.

So, if anybody out there reading this has three flat hands and one fist, let me know so we can swap the extras.

The Thing comes with one pair of fisted hands, one pair of grasping hands, a teeth bared angry head sculpt and an open mouthed almost quizzical looking expression head sculpt.

In terms of accessories, the open mouth head sculpt is new but everything else has been seen before with different versions of these figures.

Much like Mr. Fantastic and the Invisible Woman, I’m not overly impressed with the minimal, re-used accessories.

Sorry guys, no “A” for you tonight. 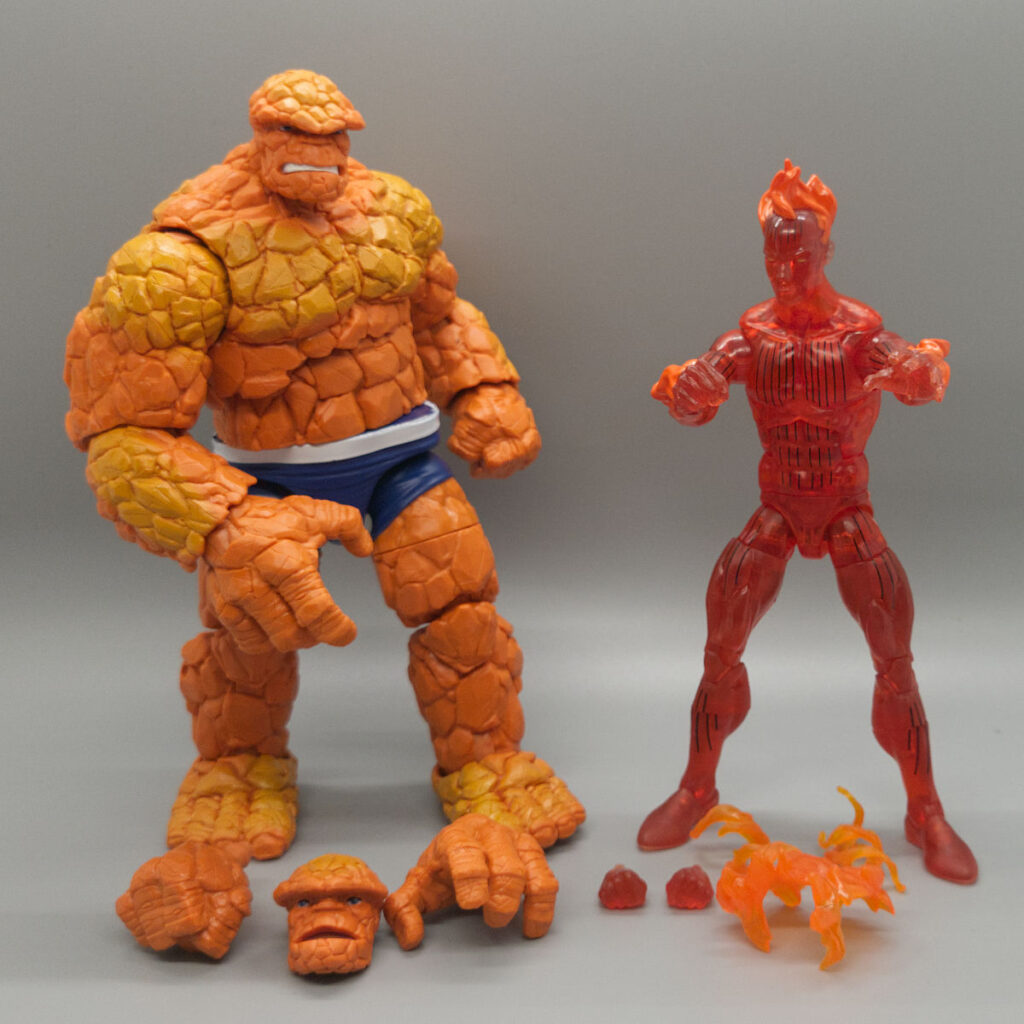 The redemption though, much like with Reed and Sue may well come in the appearance of these figures.

The Human Torch is a beautiful translucent red figure with orange flame highlights and, best of all, black lines painted on the figure.

They really help give the figure a more comic book accurate appearance.

The flames sculpted on the figure are also very well done, though it would have been nice to see some yellow highlights on the flames themselves.

Now, that being said, I saved the best part of this figure’s look for last.

When you look closely at his face, you can see the eyes are yellow/gold which looks simply amazing.

I was really geeked when I saw that and was very pleased with that attention to detail.

The body mold appears to be the Sunfire body, which is slender and not overly muscular, but allows for great flying poses and really is a great base for this figure.

I really like how well done this figure is and though I would have liked to see a bit more of the black lines, just actually having them on him makes the figure look solid.

The Thing, on the other hand, is the exact same body sculpt as both previous versions.

That isn’t a bad thing as this is a very chunky, solid, and well balanced figure.

However, unlike the Walgreens exclusive which had a black wash on the figure, giving depth to the rocky appearance, this version is painted like the Super Skrull BAF Thing, with lighter orange highlights on the tops of his feet, forearms, shoulders, chest, upper back, and head. 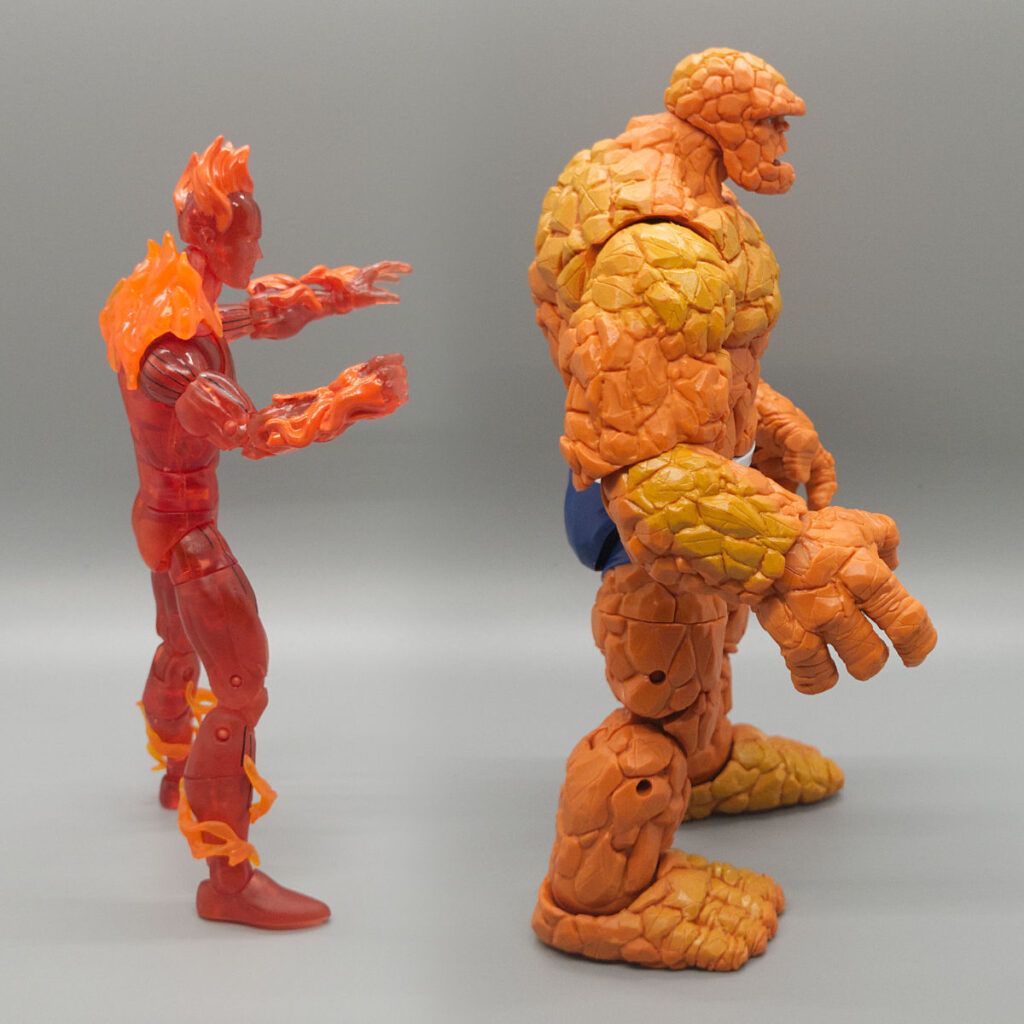 The problem with this scheme is that the rest of the orange is darker and uniform.

The highlights also leave out key areas, which gives the figure an unfinished look to the paint scheme.

My ideal version of this figure would be to see the dark wash applied to highlight the crags and rocky breaks and then use the lighter orange a bit more liberally to cover spots over the entire figure, rather than specific spots, while leaving others completely untouched.

As great as this figure is, the uneven highlighting makes it look half-finished and don’t do him any justice.

On the plus side, his shorts are a nice deep blue with the white belt at the waist.

The applications are clean and do a really nice job of breaking up the orange on the figure.

His faces do both look nice with the blue eyes and solid white teeth on the grimacing version and the pink painted tongue just visible on the open mouth version.

As with previous Thing figures, the attention to detail in sculpting this figure is second to none.

I will say, easily, this figure could step right into the comic book page and there would be virtually NO difference between it and the artwork.

To me, when toy sculptors and painters can reach that level of comic counterpart resemblance, you know you have something special.

Objectively, in spite of the ugly light orange highlights, the sculpting more than makes up for it.

The paint applications on both figures are solid and clean and I will happily give them both “A’s” for Appearance. 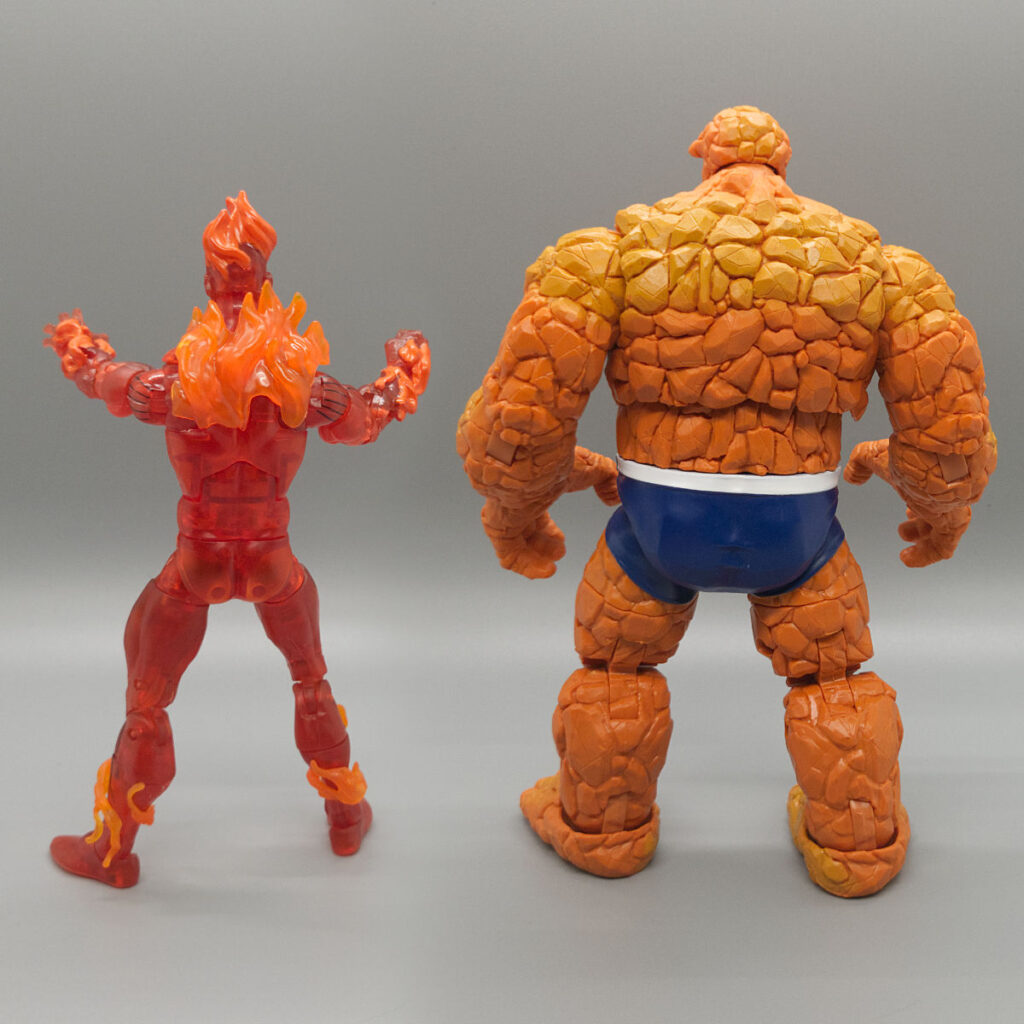 As we’ve discussed the body mold that is used for Johnny, I can say I’m very happy with his articulation.

His head looks up and down very nicely and has no turning limitations.

The shoulders are set on butterfly joints, effectively extending his range of arm movement forward and backward and the shoulders themselves rotate 360 and raise out to just higher than the typical T pose.

Johnny’s bicep swivel works very nice and his elbows are double jointed and bend in past 90 degrees but do run into his biceps, limiting their ability to reach his head. All hands swivel and hinge easily.

Johnny has an upper abdomen crunch and the sculpt and paint design are consistent regardless of which way you tilt his body.

His waist swivels, his legs will do better than 45 degree splits and kick forward very far.

Both ankles hinge and rock nicely as well.

I was very pleased that I had no problems with joints on this figure and he moved really well, right out of the box.

The Thing also has fairly solid articulation for such a bulky figure. 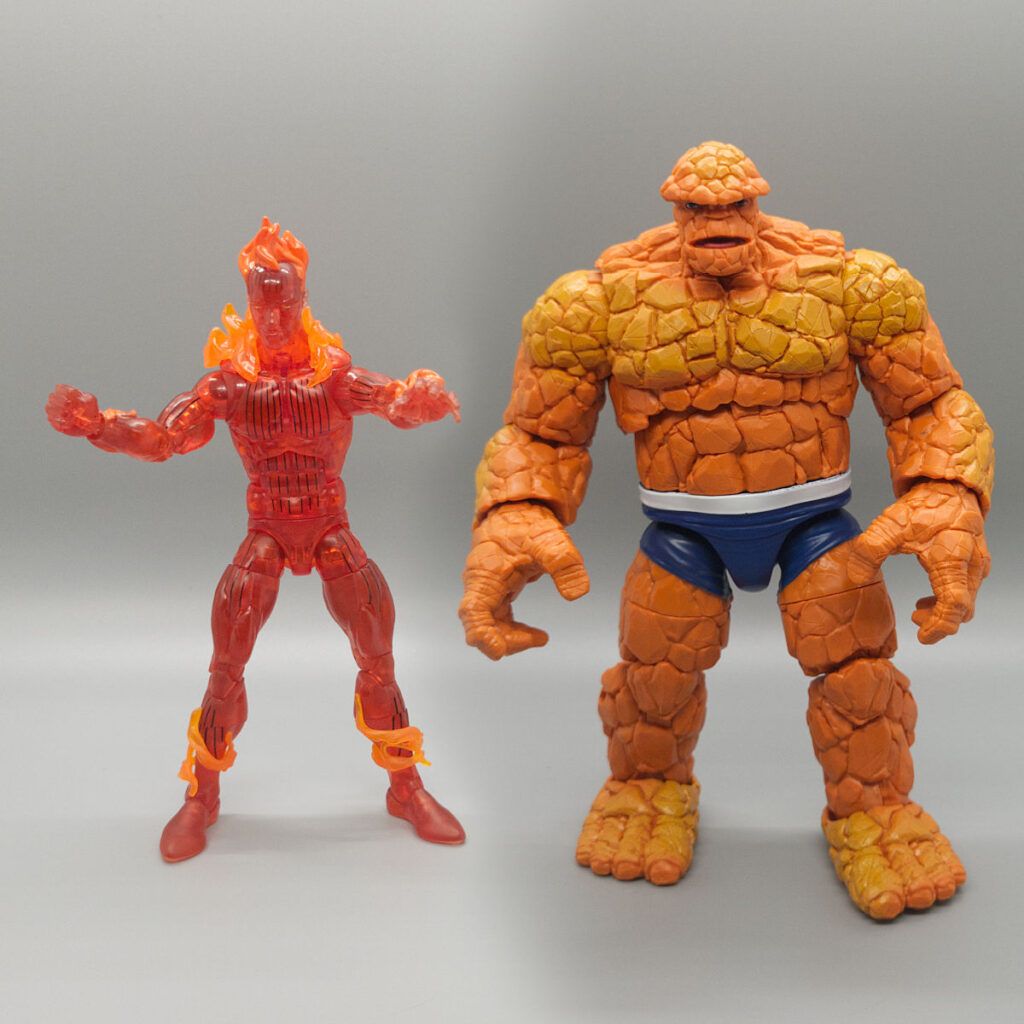 Because of the design of his neck, The Thing will turn his head side to side but has virtually no up or down looking movement.

His shoulders easily rotate 360 and can hit a fairly decent T pose.

He has no bicep swivel, but the single jointed elbow, which bends about 90 degrees does swivel.

His hand design is bulky and the wrist ports kind of limit the hinging movement, but the wrists will swivel nicely.

He has an upper abdomen joint which tilts side to side, can pivot, but offers very minimal crunch.

He also has a waist swivel, which looks somewhat awkward when turned too far, due to the flat cut of the waist.

The Thing’s legs can do surprisingly wide splits, will kick forward nicely but not backward much at all.

His knees are double jointed but the bulky leg design really limits the bend to about 90 degrees, give or take.

His feet do hinge up and down and the ankle pivot isn’t terrible on this figure.

One thing I really like is how well balanced he is.

You can pose this figure in a deep running pose on one foot and he stands very, very well.

Overall both figures can move nicely even with their design limitations.

I will give them both “A’s” for Articulation because, let’s face it, nobody expects a figure as bulky as the Thing to move as well as it does and the body mold for the Human Torch has always had decent articulation. 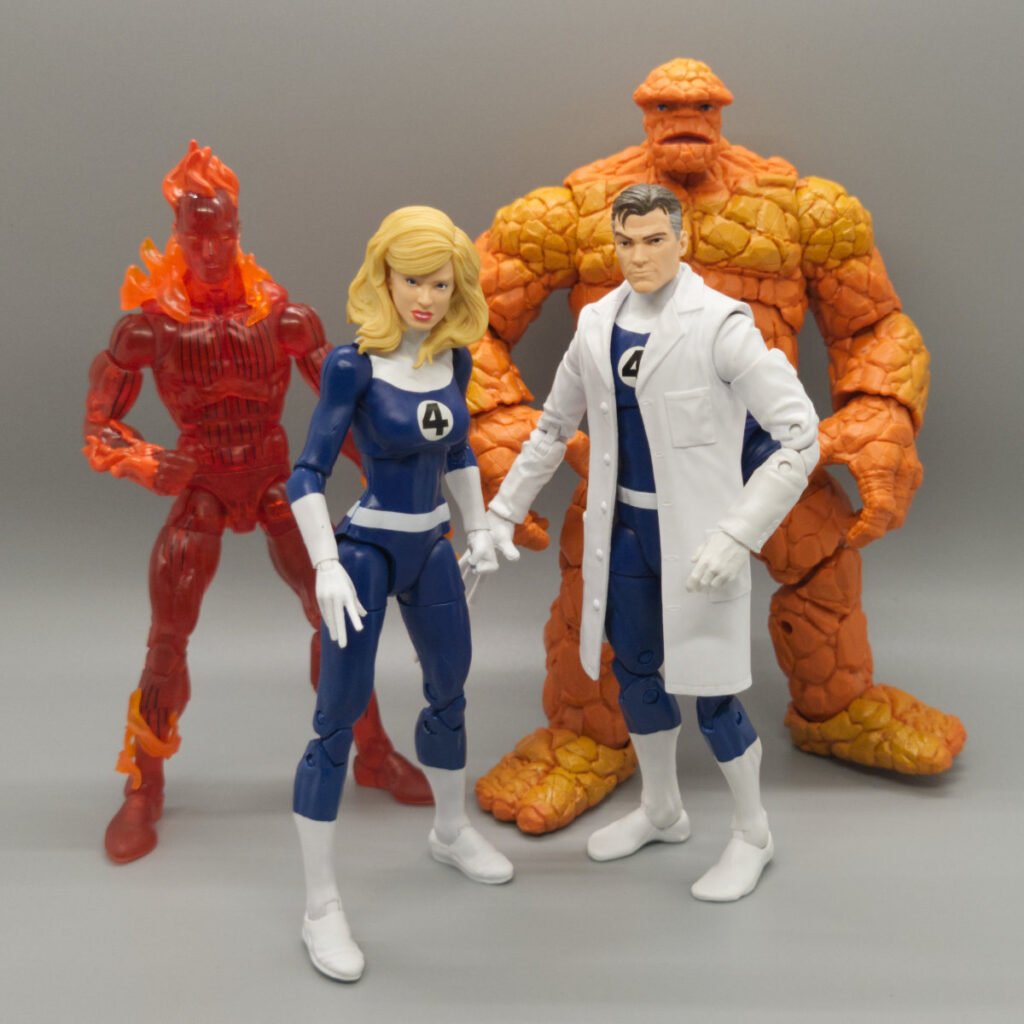 Of the four FF members, I am really the most pleased with these two figures and having paid about $23 for the Human Torch and $26 for the Thing I can say these are both figures that would look nice in any collection.

This wave and other Marvel Legends figures can be found and ordered online at Big Bad Toy Store. 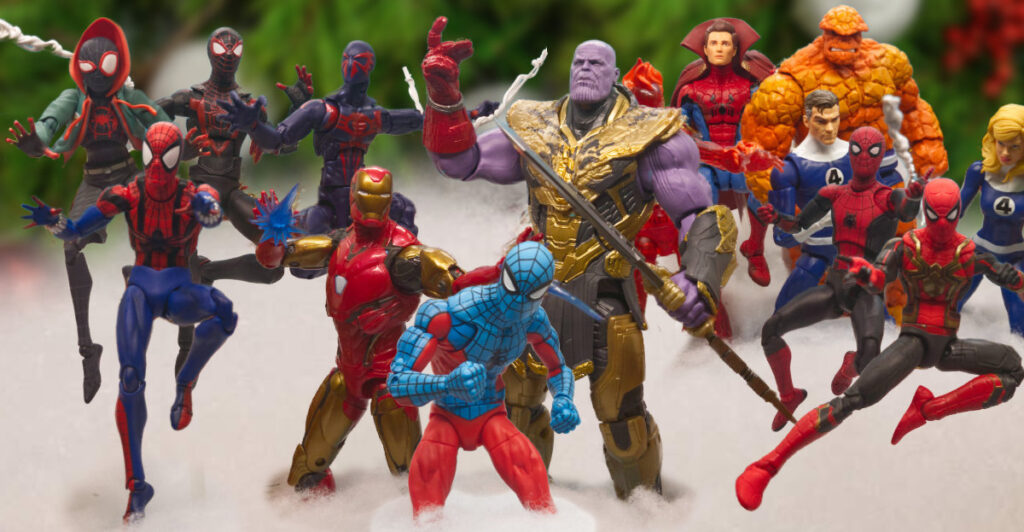