In the game Twelve Minutes, you try to solve the mystery of your and your wife’s death via a time loop. Developed by Luis Antonio, published by Annapurna Interactive.

This game revolves around twelve minutes in your own apartment home.

You can’t leave your apartment, nor can any of your actions go beyond the twelve-minute mark.

The story is focused on the point of view of the husband.

He comes home, he talks to his wife, gets a surprise, then suddenly a cop barges into their home and kills him.

From then on, the time restarts immediately as soon as you enter your apartment home.

Your character doesn’t have any control over the time loop nor is there any explanation about why that is happening.

I won’t be diving into the details of the game, but the more you play around with objects and asking questions, the more that you will uncover why you were killed in the first place.

Trapped in a Time Loop

I think it even plays better if you use a mouse instead of a gamepad.

Movement and action rely on where you place your pointer.

If you point and click at a person, it will engage with a conversation.

If you point and click at an object, you will take or use it.

You can use objects in your inventory to interact with a person.

You are also allowed to use objects within the environment.

What I like about Twelve Minutes is that it’s confined in a single location.

It reminds me of such movies like Devil (2010) where the entire movie just had people inside an elevator, or Buried (2010), was all about a man with his cellphone trapped inside a wooden coffin.

Add in a mix of Groundhog Day (1993) or Edge of Tomorrow (2014) where time loops, where in that movie the day repeats over and over.

While in this game, the time loops in only twelve minutes.

I really enjoyed the idea; the concept of it. I love the idea of one trying to uncover a mystery.

It keeps you on the edge of your seat wanting to figure out what can you do to change the time loop.

Personally, regardless of how short the twelve minutes is, I was surprised how may hours I was already playing in the game.

Like at the start of the game you still have to do a lot of actions to convince your wife that you are repeating the events, but later on, you just have one thing to say and it all rushes all the details in, giving you more time to focus on other things.

I’m not sure though if some people are open to this concept of time loops with such a short amount of time.

And it can be fun if executed correctly.

So, it really depends on the player if they are willing to go back in time and look for that action that will trigger a change in the time loop.

Look at all the decor

The visuals of the game are very simple.

The location has this semi realistic feel.

But since the environment in the game is generally static, the game resembles the feeling that it’s unreal.

It can have that cinematic feel, if you like independent experimental movies.

You’ll notice that the walls are not perfectly painted.

The intro hallway of the game has an interesting nod to the classic horror movie, The Shining (1980) because of the floor pattern. 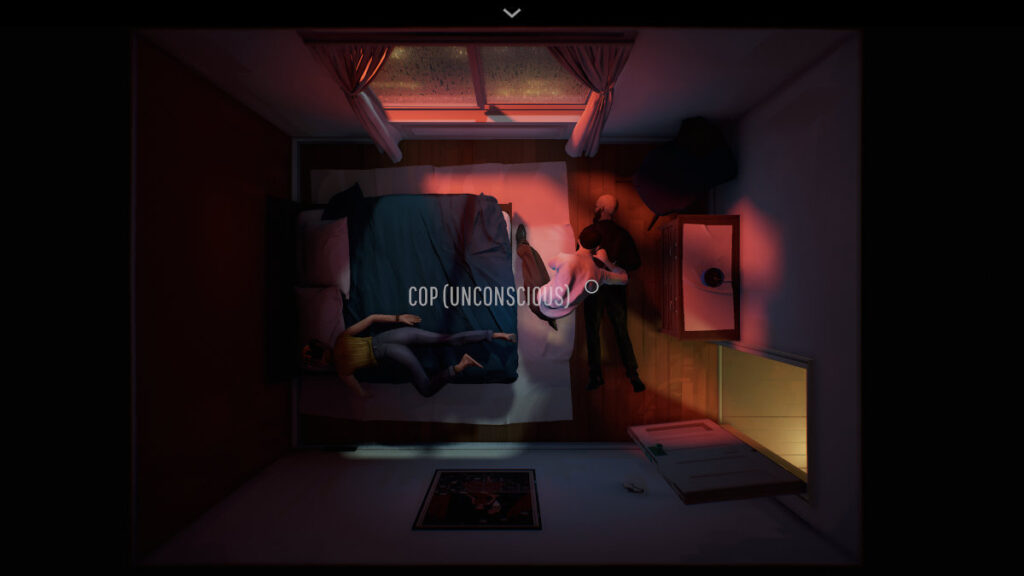 The raindrops on the window look very real though.

The background is not the problem for the game.

It’s the animations of the characters themselves is what threw me off.

They move awkwardly throughout the entire game.

But if you can get past that visual weirdness, the game shouldn’t bother you as much.

In general, what needs to stand out in this game is the audio, it had to be one of the most believable things to make the game work.

Since the visuals is already limited to using the top view of your apartment home.

In most cases, it does the job well.

Music is subtle but it works and there are musical triggers that do remind you that you are progressing within the game.

If you have your headphones on, sound effects can also keep you updated on the time too.

It was impressive that they got top talent with James McAvoy (X-Men, Split) as the husband, Daisy Ridley (Star Wars, Chaos Walking) as the wife, and Willem Dafoe (Aquaman, The Lighthouse) as the cop.

Note that they did the recording during the start of Pandemic, so the lockdowns made it a little difficult to do the recording sessions.

In general, they sound great. It has great emotion, impressive impact.

I love Willem Dafoe’s voice, it seems that he can do no wrong.

However, I cannot say the same for the voice of James McAvoy when he cries out in pain when his character’s hand was being twisted.

It sounded like they used the wrong take on that particular moment.

And this moment is something that you will see and hear regularly too and it can get cringy to me.

You would presume that since his character has been going through this on a series of repeats that he would have gotten used to it at some point, or at least his cries would change the more the game repeats.

It would have been funny and actually realistic if you can hear him getting tired of getting handcuffed at some point, but no.

For the asking price, your mileage to Twelve Minutes may vary.

It does seem strange though that the Philippine price on Steam is actually pretty good (estimated at $11.44).

But the general price of $24.99 may be a bit too much for some for a game that generally repeats itself, and it’s actually quite short once you know what you are doing.

You can actually finish the game normally in 6 to 8 hours if you are experimenting on your own, but if you are pretty good with adventure games, it can get a lot shorter.

I was playing this game mostly on the Xbox Series X, but I also did try the PC version on my laptop.

And so far, the cross save function will sync without any issues.

Although I have heard that some people have experienced crashes while doing this, I did not.

It seemed like it relied a lot on motion blur to make it look smooth even though I think my system seemed to run slower than 20fps.

It’s a good thing that the game doesn’t try to rush you in general, but still, you need to keep track of your time.

It’s a great game in general, but the ending has a twist though it may feel forced.

The way it’s built up is interesting enough.

Even though you loop twelve minutes of your time, the game will draw you in as you uncover more details the more you play.

There are a couple of other endings too.

But since the game only does autosave, to see the other endings you will have to repeat the entire game which can be too tedious.

Even if you knew what to do, it can still take less than 2 hours to get through before getting to the end.

I wish they added a feature to save the game just before the end.

That way you can do the other choices too, because to repeat the entire game just to change one point at the end is too much for some people. 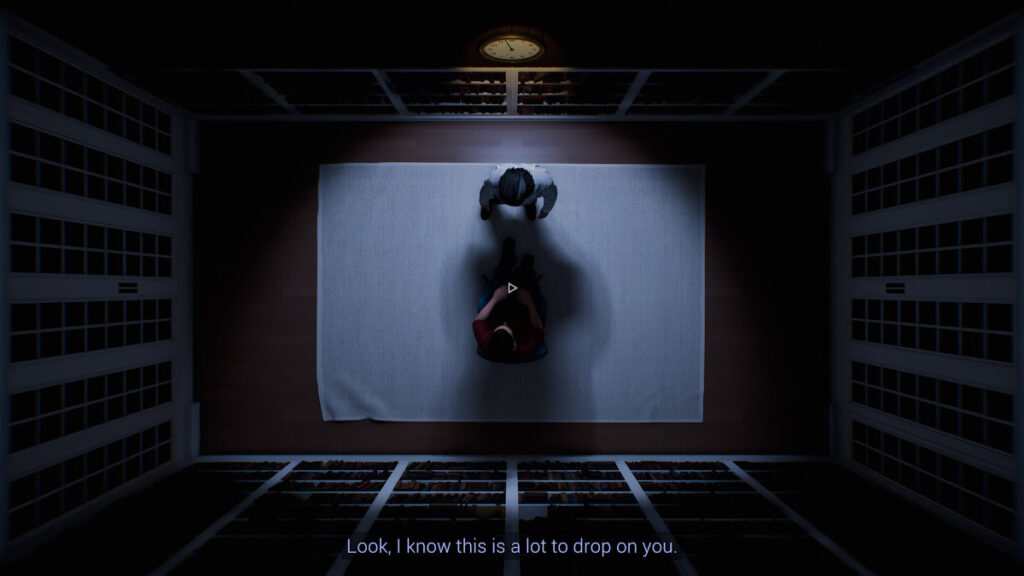 Would I recommend playing this?

Yes, at least once.

It has a very engaging story, and it does get you hooked when you unlock something that can progress the story.

Further, it does feel you are playing an episode of Twilight Zone which I enjoy a lot (even to this day).

I was torn on giving this game a high rating, but the price point was pulling it down.

Especially if I have to consider it’s general price, it just feels a little too much.

It’s like comparing a TV episode versus high budget movie, and Twelve Minutes is a very good TV episode.

Twelve Minutes is available on the PC through Windows, Steam and on the Xbox Series console. 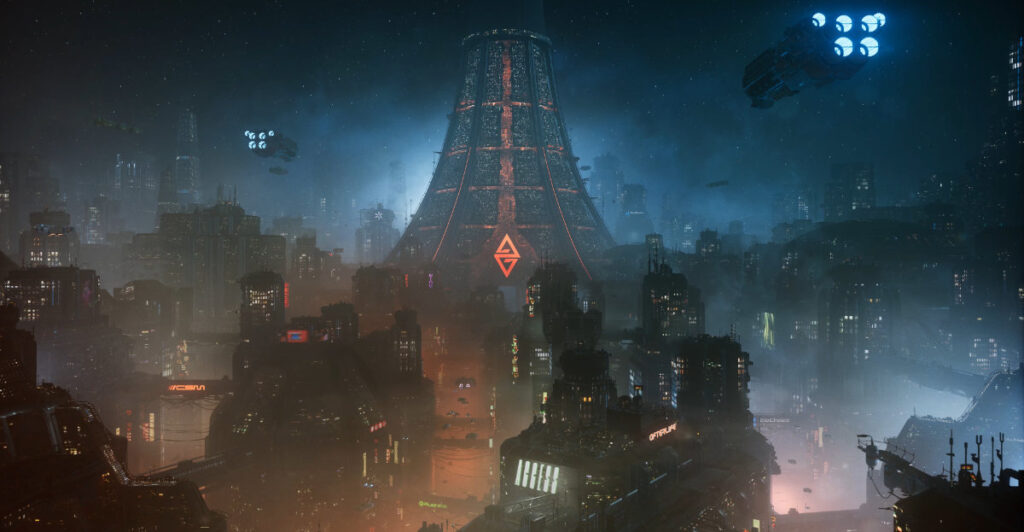