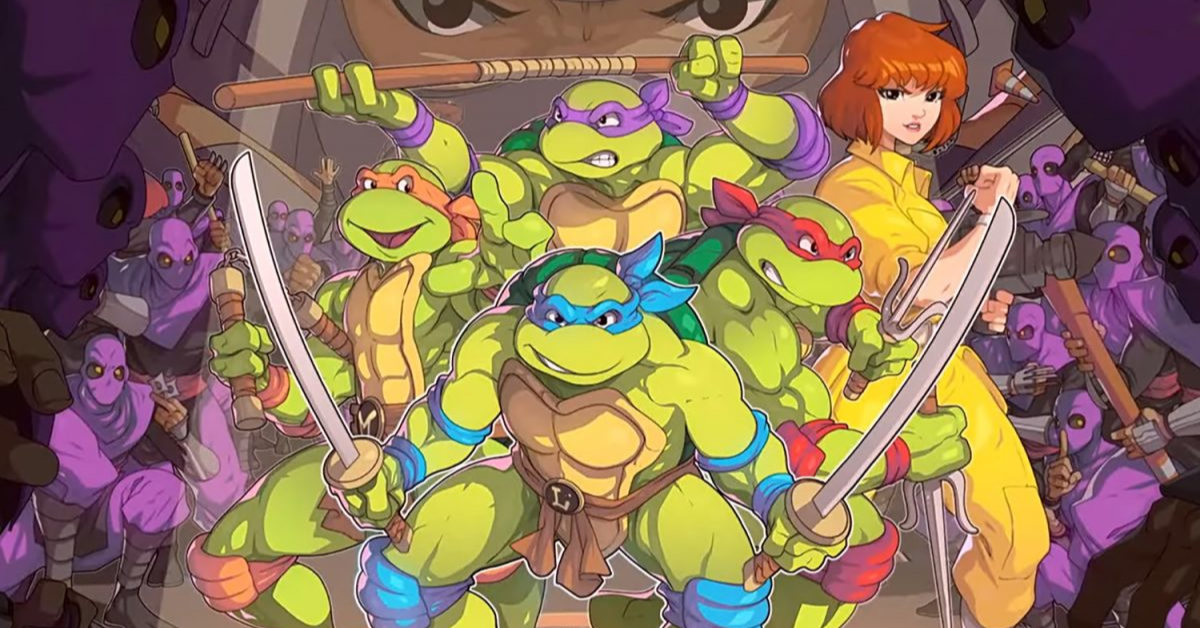 Let’s talk about the latest beat ‘em up game Teenage Mutant Ninja Turtles: Shredder’s Revenge by Tribute Games. Will this be the one to put TMNT back in the limelight? Cowabunga!

I’ve been a fan of the Teenage Mutant Ninja Turtles ever since I saw the Mirage comic books. I was also weirded out with the Archie comics, but then again, I knew that this was because of the popular cartoon at the time. I remember playing the first TMNT game on the FamiCom (NES for the US) under Konami (or Ultra Games if you are in the US). And when I saw the first TMNT arcade, I enjoyed it to its fullest and I couldn’t wait to play it on the FamiCom. And when I saw TMNT 2 Turtles in Time in the arcades, my brother and I used so much coins in it that we finished the game on our first playthrough. We loved the game, we loved the experience. 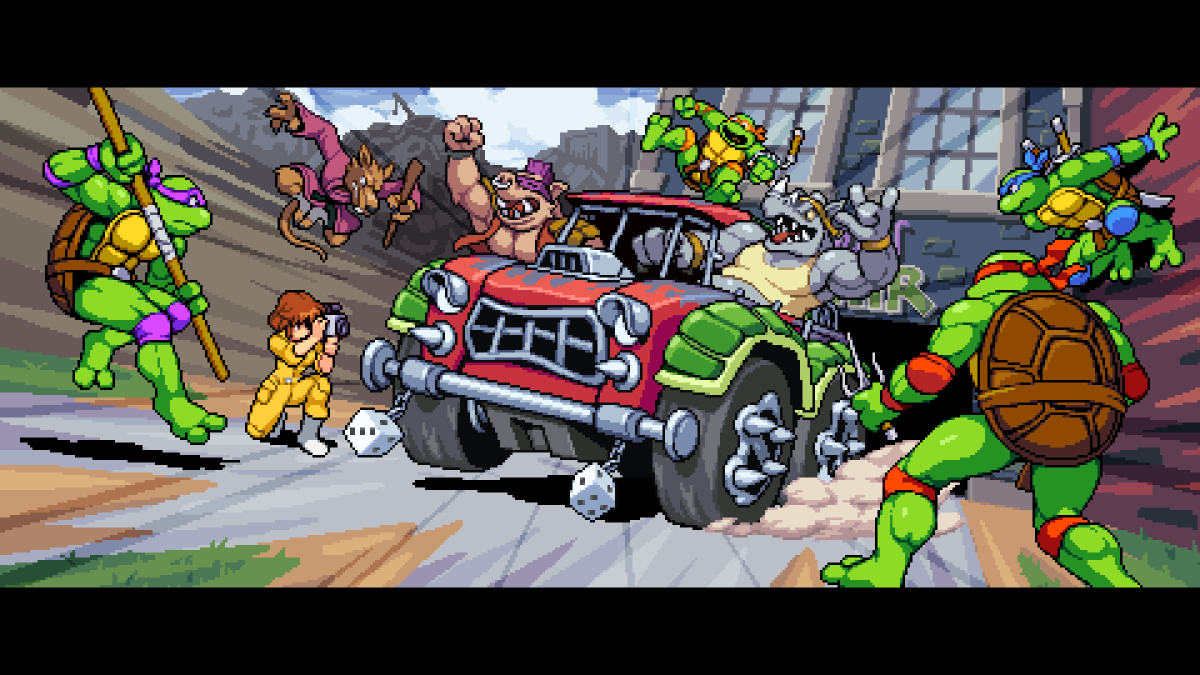 Personally I think Turtles in Time was the highlight of my experience with Teenage Mutant Ninja Turtles games. I even enjoyed playing the SNES port which from what I remember had a few more levels than the arcade version. I remember the Sega Genesis had their own game called Teenage Mutant Ninja Turtles: The Hyperstone Heist which was a different game. But it was obviously heavily influenced by Turtles in Time.

There were so many TMNT games that came out since, I’ve played some of them here and there, but nothing has captured the same feeling I got with Turtles in Time. I remember that Ubisoft even tried to remake Turtles in Time with 3D graphics but failed badly.

Now, a new game by Tribute Games has made Teenage Mutant Ninja Turtles: Shredder’s Revenge. It’s a game which is heavily inspired from Turtles in Time and some elements of older Konami games.

Heroes in the Half Shell

It’s pretty much a straight up arcade style beat ‘em up brawler. The controls almost feel the same, but the game introduces you to newer controls. You can play the game like how you played the classic arcade games, but there is a definite feel that the game has something deeper. The original arcade games were designed to chug a ton full coins from you. So, the old games were just there to make things difficult for you. But this time, the controls have something more with a little more abilities.

This makes sure that this game feels more skills based. Because of this, you can pretty much master the game without taking massive damage. But it’s fascinating that regardless of how you play it, you can have fun all throughout. So, if you want to play it like a brawler, it’s fine.

But if you want to understand the enemy patterns and figure out how to defeat each opponent, you can do that too. In the arcades, when you use your most powerful ability, you lose a bit of health. But here, you only need to charge them up. There is no loss in your health. 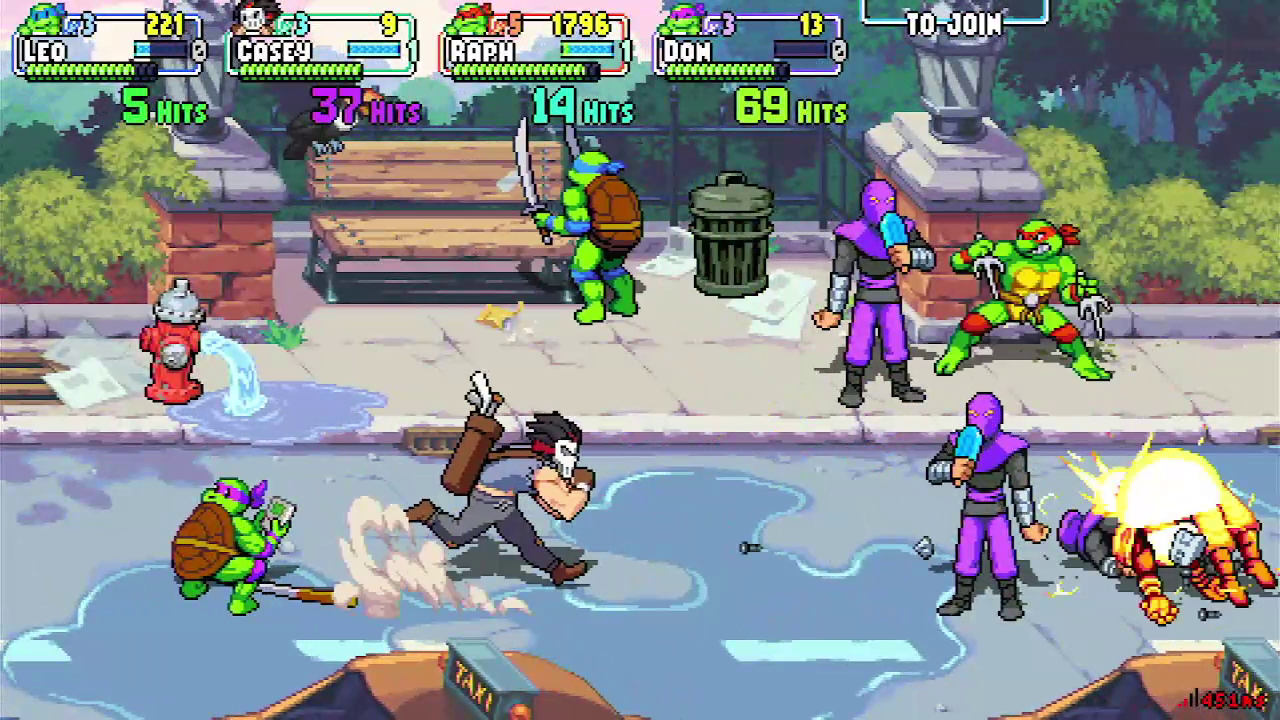 While the arcades only allow you to play the turtles, which is already fun on its own. This game allows you to play up to 6 players. Yes, now you can play April O’Neil, Splinter and later on, you can unlock and play Casey Jones.

Teenage Mutant Ninja Turtles: Shredder’s Revenge can get pretty chaotic. If you are playing alone or with a couple of friends, mastery is the best way to get through. But the game has the option to get up to 6 players. This is chaotic, but at the same time, it’s fun.

Mastery of the enemy patterns can almost go down the drain when this happens. Mainly because there are so many of you, it’s confusing where to look, especially if you choose any one of the turtles. I wish they made the color of the turtles similar to their toy version of the Kenner toys back in the day. Each turtle has a different tint of green making them distinguishable from each other. But in this game, you just rely on their masks and other little details.

From a visual standpoint, if you are in a large group, it’s better to play as Splinter, April or even the unlockable Casey Jones. Since they look very different from the turtles.

It all sounds Bodacious! 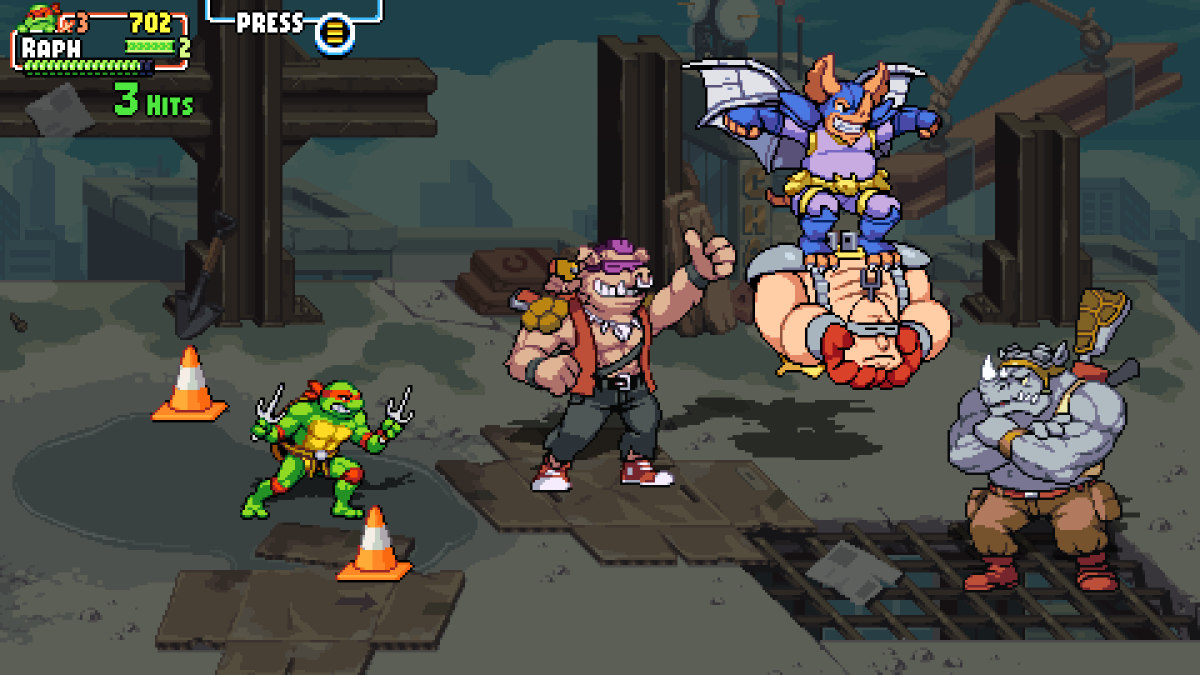 I really have to commend the audio for this game. The music really stood out, other than they got vocal artists who got the feeling right out of the 80’s and 90’s. They remade the intro music from the 1987 cartoons. I mean, they could have used any version, but remaking the original cartoon music means that they are targeting the people who loved that generation of TMNT.

They also got the music that feels very much like a tribute to the arcade games and a bit of the original NES game. Like even just the first level music sounded very close to the intro cutscene music from Turtles in Time. Every level has a nod to the old games. The composition by Tee Lopes is incredible. Some levels do have songs by artists. They even got Mega Ran, Mike Patton, Ghostface Killah and Raekwon (both from Wu-Tang Clan). The song “We Ain’t Came To Lose” by Ghostface Killah and Raekwon is pretty much a tribute to the first ever TMNT game.

If that’s not enough, they even got the original voice actors of the 1987 cartoons to do the voices in the game.

While another beat em up game like Street of Rage 4 made their style more hand drawn look, Tribute Games went for pixel art. Streets of Rage 4 is just a sight to behold and it is lovely on a 4k screen, but in contrast TMNT Shredder’s Revenge is a pure callback to the age of the SNES era. The game relies on retro style 16 bit pixel art style graphics.

There are times that I am getting tired of this visual style. But it works very well in this game. Because of this, it feels like the game is a proper sequel to Teenage Mutant Ninja Turtles: Turtles in Time.

It gives you that feeling of going back to the arcades and playing with friends. The look is obviously not exactly the same, it has been highly improved in Shredder’s Revenge. They look more like cartoons because of the character outlines. There are also small details that make each character stand out. Even throwing an enemy to the screen replicates that feeling of SNES’ mode 7. 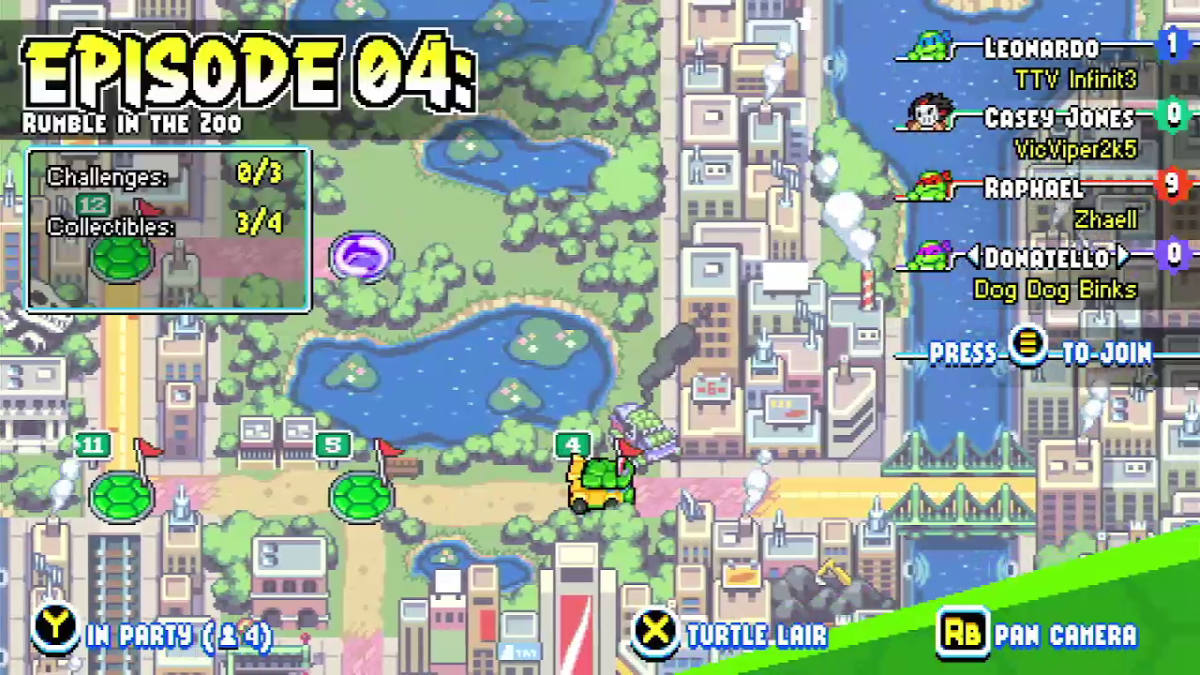 There are two game modes, Arcade and Story. Both games can be played with one to six players. While Arcade is pretty straight forward, this basically replicates the feeling of playing at the arcades. You have a few lives, you have all the skills and try to beat the game level by level, no continues, no save.

While the story mode adds a little more with a city map view where you can choose to play any previously finished level. This part actually reminds of the original Teenage Mutant Ninja Turtles game which also had a map where you drive around using the Party Wagon. Skills, power, extra lives and health are unlocked once you reach a certain number of points. Each level has items to find and challenges to try. You are allowed to use another character and level them up even on finished levels.

The game offers couch co-op on current gen consoles and on the PC. You only need enough controllers to get them all running. On the PS4 though, there is a limit of 4 players when playing on a single console. But 6 players are still allowed on the PS4 if you play online. Crossplay is only available on the Xbox and PC. Sorry, it doesn’t have that option on any of the other consoles.

The game is very short, like you can finish the game in just a couple or more hours, but again, it is designed to simulate being in the arcades. It’s made for you to sit down with friends and play together and finish the game in one afternoon. The game can be replayed especially when playing with friends. But when talking about the single player, it can get pretty old quick. Yes, you can finish the hidden items, find some of the turtles’ friends and try finishing challenges. But it feels repetitive pretty quickly because the main game itself is short. 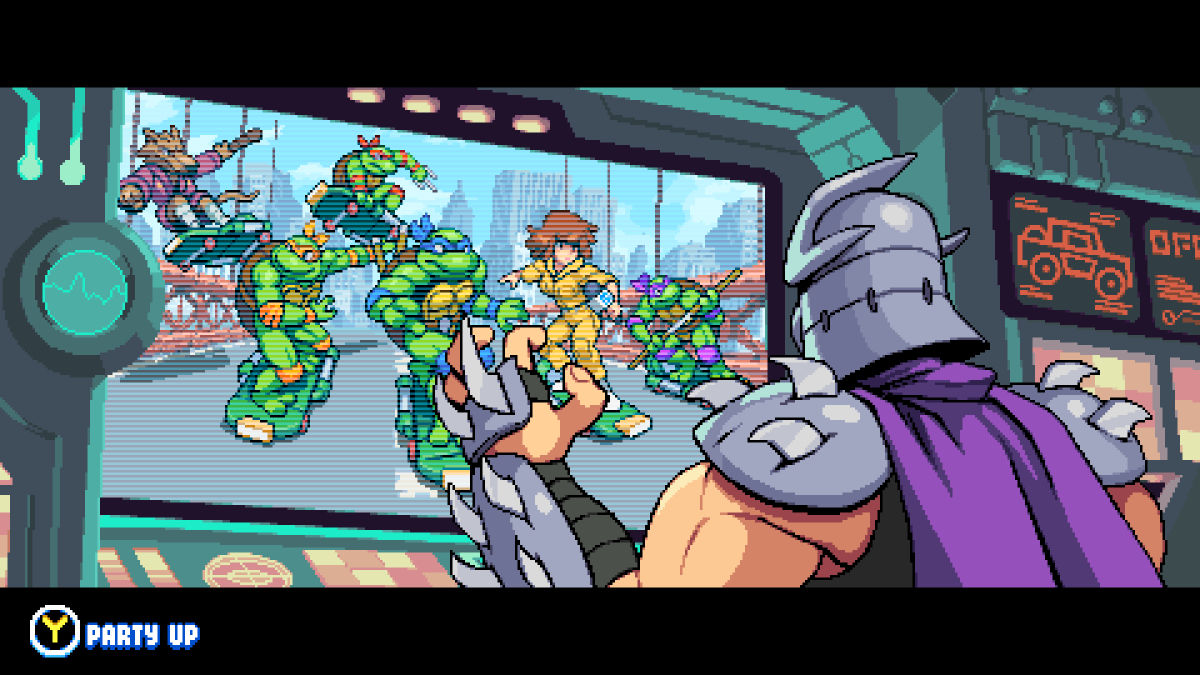 What can I say? The Teenage Mutant Ninja Turtles: Shredder’s Revenge feels like a love letter to a specific generation of TMNT fans, but at the same time incorporating modern elements. From the music, voice cast, graphics, the gameplay, there is no question that they made this with so much love and care. Yes, the problem of the game is basically it’s just pretty short. But that short period of time, it’s a pretty amazing experience.