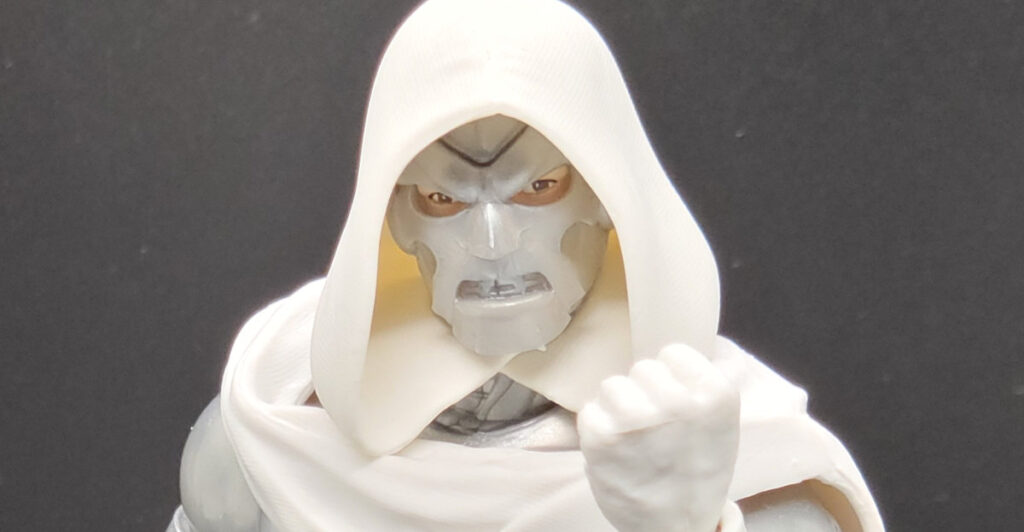 Hasbro has finally brought us a pretty amazing wave of Super Villains. As it stands, I’m only three figures shy of completing this wave, which I really hadn’t thought I’d end up buying. Let’s take a look at the Marvel Legends Doctor Doom Super Villains Wave six inch action figure. As we know, there is only ONE Doom and he’s no schlocky video host.

The name alone is enough to send a shiver up the spine of many a stalwart hero.

Scientist, magician, despot… are but a few of the words used to describe Reed Richards most vengeful foe.

Now, after stealing the Beyonder’s omnipotent abilities, Doom can call himself Supreme Ruler.

Using these stolen powers, Doom created an entirely new reality from all the remains of multiple worlds’ destruction.

This new reality was named Battleworld and under Doom’s control existed as several domains, ruled by Barons or Baronesses appointed by Doom himself.

Travel between the domains without permission was a crime and disputes were settled before the throne of Doom himself, and his Sheriff, Steven Strange acting as prosecutor and judge.

Doom retained the power to also decide any dispute himself.

Can the same be said of his new action figure? 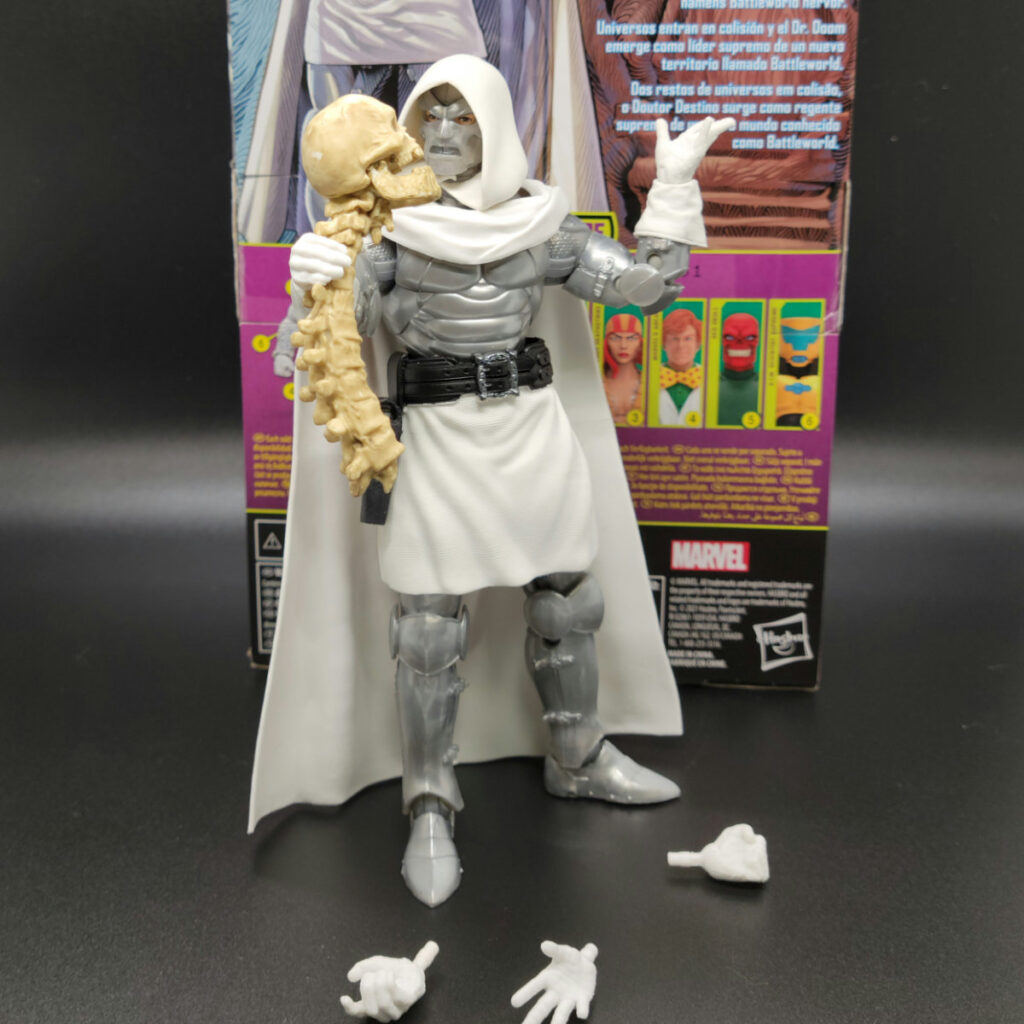 Consisting of Dr. Doom, Lady Deathstrike, Dormammu, Arcade, the Red Skull, AIM Scientist Supreme, and The Hood, we are finally given some serious firepower to compete with our heroes.

The Build A Figure in this wave is Xemnu, who I must admit to knowing very little about.

Of this wave, I currently only have Skull, Deathstrike, AIM Scientist Supreme, and now Doom, but with that being said, I don’t imagine it will be long before I purchase the final three to complete the wave and BAF.

I decided to grab Marvel Legends Dr. Doom just a few days ago on a whim and initially was very happy to have picked him up.

Let’s jump into the review and see how Doom fares with his Triple A; Accessories, Appearance, and Articulation. 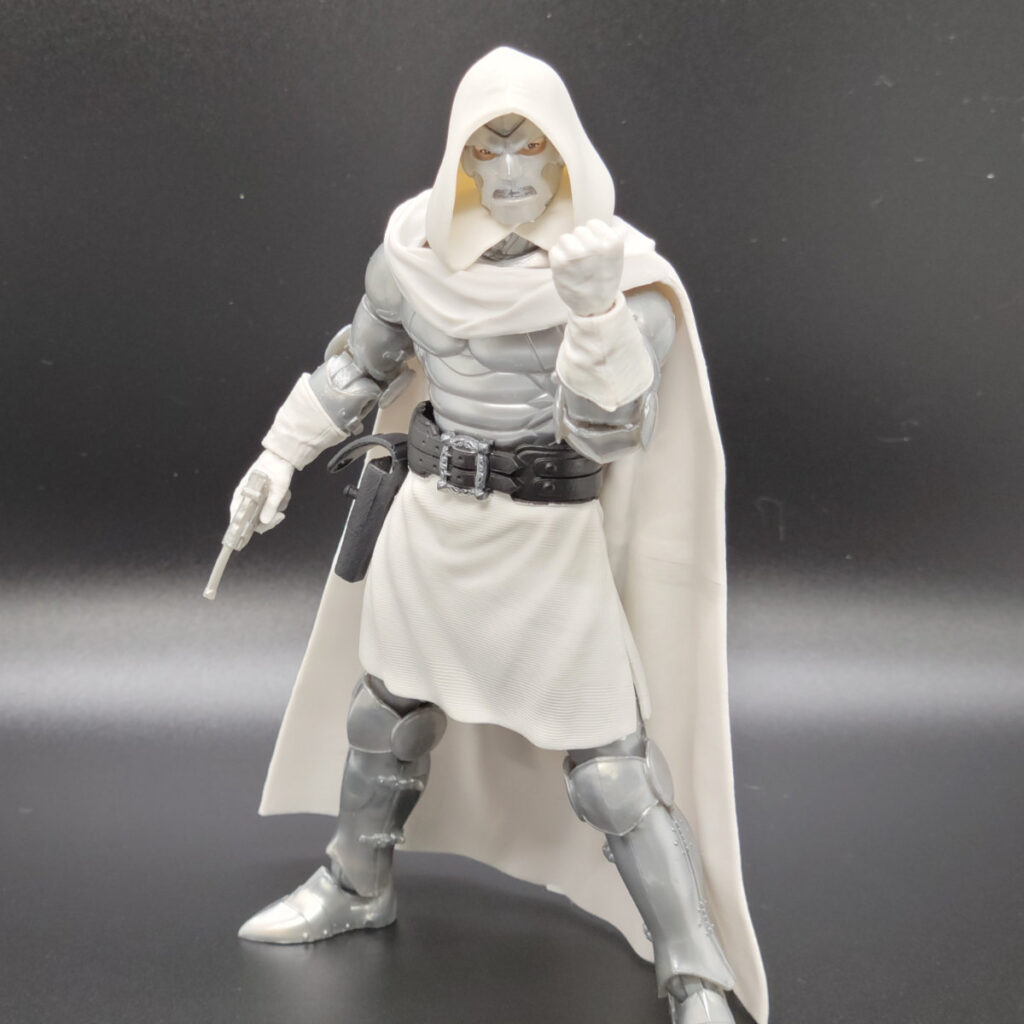 As previously mentioned, this particular wave carries the parts for the Xenmu Build A Figure.

Marvel Legends Dr. Doom, though, is the only figure without a BAF piece.

Instead, he comes with multiple hands, a removable gun in his holster, and a skull/spine accessory which would make any Predator proud.

I’m honestly surprised at the fact that this limited number of accessories pleases me.

He has two splayed open hands, one grasping hand to hold the spine, one pistol holding hand, and one fist.

As much as I prefer to see more accessories, for some odd reason, the multiple hands, skull and gun seem to perfectly complement the figure and really anything else would feel like overkill to me.

I don’t know, perhaps some energy effects such as those that came with the retro Doom would have been nice, but I’m, shockingly, ok with what he does have.

The skull and attached spine are disturbingly fascinating.

When Doom is holding them, I imagine he’s gloating over the remains of his longtime mortal enemy Reed Richards.

I’ll discuss the aesthetic features of this accessory shortly, but for now, I’ll wrap up this section by stating that I’m actually ok with what came with Doom and don’t really see a need for anything else.

I’ll give him the first A.

Other versions of Doom 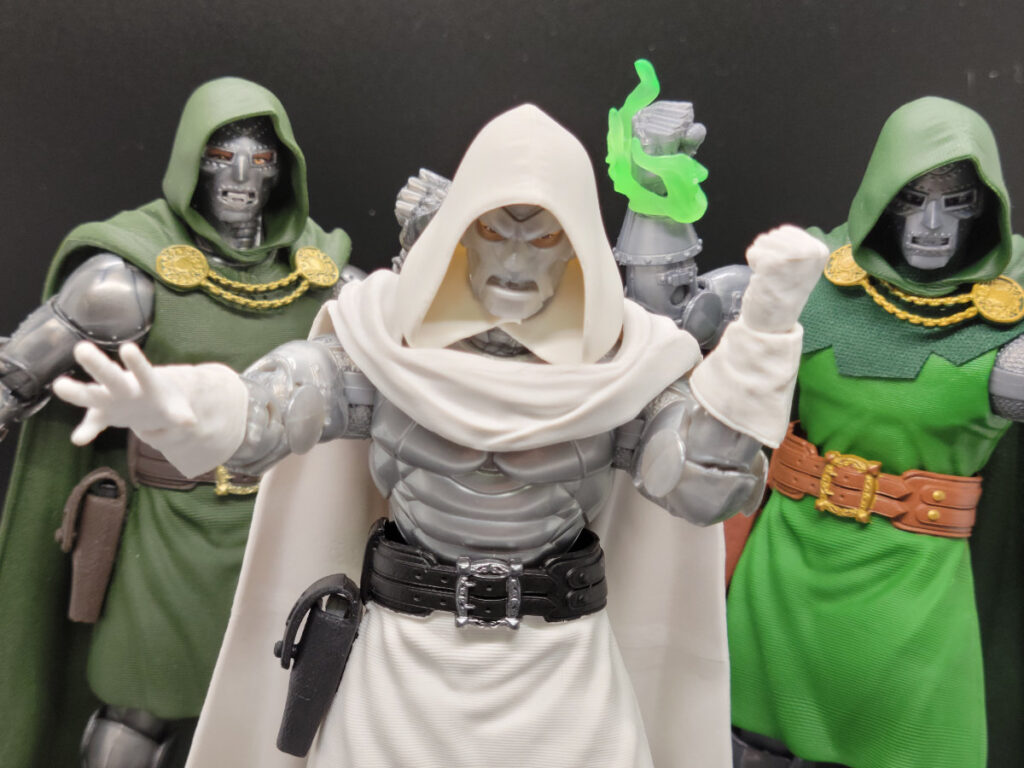 As far as the Marvel Legends Super Villain Dr. Doom figure looks, I dig it.

I didn’t read this storyline and so was initially surprised to see Doom in white.

The more I’ve examined this figure though, the more I really like the design and subtle changes, along with the more obvious white accoutrements.

Previous iterations of Doom have always had a tunic covering his upper body armor, along with his hooded cloak, belt and waist skirts.

This figure lacks the upper body tunic which allows us to get a very nice look at his armor.

The arms and legs of this figure have shown up on previous Doom releases but are in a lighter silver.

I’m very impressed with the sculpted details on the armor, from the buckles fastening the plates together to the finely sculpted chainmail under armor, visible at his joints.

Ever the masters of attention to detail, Hasbro’s sculptors once again give us some amazing things to look at. 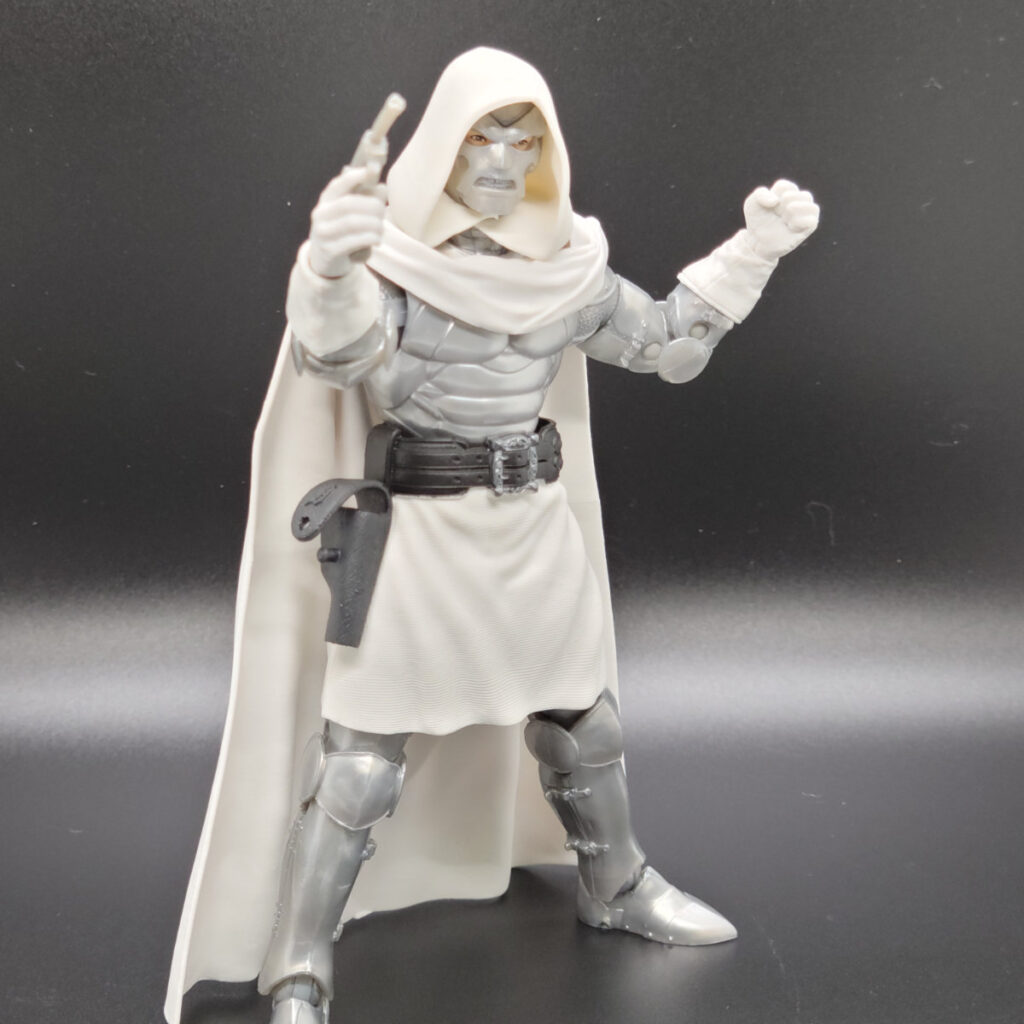 The rivets on his shoulder pieces and on the boots stand out subtly, but are definitely eye-catching.

For me, though, the truly sinister and best feature is clearly Doom’s mask.

Though his features are obscured by his easily recognizable armored mask, the cold malevolence in the eyes is enough to give one pause.

I never thought that a piece of sculpted plastic could convey as much evil as this one does.

Additionally, the paint applications on the face mask are superb and very painstakingly applied.

The hood is separate from the cape, as we’ve seen before, and is part of his head.

Thankfully the cape, hood, and skirt are all made from the same material so there is no difference in the white.

The gloves are also a very bright white and each hand matches the figure very well.

His belt and holster are familiar sights, but featured in black and silver, rather than his traditional brown and gold.

The gun is a re-use and is in silver to match his armor.

There’s nothing really spectacular about the weapon, but it does look nice holstered or in hand.

The piece I have to admit to liking the most though is the skull/spine.

I am impressed with how actually bone-like it appears.

The sculpting allows for some eerie shading effects, but I will admit that this piece could definitely benefit from a black or brown wash to give it depth.

That being said, it’s chilling in appearance and somehow seems very appropriate, clutched in Doom’s grasp.

Stark in simplicity, this Doom certainly earns full approval in its appearance.

I will happily add the second A in the trifecta to this figure. 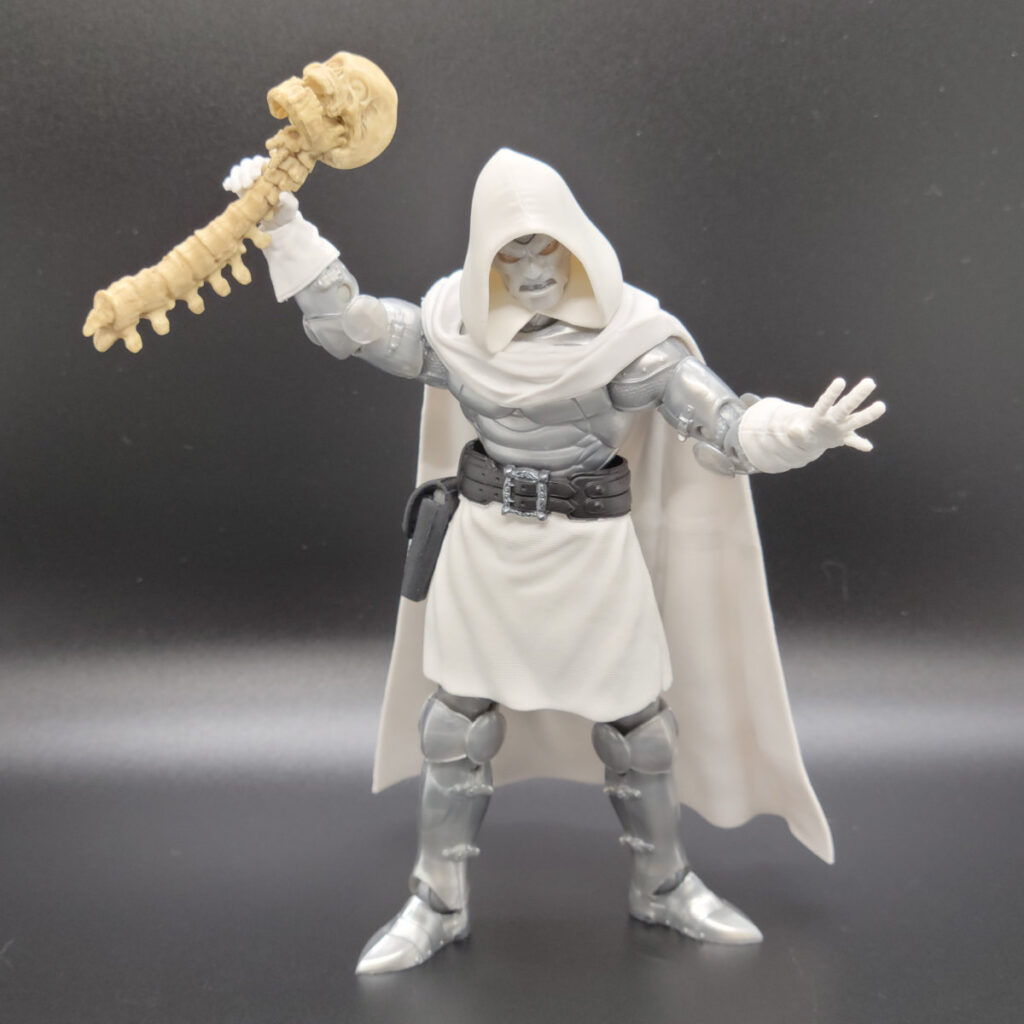 Unfortunately, the biggest disappointment for me with this figure lies in the articulation.

His design alone is enough to limit his mobility.

Doom’s head will easily turn side to side, though you have to lift the hood a bit to get it over the cloak.

He won’t look up far at all but, oddly, can actually look down decently enough.

Doom’s shoulders will make a decent “T” pose and though they can rotate 360, the cape does provide some hindrance.

His elbows are double jointed and will bend in well enough and his upper bicep cut will rotate easily.

All of his hands turn and can hinge, but to me the hinge motion feels and seems somewhat limited.

Doom has, I’m assuming, a limited ball joint at his lower diaphragm.

There is no upper diaphragm moment, but his waist can pivot, tilt, and crunch to a degree. 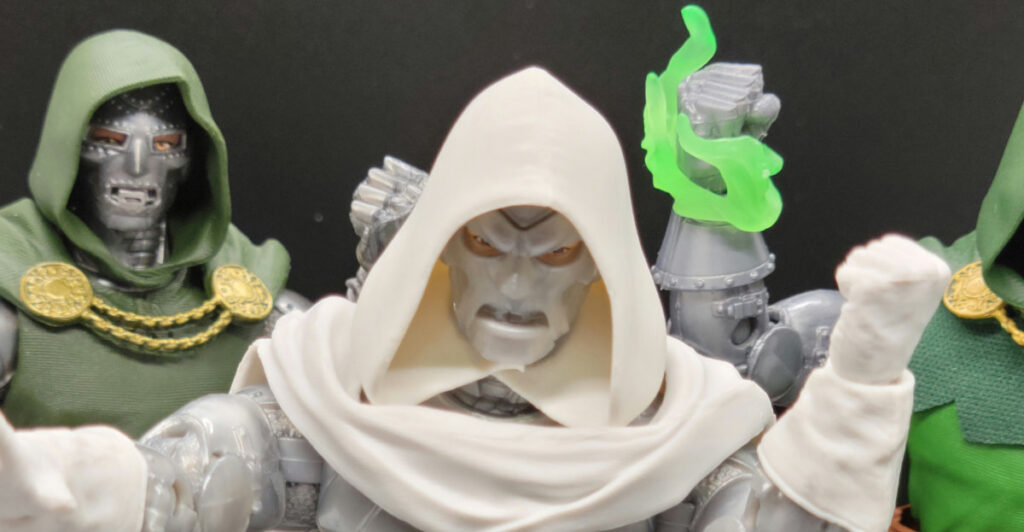 The waist cut is hidden nicely though by his belt.

The most frustrating aspect of this figure though is easily his legs.

The skirts are supposed to be fairly pliable (they were on both my previous Doom figures) which should allow for leg movement.

Sadly, mine is not.

The slits on the side of the skirt will allow Marvel Legends Dr. Doom a limited amount of splits, but trying to kick his leg forward is often met with the skirt pushing it back down.

He does have a decent upper though swivel, both knees bend very nicely, and even with the armored design of the feet, his ankles with hinge fairly nicely and feature limited pivot.

The relative lack of dynamic posing opportunities pretty much relegated Doom to standing on your display with his fist raised menacingly… and that’s about it.

I’m disappointed simply because the figure is a relatively striking addition to my display and I’d have liked to give him some more menacing poses, but alas, we cannot always get what we want.

Sorry, Doom, no coveted Triple A for you today. 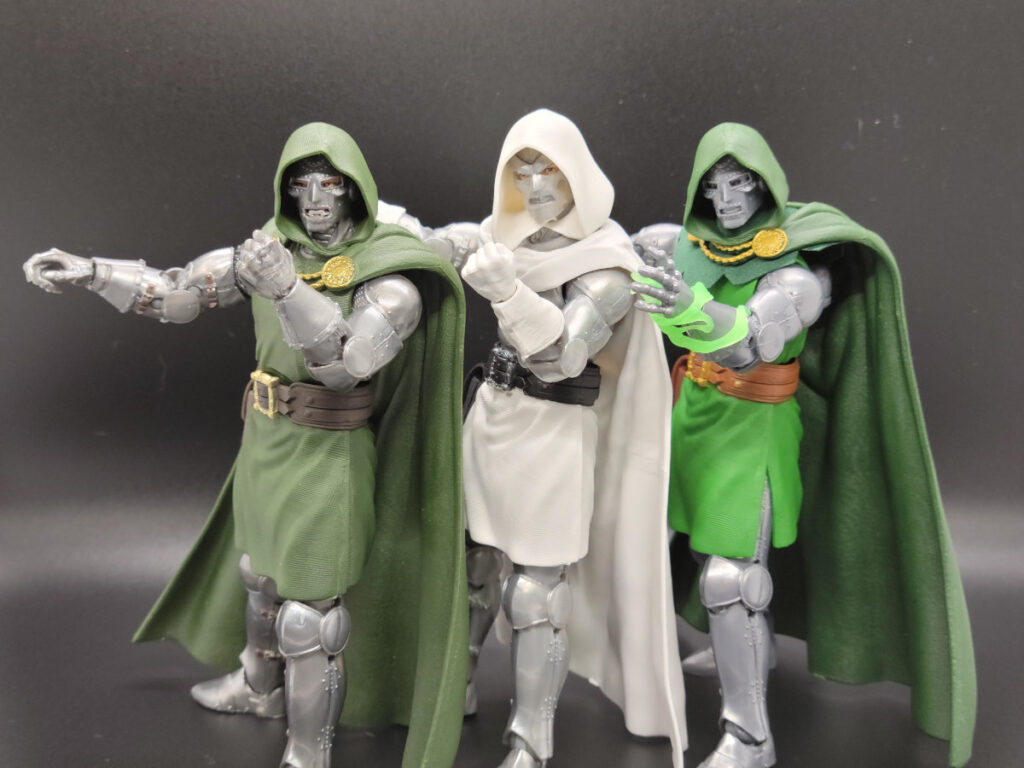 Insofar as Doom goes, there is a lot to like about this figure and almost as much to be disappointed with.

I found him for around $23 in the wild, though I did get companion figures in the wave for the traditional $20 each elsewhere.

Is he worth the price?

The limited articulation though unfortunately drops Marvel Legends Dr. Doom to an average 3 toyboxes out of 5. 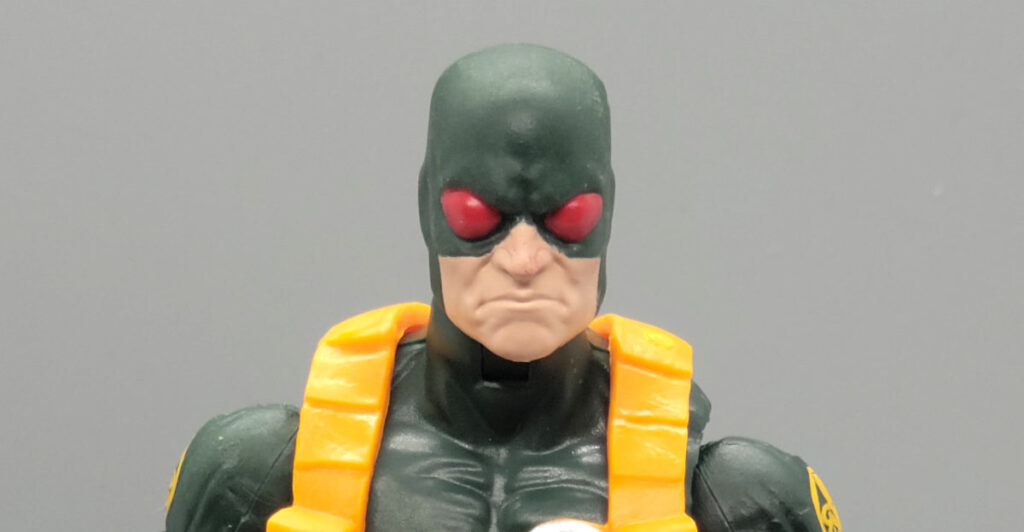