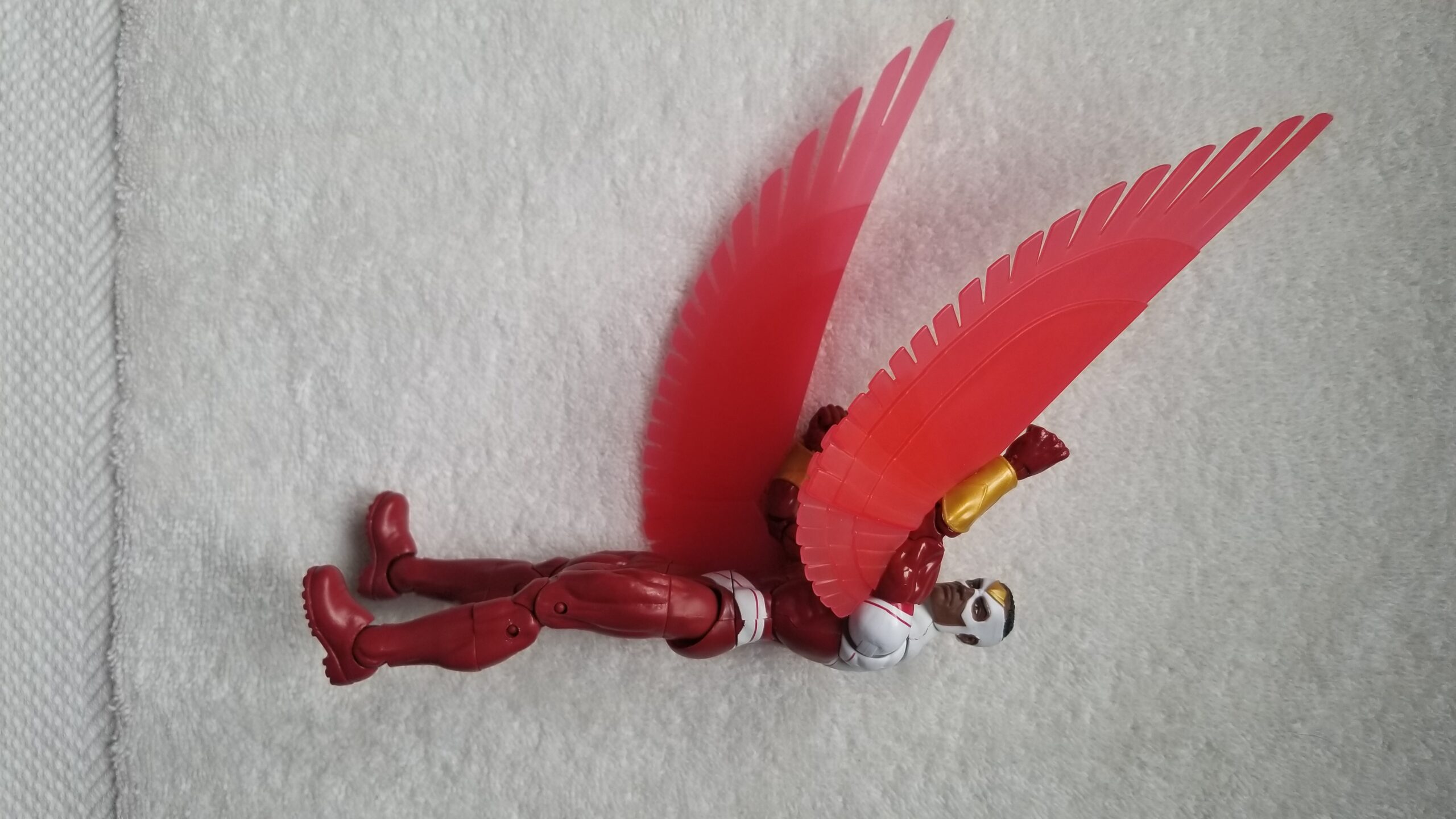 Welcome back to Dan’s Toybox as we continue looking at the “Joe Fixit” Build A Figure wave of Marvel Legends, released in late 2020. Today we’re reviewing Captain America’s long-time associate, Sam Wilson. A.K.A. The Falcon. This version is sporting the 2004 uniform, featuring the hard light/hologram wings developed by Black Panther after his original harness was destroyed.

Sam Wilson has a long and convoluted history in the Marvel Universe. To shorten the story, he met Steve Rogers while organizing the natives of the Exile’s island to fight for their freedom. Rogers befriended him and convinced him to adopt an identity to help inspire the natives in their rebellion. The pair come up with the Falcon persona and spend time training with one another before attacking the Exiles and defeating both them and the Red Skull, who was behind Sam’s presence on the island to begin with. After this, Falcon becomes Cap’s partner in crime fighting and eventually takes on the costume and shield in place of Steve Rogers. Over the years, Wilson has served as an Avenger, and agent of S.H.I.E.L.D. and multiple times as Captain America.

Falcon comes with two pairs of hands, fisted and flight hands (similar to those with the Namor figures.) The wing attachments are painted with a translucent red, to give the hologram/hard light look upon which they are based. We’ve seen these wings before on the Vulture figure and they’re just as nice on this figure as they are on that one. Falcon also comes with the BAF left leg piece.

Falcon is a really nice looking figure, upon initial inspection. This was the figure I was really looking forward to, when the wave was released. When I first heard they were making a Falcon Marvel Legend, I was hoping to get the classic red and white costume, but after seeing which version they went with, I will confess that I was pleased. Now… that being said… there are some good things with this figure, some not so good things, and some bad things. 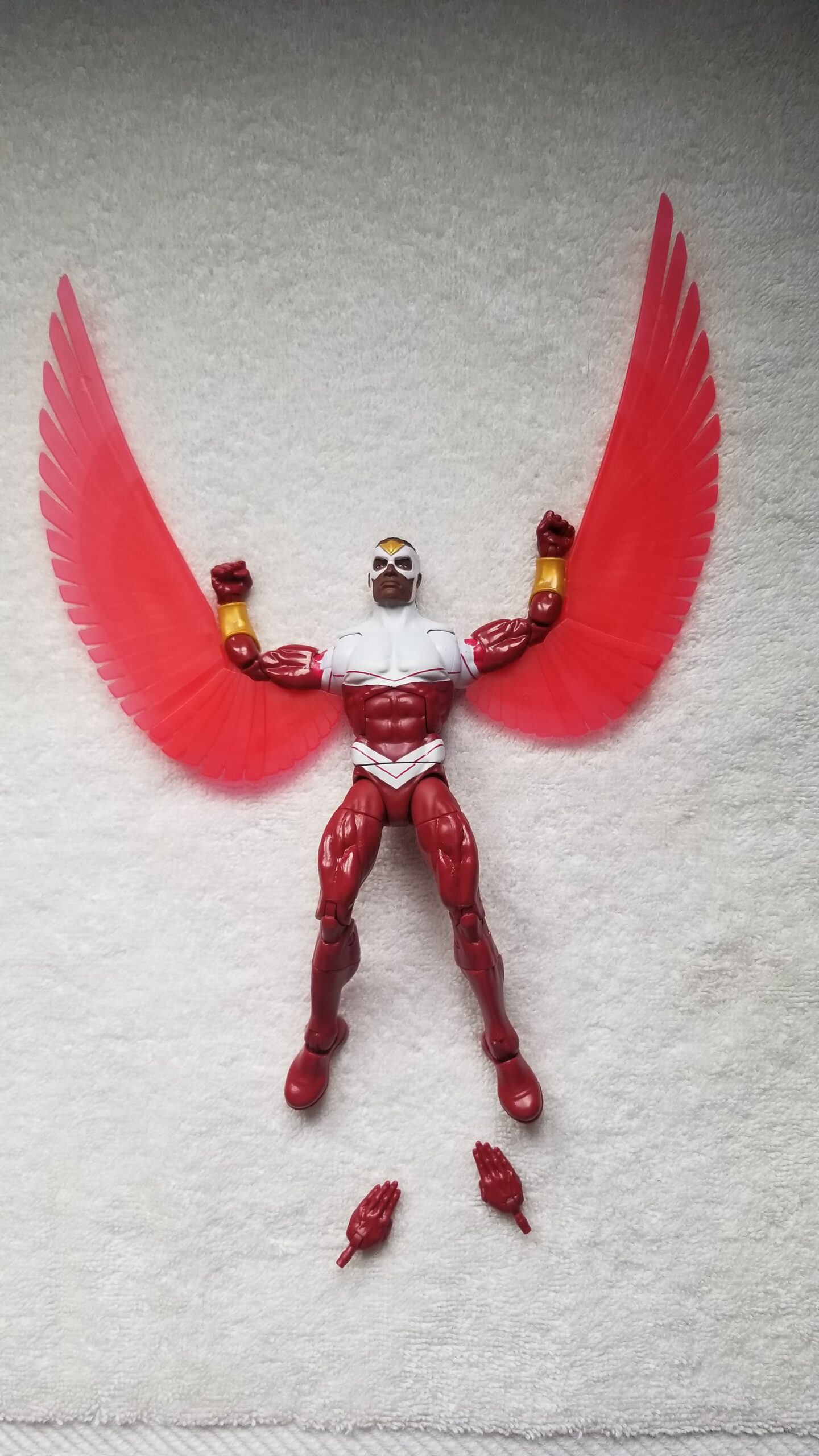 First and foremost, the body sculpt is perfect for this figure. The musculature and physique is fitting and reminiscent of Sam Wilson. We’ve seen this body mold on the Silver Surfer Walgreen’s exclusive figure and it doesn’t disappoint on the Falcon. The head sculpt and face really look nice with very cleanly applied paint schemes. The red/white color scheme with gold highlights on the mask and gold bracers on his wrists really pop. Unfortunately the red and white paint has some serious problems, though.

The biggest problem is at the shoulder/butterfly joints which are molded in white, with a bright appearance that really pops. The red paint on the shoulders is brilliant and looks nicely done, painted over the white. Sadly… this doesn’t match the rest of the body. The arms, legs, and torso are molded in red, with white paint applications. The red is very dark, much darker than the red on the shoulders and the white needs multiple coats as it is also a mismatch for the white on his shoulders and head sculpt. I was very disappointed with this glaring inconsistency. It’s sad because the deep, rich red of the figure looks so good, but then the lighter red hints on the shoulders look so out of place. This is honestly my biggest gripe with the figure. The translucent red wings, though, look really sharp when attached to the figure and manage to convey the illusion of both speed and power regardless of the pose. Swapping out the hands, as with Jocasta is problematic as the ports are very tight, but unlike the Vulture, these wings snap into their slots firmly and stay in place very well.

Articulation on the Falcon is standard for Marvel Legends. Unfortunately, Falcon suffers from similar issues as the other figures in this wave. He has stiff shoulder joints which needed loosened up. Thankfully they didn’t chew or scuff as with Jocasta, but it took a while to get them moving freely. Conversely, his elbows on both arms were very loose. I haven’t yet fixed that issue, but will work on it sooner or later. Anyhow, his head turns and looks up and down with ease. He has butterfly joints at the shoulders, which gives a much nicer range of motion for flight displays. The arms rotate 360 and elevate out to the sides at 90 degrees. He has a bicep swivel, elbows that bend in very far, but not quite 90 degrees and pinless joints. His diaphragm joint allows for forward and backward bending, but no side to side tilt/pivot. He’s got a waist swivel, hips that allow for better than 90 degree splits, double jointed knees which bend nearly heel to butt and ankles that pivot, and hinge up and down. The articulation lends to some beautiful flight poses for this figure and will allow some great photography opportunities. 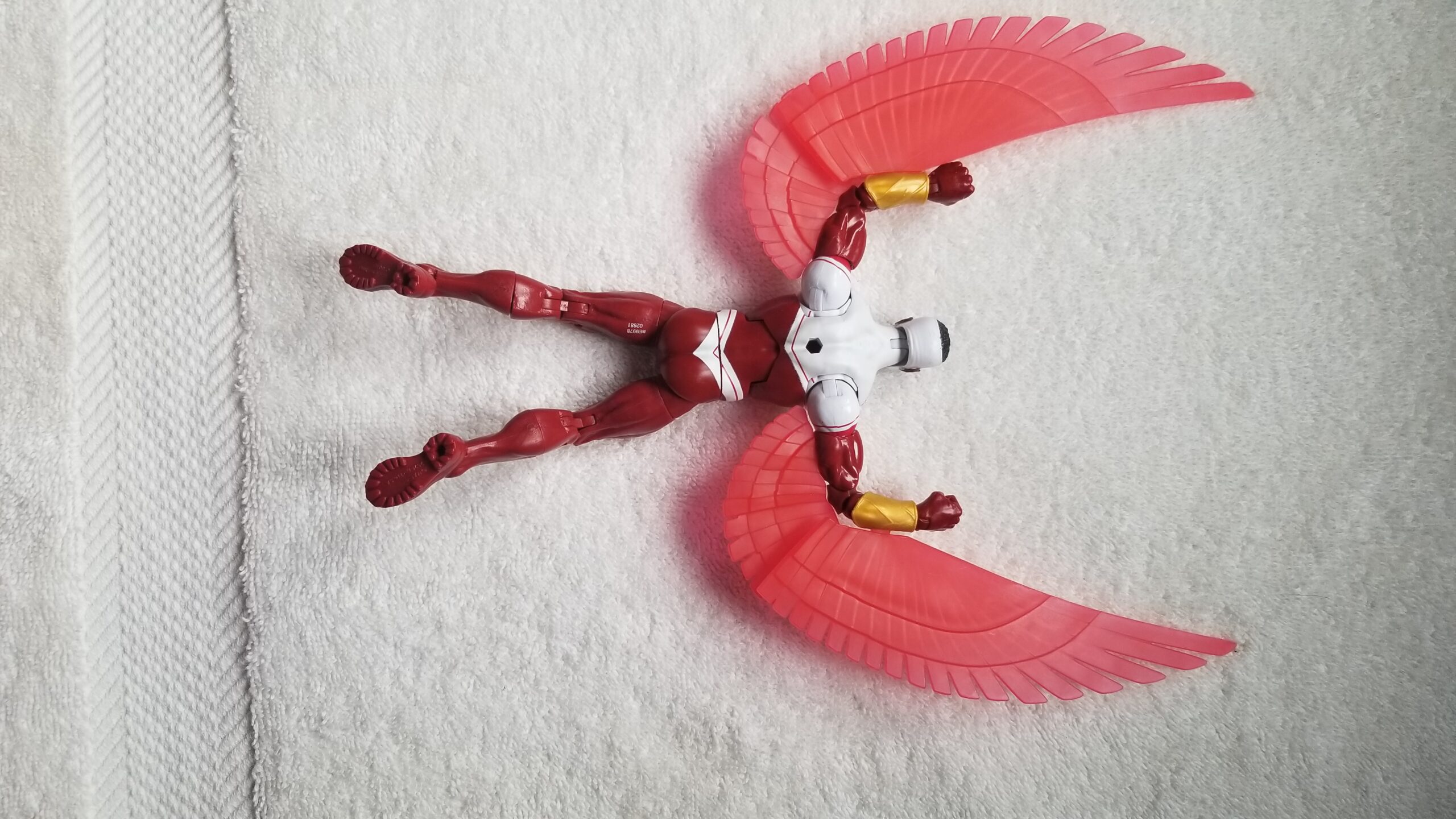 This was the figure from this wave that I was really looking forward to the most. I’ve always been a fan of the character and really wished this had been his classic red and white costume, but I’m not going to look a gift horse in the mouth. The more I look at it, in spite of the color differences in the red and white, the more I do like him. That being said, if you can find one in the wild, you’ll pay the typical retail of about $20, if you look on the secondary market, he’s a bit higher. I like this figure, but because of the paint inconsistency and the joint issues, Falcon only gets a 3 out of 5 Toybox rating. Thanks for hanging out and be sure to check back for our next review in a couple of days! Until then… GEEK OUT!!!