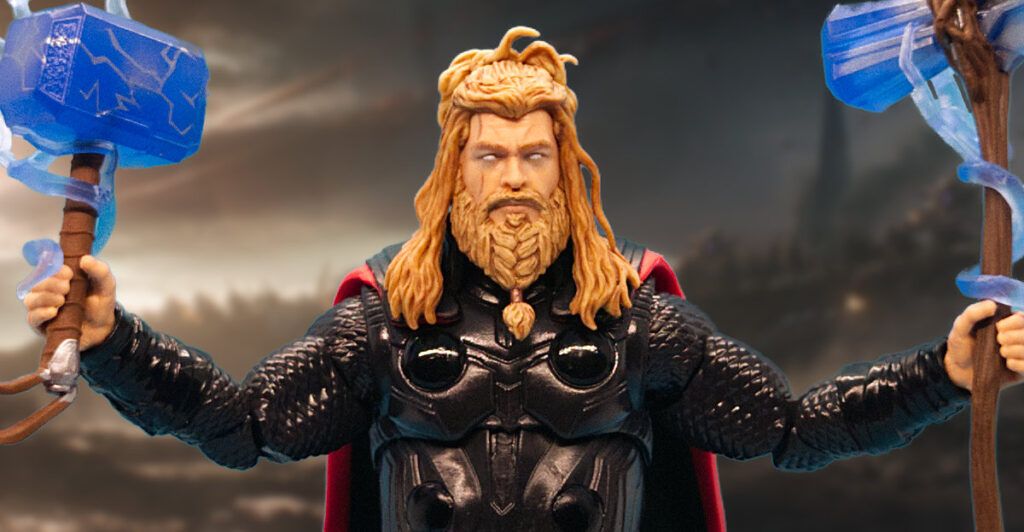 The Hasbro Infinity Saga Marvel Legends line just keeps on producing! This offering, the Endgame Final Battle Thor, is no exception either.

I’ve been waiting on this figure for quite a while and finally landed one for myself.

I’m really impressed with the new Infinity Saga packaging that Hasbro has developed for their MCU figures as well.

Overall, I’m really digging the direction they are going and hope they keep it up! 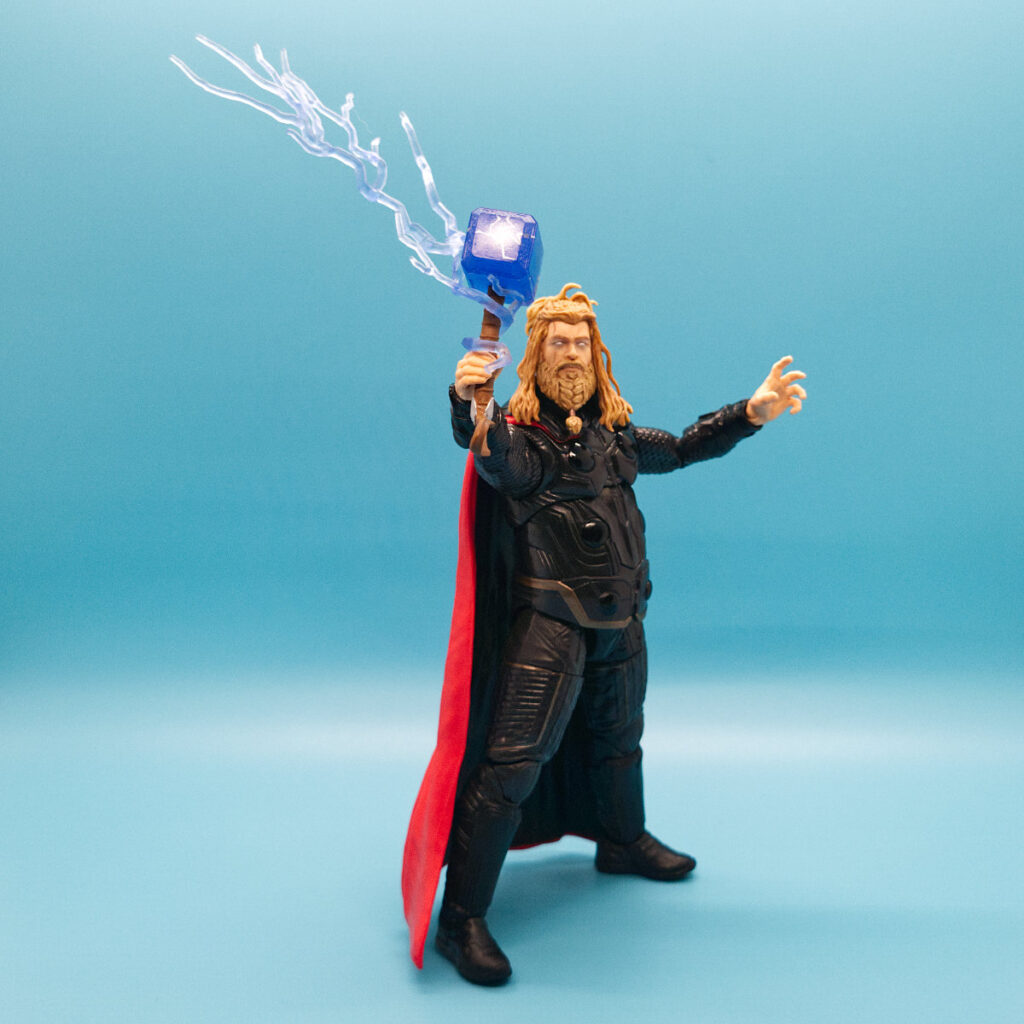 It’s been five years since “the Blip.”

The remaining Avengers are doing the best they can to put their lives together after suffering such a massive defeat.

The God of Thunder, though, has been struck the hardest by his failure and has all but given up.

The lack of physical exertion, coupled with his self-defeated attitude has definitely left its mark on the Thunder God.

When the Avengers come up with a daring plan to correct Thanos’ evil actions,

Upon seeing his mother Frigga, alive in the past, on Asgard Thor realizes he is still worthy to wield the power of Mjolnir.

Armed with both Stormbreaker and Mjolnir, Thor’s resolve is put to the test as yet again, the Avengers prepare to face Thanos with the fate of the universe hanging by a thread. 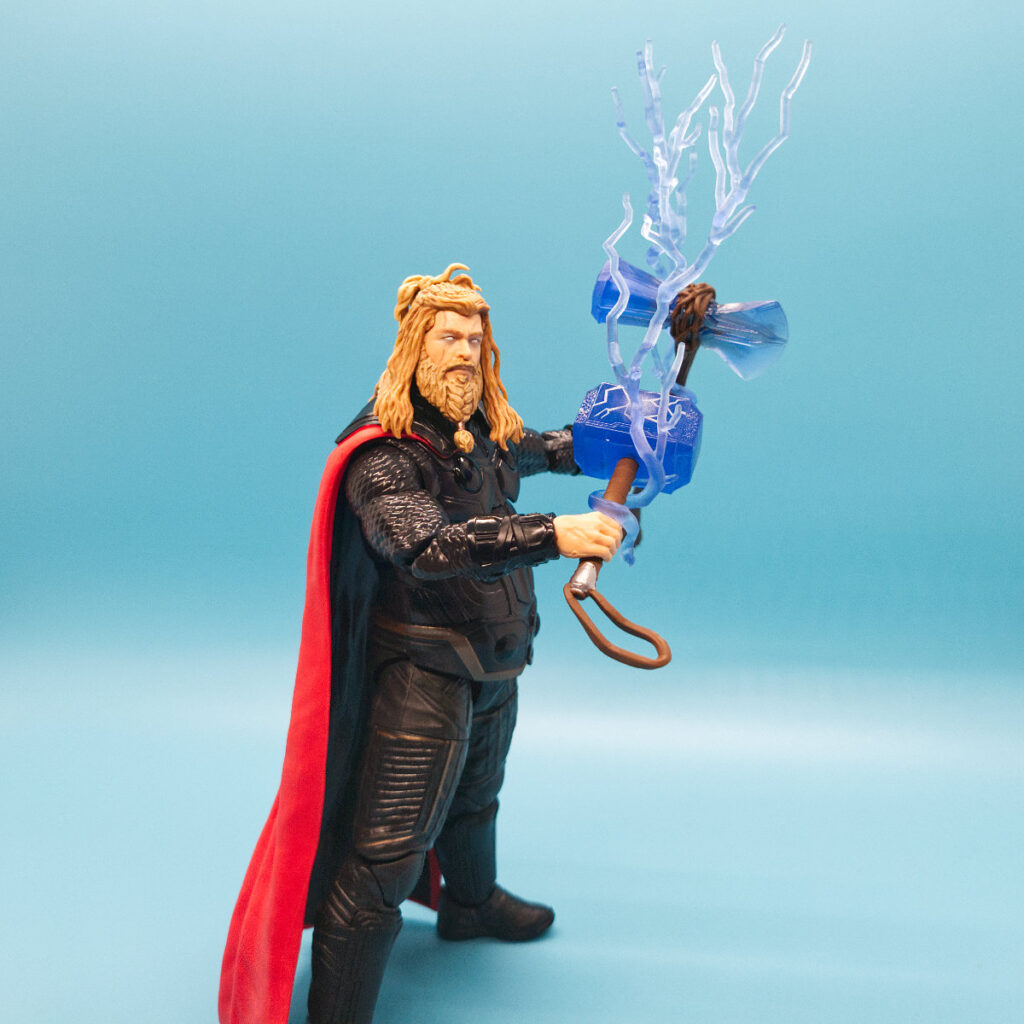 Ok, there’s no getting around it… “bro Thor” may be gone, but he’s still a bit, erm… out of shape.

That being said, this armored version is one sweet action figure!

How does he stack up with our Triple A review?

He’s got stuff, he looks good and he moves well. I’m thinking we’re already starting to get somewhere!

The Asgardian comes complete with two pairs of hands, one open pair, one gripping pair.

He also comes with two lightning effects, which we’ve seen before but still look incredible.

Lastly, he comes with BOTH Stormbreaker and Mjolnir and what I really like about the pair of weapons is the effect painting on the “business ends” of each.

I’ll get into those shortly, but needless to say, they really are excellent.

There may not be a lot packed with Thor, but what is, is exceptional.

In this case, I can definitely say that quality exceeds quantity, which means Thor definitely gets an A for Accessories. 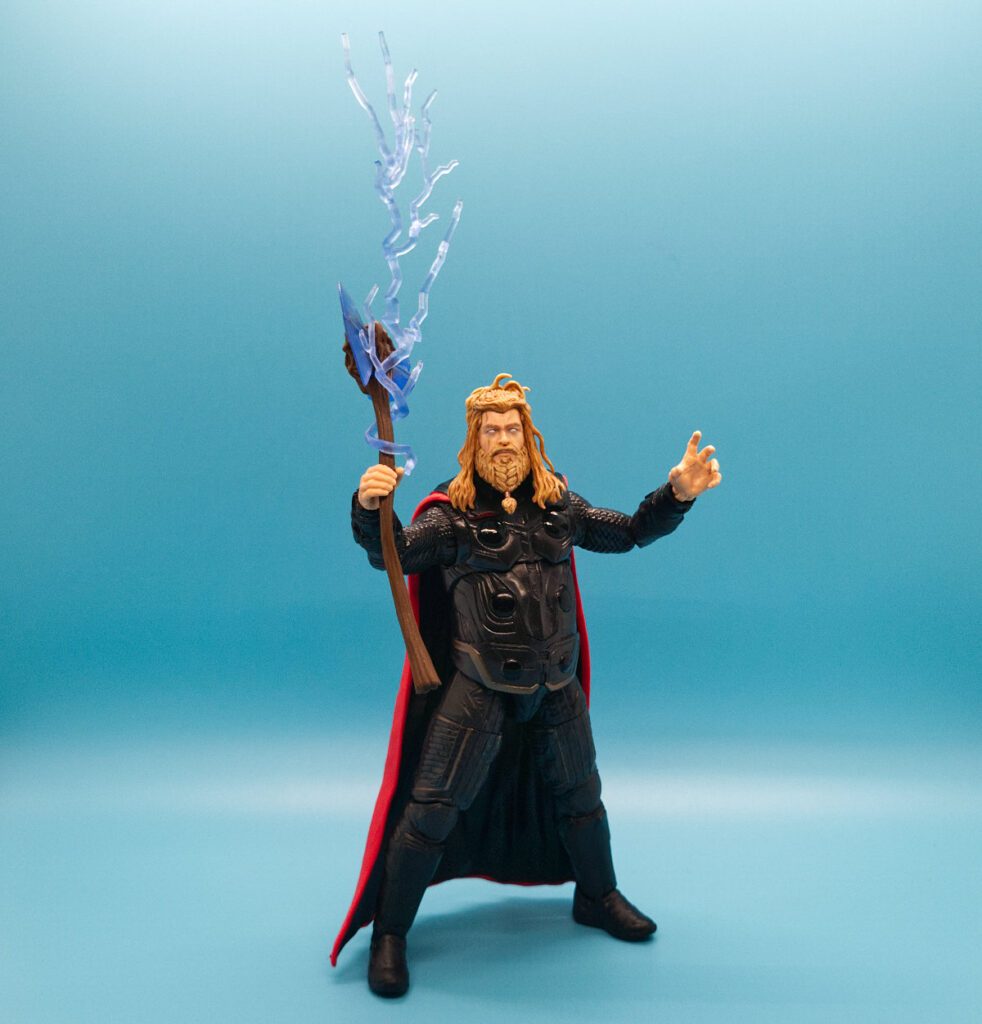 As Billy Crystal used to say in his “Fernando” character on Saturday Night Live…”You look Mahvelous… and it is better to look good, than to feel good.”

I will say, right out of the gate, Thor looks “Mahvelous.”

There have been some Marvel Legends that look amazing and some that just miss the mark.

In this instance though, Hasbro really nailed the look.

Starting at the top, Thor’s head sculpt is immaculate.

The hair sculpt, featuring his top knot and braided beard  not only conveys depth but has a wash to give the hair substance and shadow.

I am very pleased with the amount of detail put into making this as accurate a representation as possible.

The facial features, based on their photo real tech just scream “Chris Hemsworth” right down to the scarring around his right eye.

My favorite detail here is the paint application to his eyes.

The electrical glow emanating from them shows the barely contained power seething within.

I really like what they’ve done with this head sculpt and as nice as it is, the rest of the figure is even better.

His cape is sculpted beautifully and the folds and wrinkles give it a sense of motion.

The red paint is deep and looks brilliant against the black underside of the cape as well as the rest of the costume.

I would love to see Hasbro work with soft goods at some point, but until then, I’m very happy with the look of what they are currently doing. 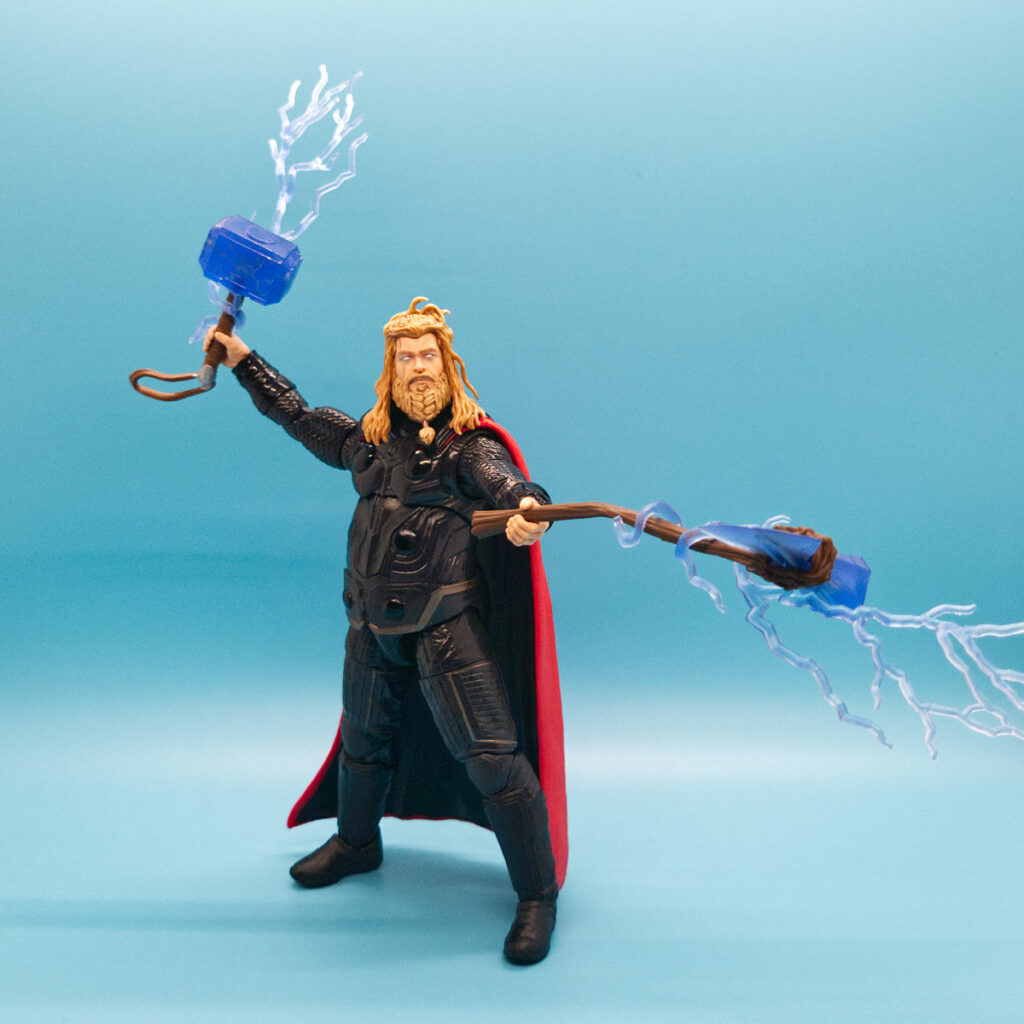 Thor’s armor is very intricately detailed and features a mix of deep glossy black and a more subdued matte black.

What is exceptionally intriguing though is the coppery colored trim around his waist and on the pant legs.

At first it’s not immediately eye-catching, but once you notice it, you cannot help but see it thereafter.

The amount of sculpting and detail in the figure is incredible as well.

The chainmail sleeve links are individually sculpted and don’t run together or “blur” to obscure details.

The trim on his pants, wrinkles, and detail on his boots add to the overall excellence of the figure.

Even his gloss black wrist bracers are detailed and look like they could be removed.

For the minimal amount of color detail on this figure, it is certainly very well done and needs nothing else.

Looking at both Stormbreaker and Mjolnir, the handles are both molded in the same shade of brown, which is much lighter than previous iterations of both weapons.

Honestly, the handles are the only pieces that I don’t like, as they tend to look a bit “cartoony” for me.

If they were given a dark wash or painted like other issues, I’d be much more impressed.

However, both have a very redeeming quality… the weapon heads are molded in this beautiful translucent electric blue, with silver lightning effects painted across each.

Mjolnir also comes with a silver painted base to the handle, on which the leather wrist strap is attached.

I love the fact that Hasbro elected to give the weapons a “powered up” look and when coupled with the gorgeous translucent blue lightning effects really jump out from the figure.

I’m really digging the fact that this figure looks so accurate and does so many things right!

Endgame Thor immediately earns an A for Appearance! 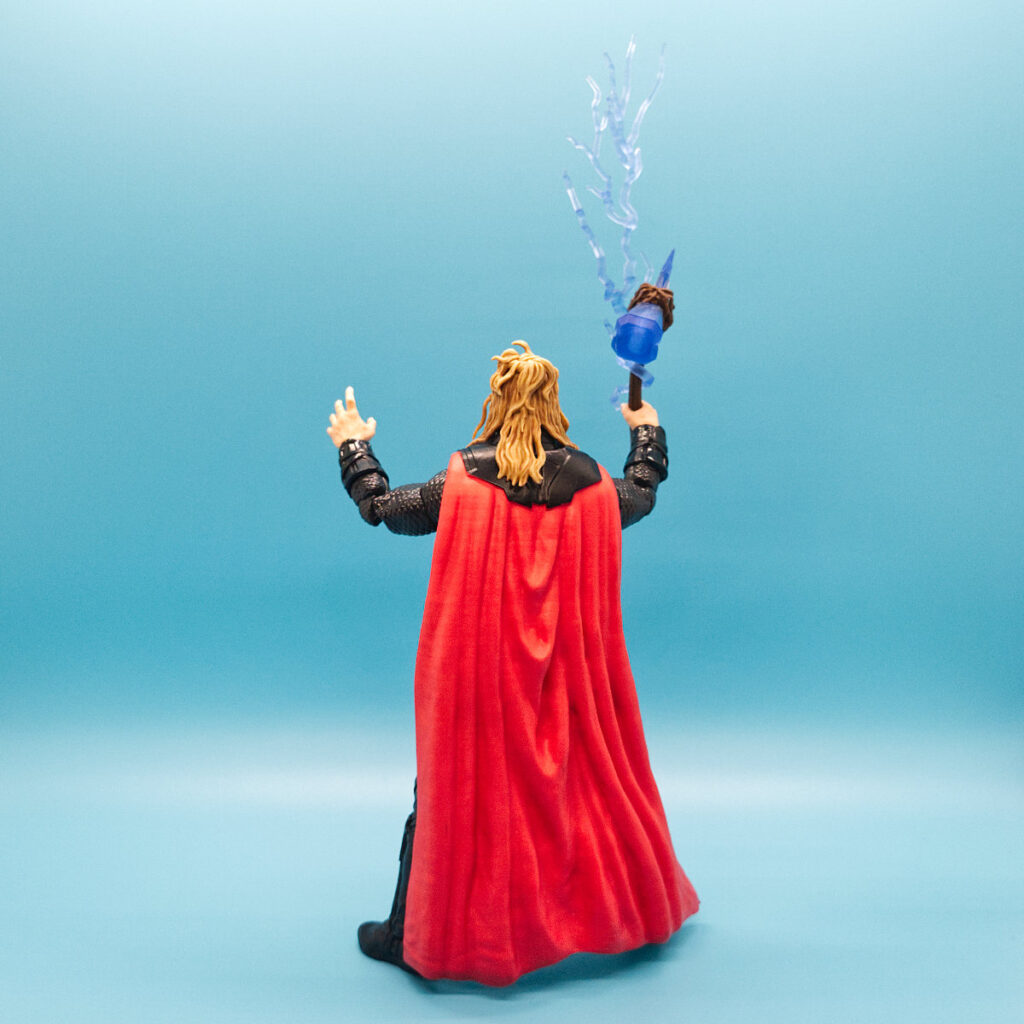 The final question to be answered is how well he moves.

Again, starting at the top… Thor’s head turns left and right very easily and, thanks to the pliability of his hair, he can look up a little bit and down almost as much.

The hair does limit the up/down movement but not as horribly as I’ve seen on other figures.

The shoulders raise out to a very high “T” pose and can rotate a full 360, even with the cape behind them.

Unfortunately the forearm portion on mine was very tight and needed heated before I could get it to bend in fully.

The wrists on the gripping hands turn and hinge  on the lateral side of the hands, giving him a “dice throwing” motion, useful for swinging both Mjolnir and Stormbreaker.

The open hands also pivot and hinge up and down as with other Marvel Legend figures.

Thor has an upper torso joint that tilts side to side, can lean forward and back and can rotate, but is limited due to his sizable midsection.

There is no waist swivel though, but his leg articulation is pretty amazing.

Thor can do an amazing split and his legs kick forward very high, but not backward very well.

His upper thigh cut works easily and his double jointed knees will allow for heel to butt bend and both ankles hinge up and down very well, along with the usual great ankle pivot, thanks to the forward facing pin.

Amazingly enough, this figure moves much better than I expected it to, given the nature of the sculpting.

There is really very little lost in mobility on this figure as Hasbro engineered the design very well.

I like it and I’m very happy with it.

Thor sweeps the Triple A and gets the Articulation grade! 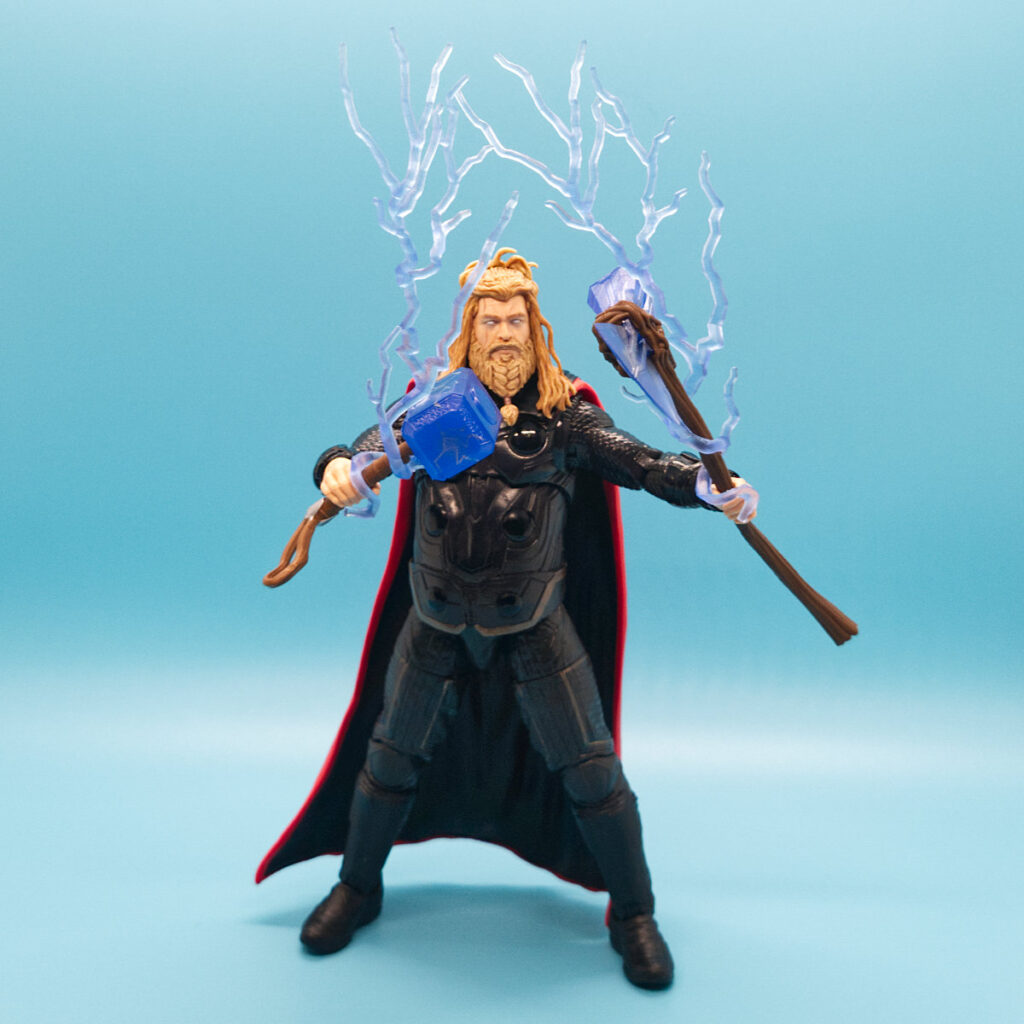 As much as I love the detail associated with the import figures I purchase, this Thor definitely meets my expectations and honestly, makes me feel like I don’t need an import version.

The Hasbro Infinity Saga Endgame Thor is a really well done figure that does not disappoint.

You can find these and many other Marvel Legends figures in retail stores or online at Big Bad Toy Store. 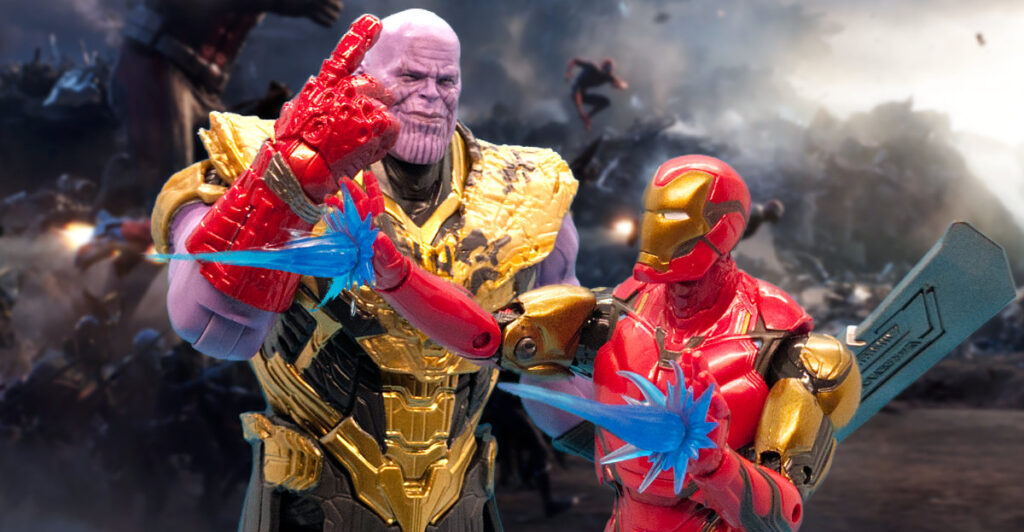