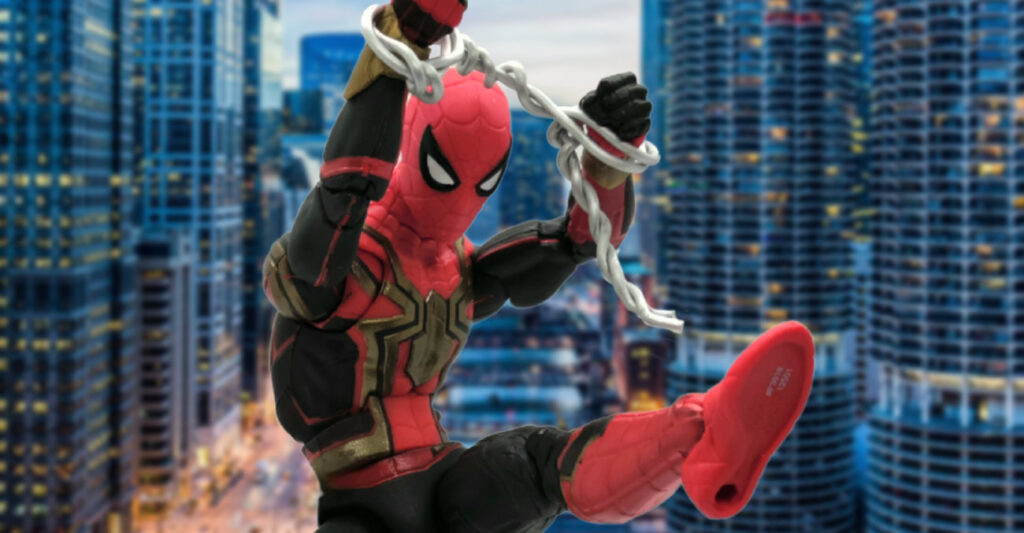 No Way Home! We’re about two months out from the release and Hasbro is already dropping some great figures from the film. I highly suggest getting your hands on this wave before it disappears because these are definitely some sweet figures! Let’s find out if The Integrated Suit Spider-Man is one of them!

After his identity is revealed by Mysterio at the end of Far From Home, Peter Parker must find a way to make the world forget that he is Spider-Man.

Reaching out to the Master of the Mystic Arts, Dr. Stephen Strange, Peter asks the sorcerer for help.

As Dr. Strange begins to cast the spell, Peter’s continued talking and interruptions result in a disruption.

This leads Peter on a brand new adventure, causing him to create amazing new costumes to help combat these new, dire threats.

Be ready, true believers, because Spider-Man: No Way Home swings into theaters this December!

You don’t have to wait two months to learn about the new Integrated Suit Spider-Man figure though… unless you want to. 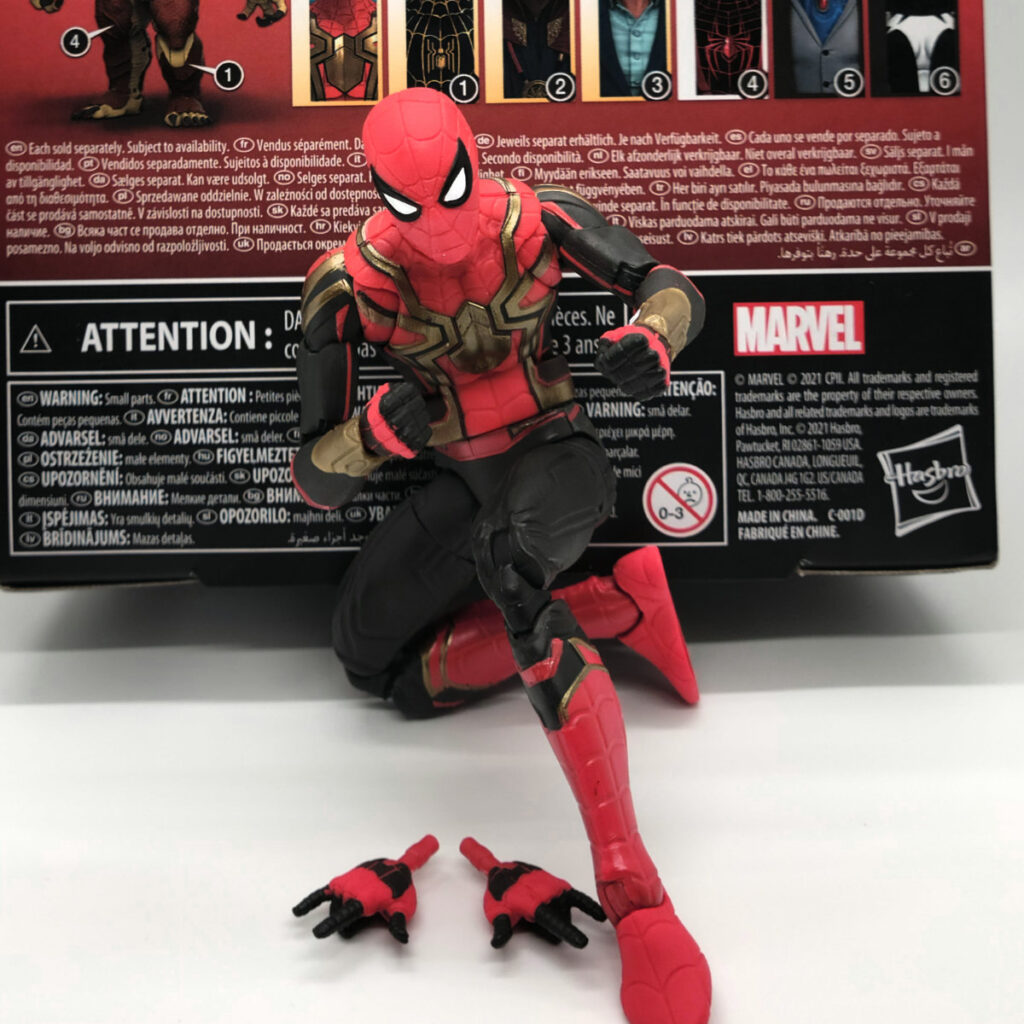 I can say that I’m definitely intrigued by the possibilities presented in the upcoming movie.

This new suit appears to be a crossover design between the Iron Spider Armor from Infinity War and the Upgraded Suit from Far From Home.

Initially, I assumed it was simply a repaint of the Iron Spidey, but upon closer inspection, can see some differences.

How does this figure handle the Triple A of Accessories, Appearance, and Articulation? Time to find out. 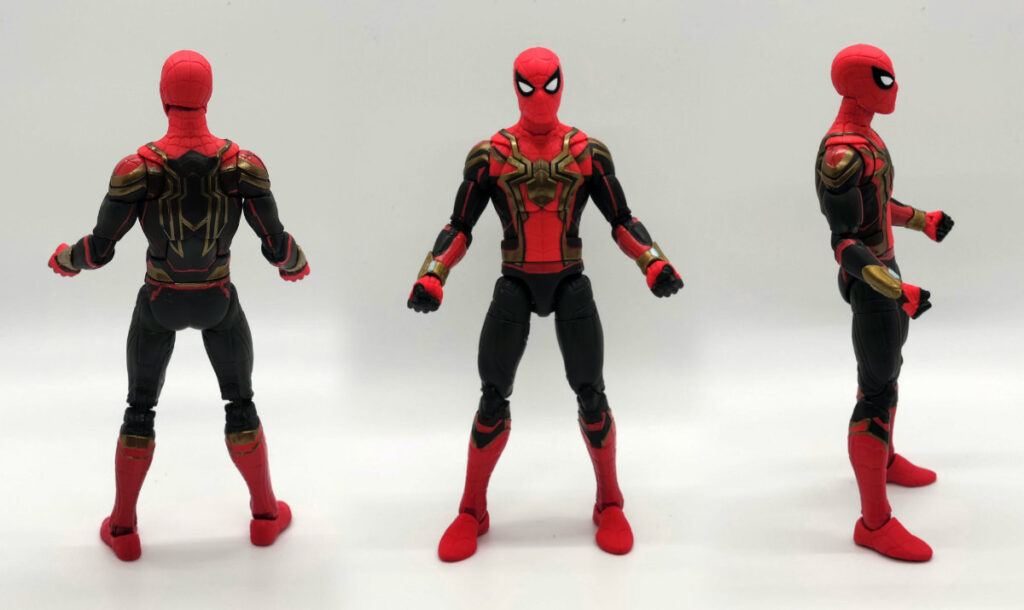 Right out of the gate, I’m disappointed by the lack of accessories.

Integrated Suit Spidey comes with a pair of fisted hands and a pair of thwipping hands. What does Hasbro have against packaging Spider-Man figures with wall crawling hands?

I am flummoxed by this. I get that more accessories makes a figure more expensive, but c’mon, I’ve bought other Spidey figures with three pairs of hands for the same price.

This inconsistency from Hasbro is annoying and really needs to be addressed.

I’m just fed up with the “hit or miss” idea of putting proper accessories with figures.

They didn’t even give this one a webline either.

I guess it’s a good thing that I’ve got a drawer full of webs that I can pose him with.

I would suggest they limit the number of Build A Figures they make and focus on giving us more accessories, but then, they couldn’t gouge us with peg warmers to get the crucial missing piece to complete a much wanted BAF. (Of course, in a year or so, they’ll drop the BAF as a deluxe figure and we’ll end up buying it too.)

Yeah, sorry web-head no A for accessories, maybe a D for disappointment. 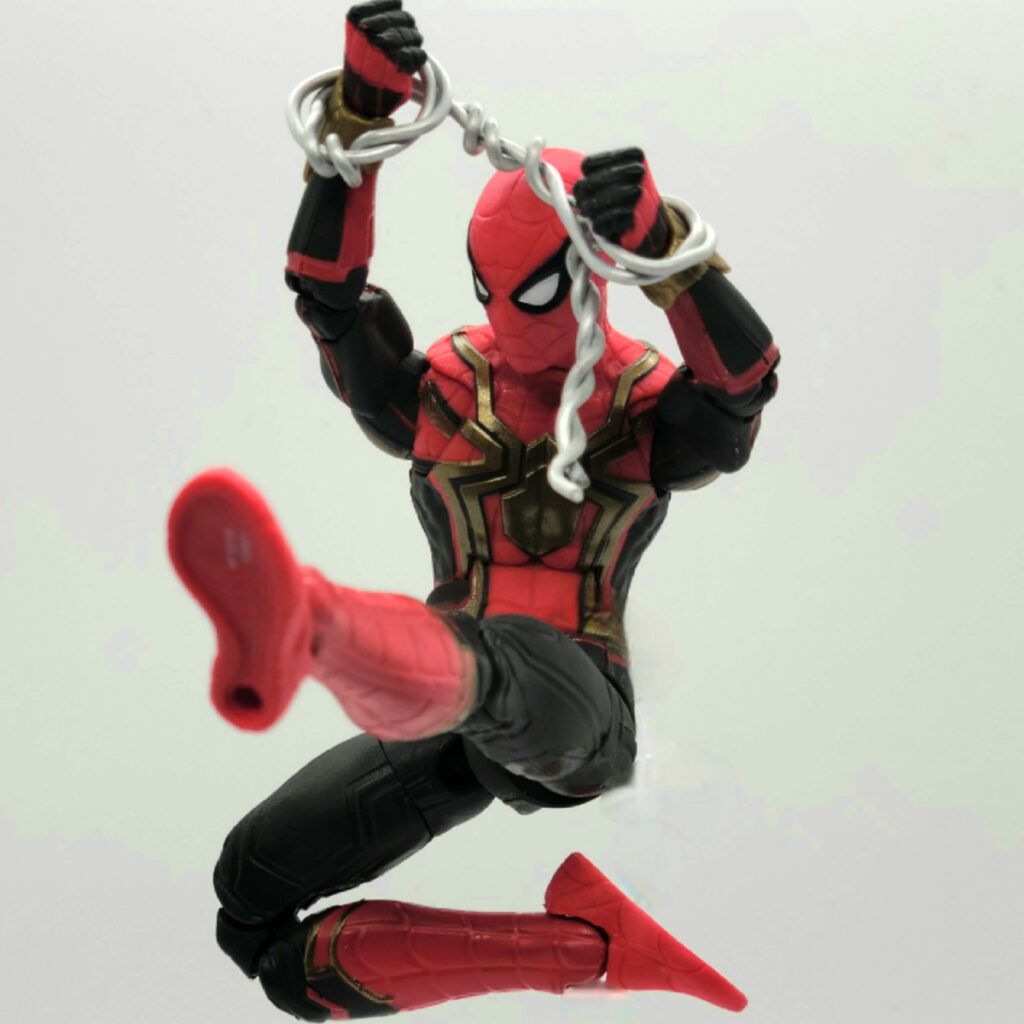 The Integrated Suit Spider-Man can easily be confused, initially, for the Iron Spider armor.

However, upon closer inspection, you will see the differences in coloring, logo design, and suit design.

This is a pretty neat look for the figure and I’m eager to see it on the big screen.

The figure is red, gold, and a charcoal gray and actually pulls the look off quite well.

I very carefully scanned him for paint application issues and really only found a couple of small issues.

The gold trim on his boots is splotchy and missing in some places, but overall, the figure is done very nicely.

Much like previous iterations of Spider-Man though, the webbing on his costume is sculpted on, but not painted in.

Even a black wash over the figure would have helped to give more depth and shadow to the webbing and would have been more accurate to the figure.

It’s frighteningly maddening how detailed Hasbro can be on some figures, yet on others act like…”Meh, this is good enough.”

There are some bright spots for detailed paint apps on this figure, but they are few and far between for me.

Outside of the paint applications, I will admit that the sculpting on the Integrated Suit Spider-Man is top notch.

The texture applied throughout the costume, the lines on the arms and legs, the emblems and the actual webbing are very well done.

You can see elements of just about every spidey costume combined in this figure and it’s a pretty sharp design.

As much as I wasn’t happy with the paint detail, I will admit that the sculpting helps rectify those issues.

That being said, I don’t feel it’s enough to earn an A for appearance. 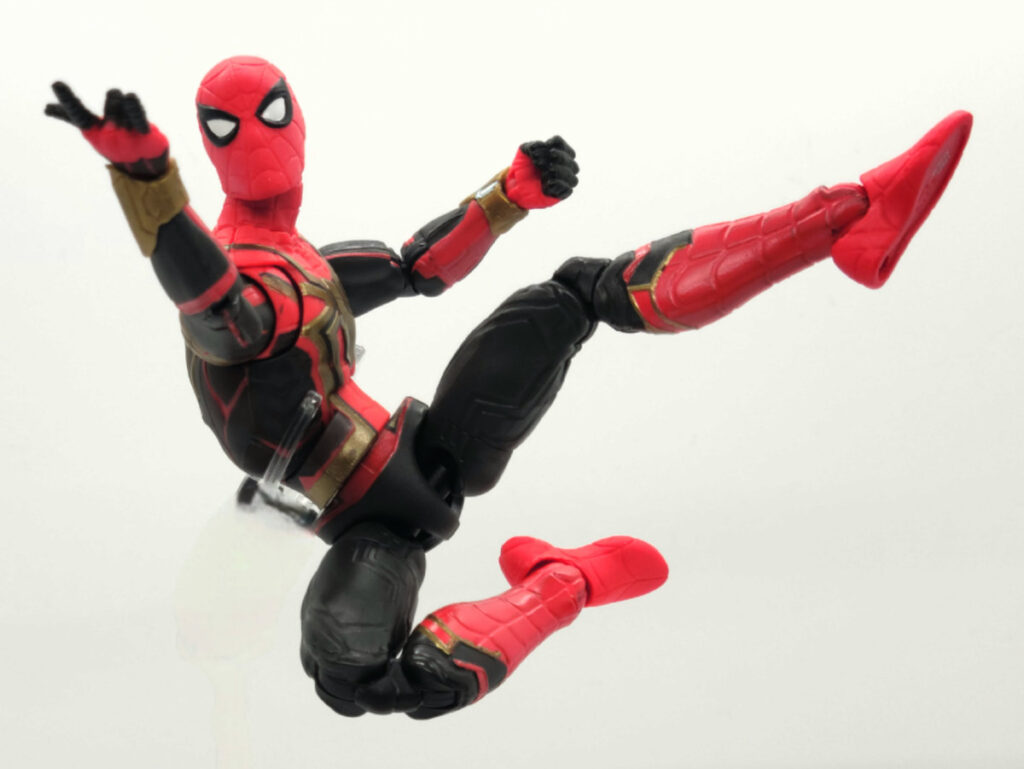 Let’s hope he can salvage some dignity with decent articulation!

His head sits on a ball peg, which gives Spidey great range of motion for looking up and down, side to side, and tilting his head.

Great start, let’s keep it up!

The shoulders are on butterfly joints, which is always a plus on any figure, but especially on Spider-Man.

The shoulders themselves rotate a full 360 degrees and can raise his arms out, at a higher angle than your typical T pose.

I’m feeling pretty good about how he moves, not gonna lie!

Both sets of hand hinge and swivel even with the web shooter sculpt causing some limitation.

Spidey has an ab crunch, which bends both forward and back very deeply, and much to my delight the figure retains his sculpting up and under the diaphragm cut. His waist swivels without difficulty.

Perhaps the most important aspect of Spider-Man’s movement is his flexibility… this figure can DO SPLITS!!

I can’t remember the last Spidey Legend that had that range!

This makes me very happy!

He has an upper thigh cut which lends to easier posing, pinless double jointed knees which allow the web-spinner to touch his lower back with his heel!

There is no boot swivel, but the ankles hinge nicely and have great pivot range as well.

This figure can move and he moves WELL!!! Definite A for Articulation.

Yes, it’s the standard Legend articulation, but for whatever reason, it works exceptionally well on this figure. 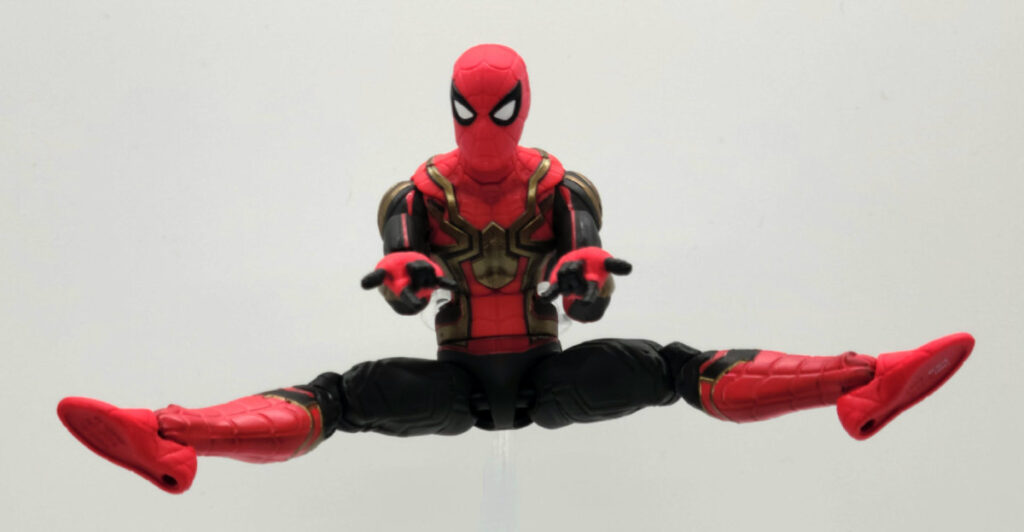 So there you have it. The Integrated Suit Spider-Man only earns a single A from me.

I will admit though, that the A he earns really helps offset the other areas he’s lacking.

Is it enough to push his overall rating higher… not by much, sadly.

At the price point of about $23 (Yeah, Legends are starting to climb in price… go figure.) the lack of accessories and the issues I had with the paint outweigh the great articulation and for me… that means the Integrated Suit Spider-Man earns 2.75 toyboxes out of 5.

He looks decent enough on the shelf, but isn’t one that I would feature. 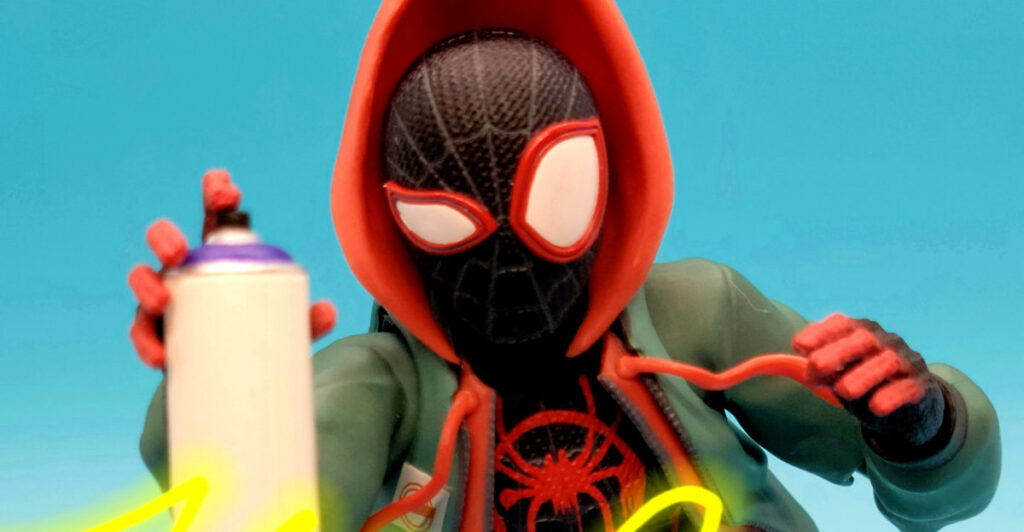