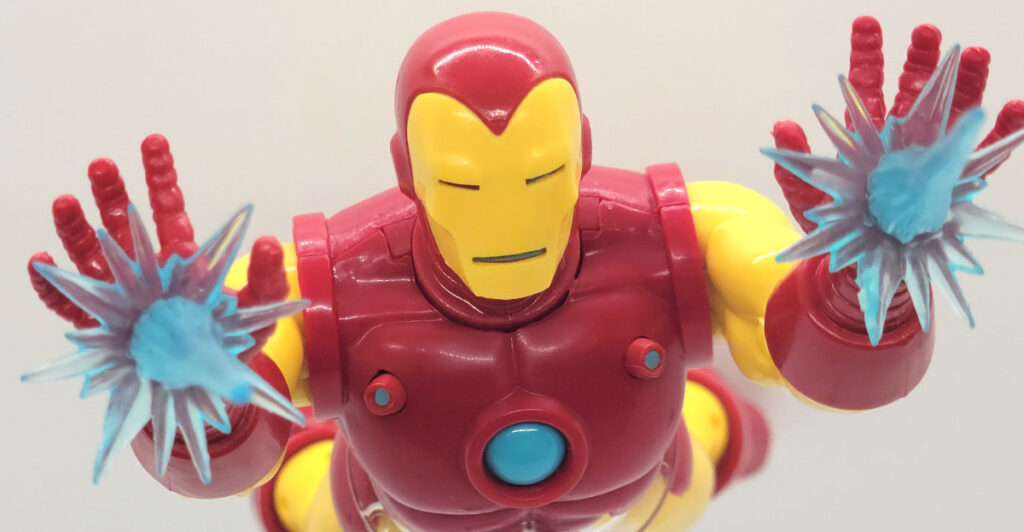 Even though this 6-inch Action Figure of the Iron Man has a blue face, it is still the Marvel Legend A.I. Armor we have been waiting for.

Tony Stark, upon suffering a nearly fatal mental attack from the Black Lama realized he needed some type of back up plan.

Thus was born the A.I. Anthony Stark, a full backup of Stark’s mind, right up to the point of its creation.

The plan was to use this in the event something went wrong or happened to Tony.

Additionally, upon finishing the construct, he used a short term memory wipe to erase his knowledge of the program.

As it has been a long time since I’ve read any Iron Man comic book, I had to do my research online for this information.

Thank you to Fandom Marvel Database for hosting this information online. 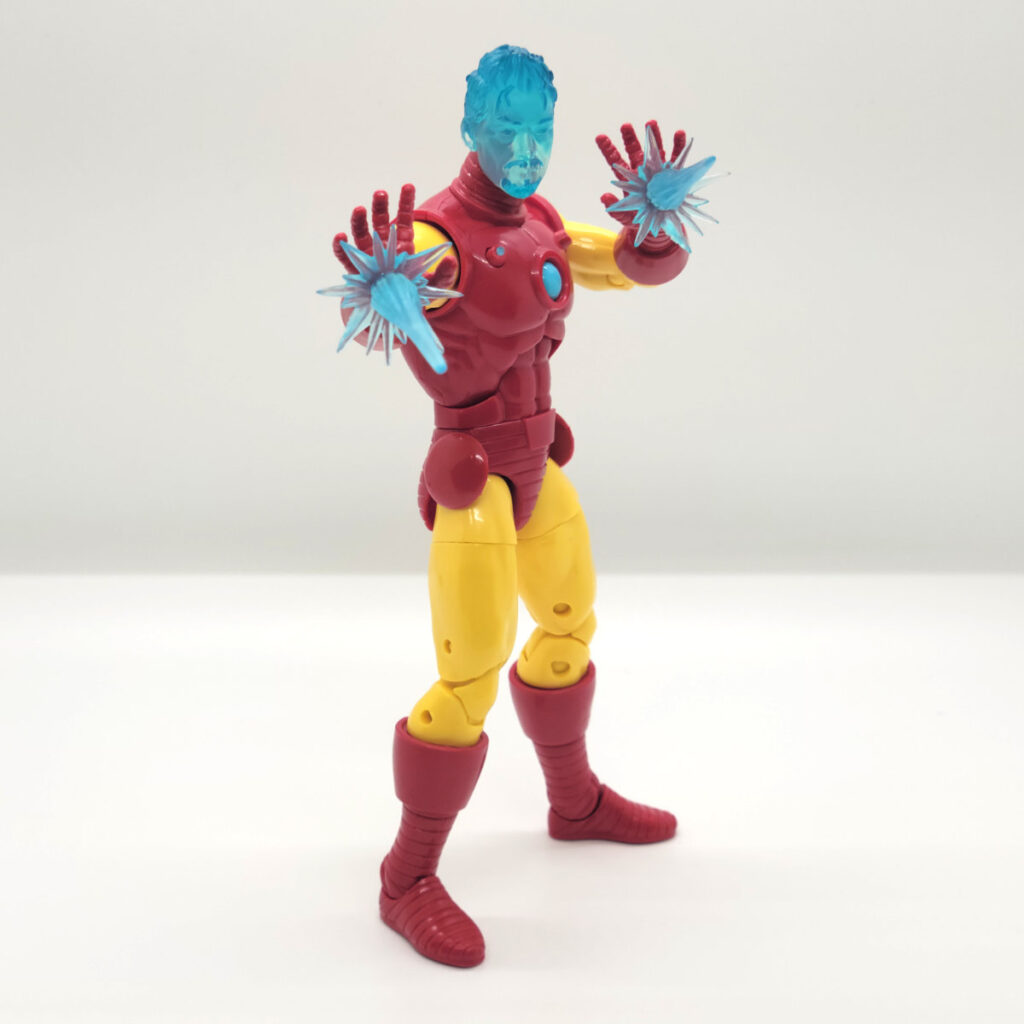 Right off the bat, we can admit this is simply a repainted version of the 80th Anniversary Iron Man figure.

I’m totally ok with that!

I loved that figure and I love this one almost equally as much, perhaps even a bit more simply because the red and yellow are much more in line with his comic book appearance.

Obviously, there are some big differences between the two, notably in color scheme and accessories.

So with that in mind, let’s take a look at the Triple A: Accessories, Appearance, and Articulation.

I’ve seen modders paint this to give him a human look and, wow, those really look amazing.

If you want to make this into a regular Tony Stark head to go on the armor, I definitely recommend checking out YouTube for some great tips on doing so.

Anyhow, the translucent blue used for the head sculpt really looks nice and, admittedly doesn’t look bad on the figure.

My only real complaint is that you can see the red ball hinge through the blue and that, to me, is quite off-putting.

Honestly, I keep this figure displayed with the masked head simply because I prefer it.

The repulsor blasts are nothing new, just in a translucent light blue to match the A.I. scheme of the figure.

Both sets of blasts port nicely into his blasting hands and the boot holes.

Again, nothing really new there.

I think, perhaps, adding a frosted look to the repulsor blasts to give them more opacity might have helped distinguish them better from other similarly painted blasts.

At least that would have set them apart and made them more distinctive to the A.I. design, but I digress.

Unfortunately, this Iron Man is plagued with the all too common… non hinging repulsor hands. *sigh*

I’ll discuss that more, later on, but it definitely brings my accessory grade down a notch. 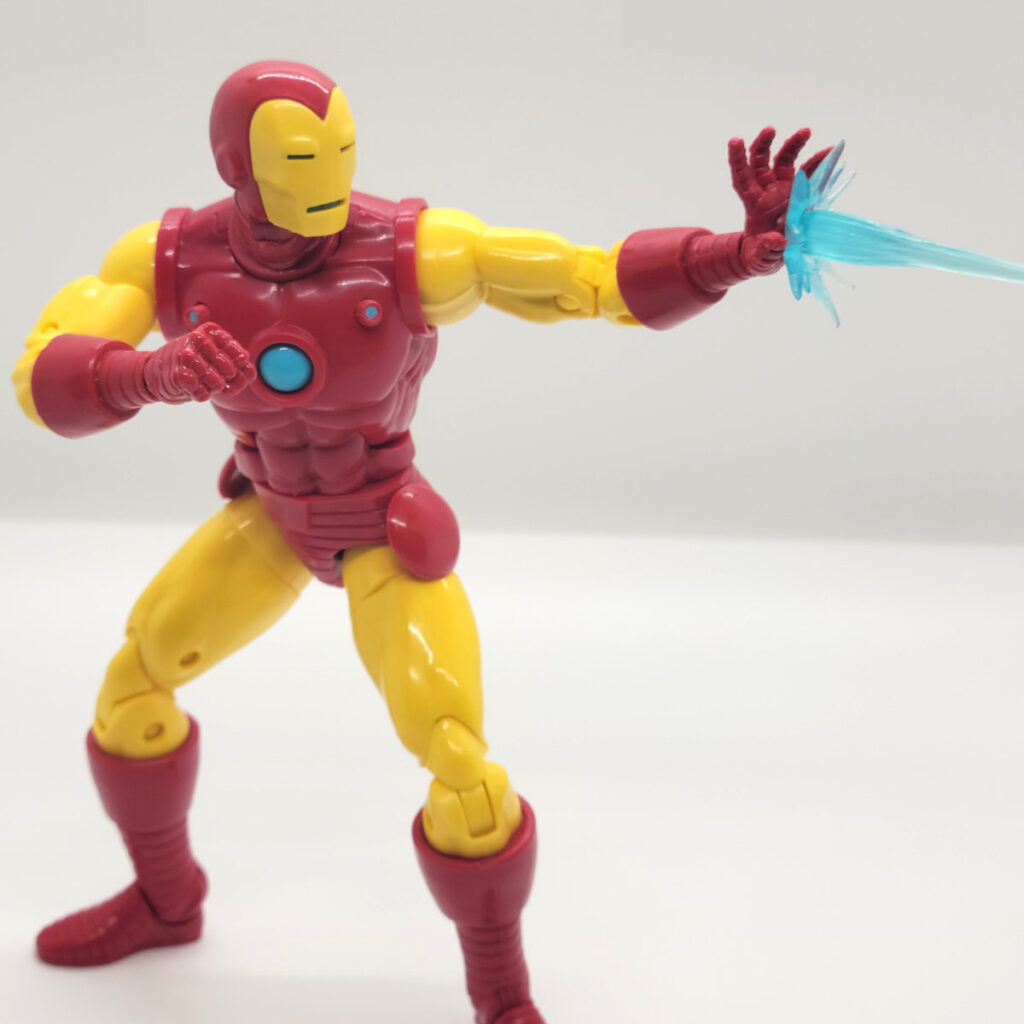 As far as how awesome this figure looks…

Yeah, this is the Iron Man figure that I wanted as a child.

This armor design is what I grew up with and will always hold a special place in my heart.

I was absolutely thrilled when the 80th anniversary figure came out and thought nothing would top it.

Welp, turns out I was amiss.

The more I write, the more this figure edges out in front of that one for my favorite Iron Man.

The bright red and yellow leaps at you, as if it just stepped off of the comic book pages.

Granted, this scheme takes away the metallic look to the armor, but I really enjoy looking at and examining this figure.

Even the blue on the chest plate for the uni-beam and the smaller ports stands out nicely.

Sure, I’d have preferred those to be yellow, but in keeping with the A.I. design, it’s necessary for those parts to be blue.

The most impressive detail though, to me, is the fact that the eye and mouth slits on the mask are also painted blue, to reflect the A.I. glow from within.

That type of attention to detail is what sets this figure apart and readily identifies it for what it is.

Of course, that being said, I’ve definitely popped the regular Stark head on this body more than once and love how it looks.

Realistically, for the layman with no knowledge of this armor’s purpose, it can be displayed alongside your other Avengers figures and not miss a beat.

As I mentioned earlier, this is the same body mold as the 80th anniversary and therefore shares the same amazing sculpt and design.

I’ve always loved this look for Tony’s armor and am so pleased to have two versions of it on my display.

This figure definitely meets the criteria for a solid appearance score!!! 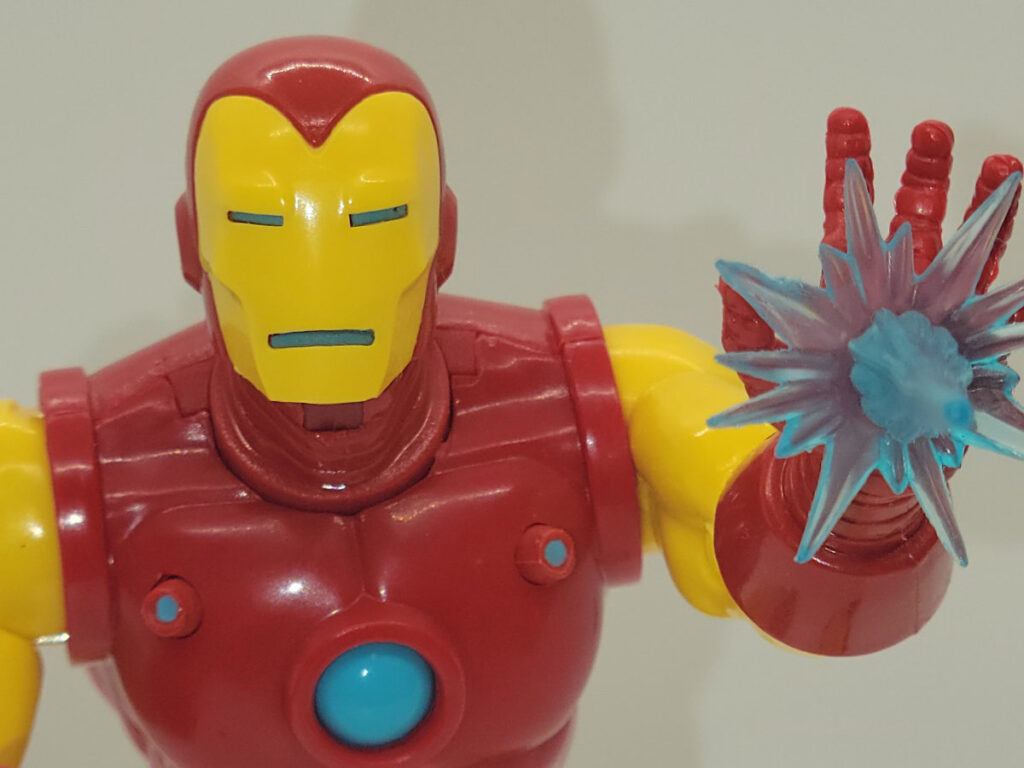 So far we’ve established that the accessories are adequate and the appearance is outstanding, but what of the articulation?

You will be pleased with how Iron Man A. I. Armor moves.

The head is set on a ball hinge which allows Iron Man to look up quite far, for great flight poses, down very deeply.

His shoulders reach above the T pose when extending his arms out from his body and will rotate 360 degrees easily.

Both arms feature upper bicep cuts which turn nicely and double jointed elbows, which have limited bend due to the size of the gauntlets.

His fisted hands turn and hinge, but the repulsor blast hands can only rotate.

The most baffling aspect of this to me is the fact that Hasbro has released several Iron Man figures with hinging repulsor hands prior to releasing this figure.

Why not include hinging repulsor hands here?

That’s a shame because this figure would have benefitted even more by having those hinges.

Anyway, Iron Man has a deep ab crunch that bends forward and backward nicely and sculpting that travels the length of the range of motion.

His waist pivots very easily and his legs can do some pretty awesome splits.

Both legs have upper thigh cuts which are functional and double jointed knees, which like the arms, are limited in how far they’ll bend back, due to the boot design.

Both ankles hinge very nicely and have terrific pivot.

I didn’t have any issues at all with this figure, out of the package and was very grateful to have full articulation functionality. 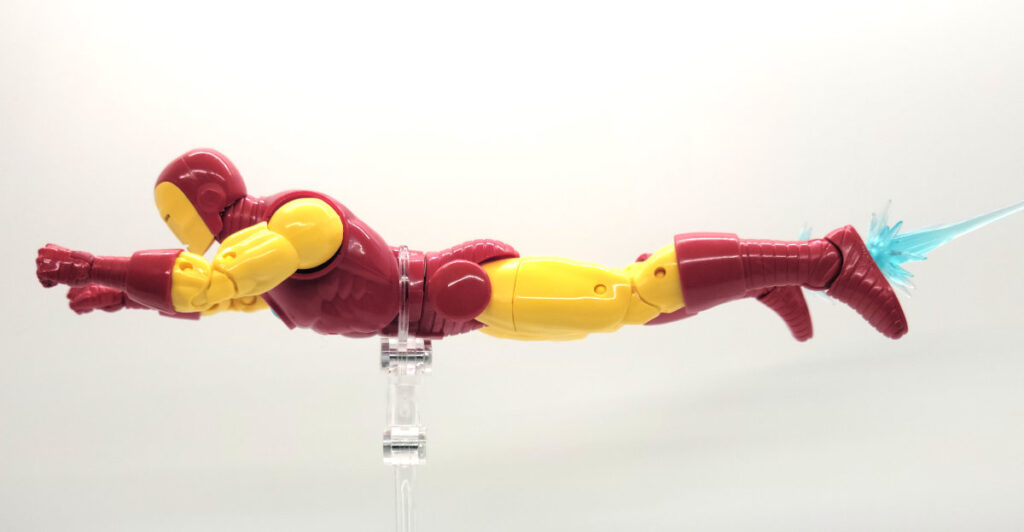 I recently reviewed the Iron Man Modular Armor figure and loved it.

I’ve actually had this figure longer, so when I displayed them, I had to make sure they were together.

Not gonna lie, having this figure next to that one on my shelf is really, really cool.

I am quite pleased to have this in my collection and at the price point of about $20, is worth purchasing for your own.

Iron Man A. I. Armor meets the Triple A adequately and thanks to the exceptional appearance and ease of articulation earns himself 4 out of 5 toyboxes.

You can find Iron Man A. I. Armor and preorder many of the new Marvel Legends figures, at Big Bad Toy Store. 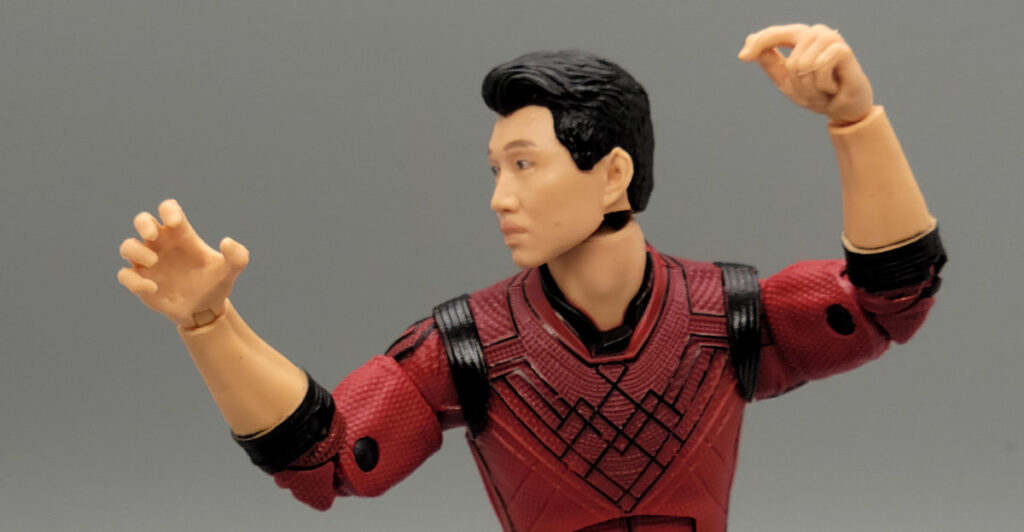