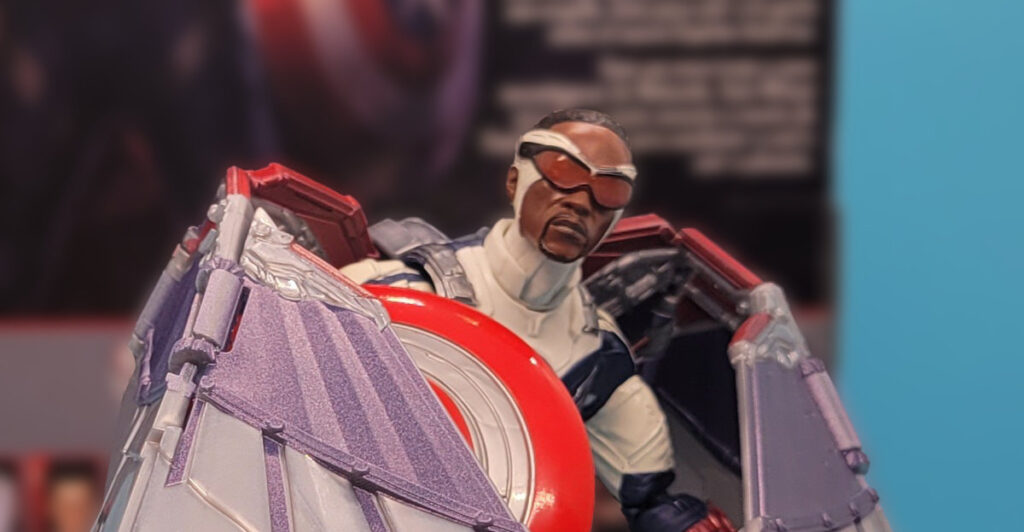 Sam Wilson takes up the star spangled mantle in his new 6 inch Marvel Legend Captain America, based on his appearance in The Falcon and The Winter Soldier.

Sam Wilson, the high flying Falcon, Initially declined the shield and instead, donated it to the Smithsonian Institution believing it would remain there on display.

Wilson is infuriated when John Walker is selected to be the next Captain America and given the shield.

Sam focuses on fighting the Flag Smashers, working with Bucky Barnes and their surprising ally, Helmut Zemo to track them down.

However, seeing Walker lose control after taking the Super Soldier Serum, and brutally murdering one of the Flag Smashers, Wilson and Barnes fought Walker and claimed the shield.

After much consideration and a long talk with Isaiah Bradley, Wilson receives a new costume and wings built in Wakanda and rightfully takes up the Star Spangled mantle. 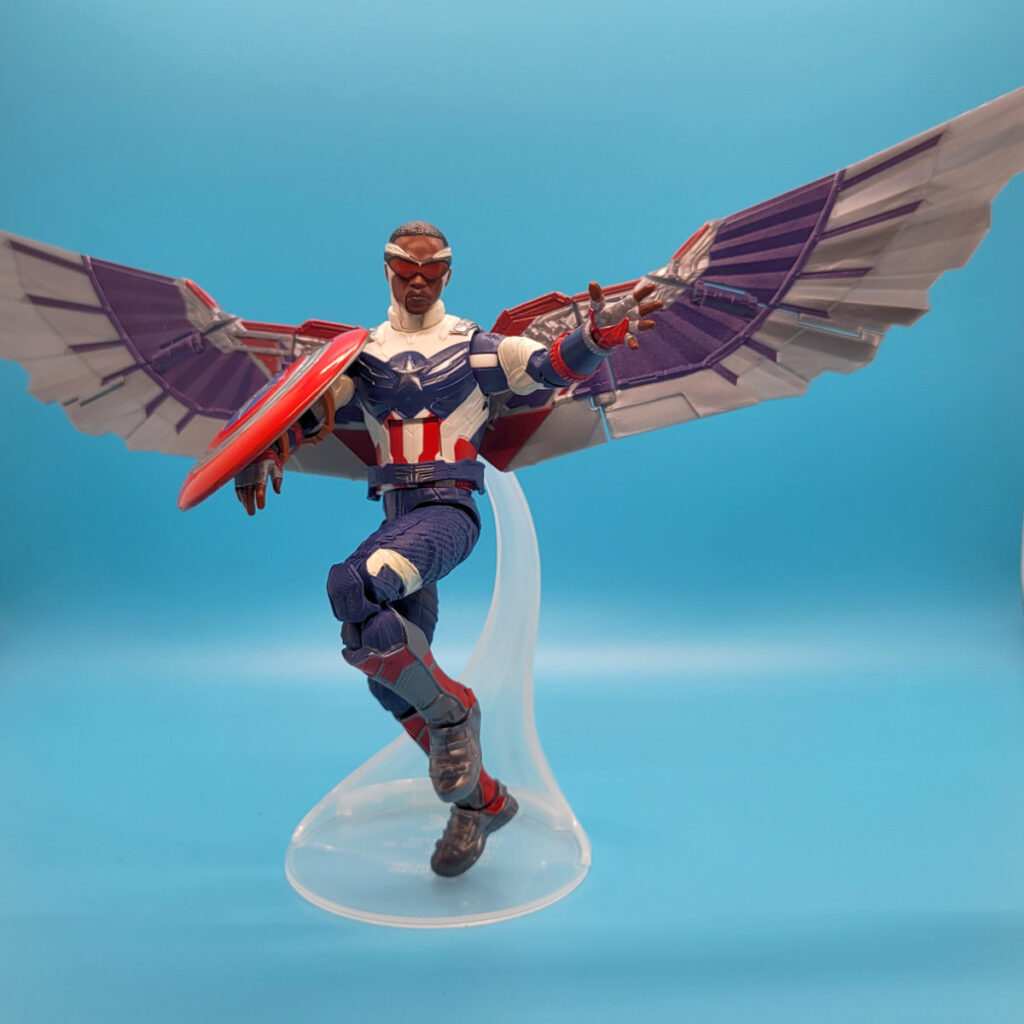 With Barnes and Walker’s aid, Wilson defeats the Flag Smashers and inspires a new generation as Captain America!

At last, the key figure in this set! Captain America comes with… his shield and the backpack for his wings.

Thankfully there are six other figures in this set that allow us to assemble Cap’s wings and they are very, very nicely done!

Would have been nice to even have another set of hands with Cap, but nope.

The pair he comes with are open palmed, ostensibly to make holding his shield in place easier.

No fists for this Cap.

I don’t know, maybe I’m getting spoiled with the amount of accessories that come with import figures.

While I really don’t want to pay in the $90 range for Marvel Legends, I’m willing to pay the roughly $30-$40 for the deluxe figures they produce, with multiple accessories.

I guess I’d just really like to see a little bit more with the standard figures, even if it pushes the price up a few dollars.

All right, enough with the complaining. Let’s talk appearance and articulation. 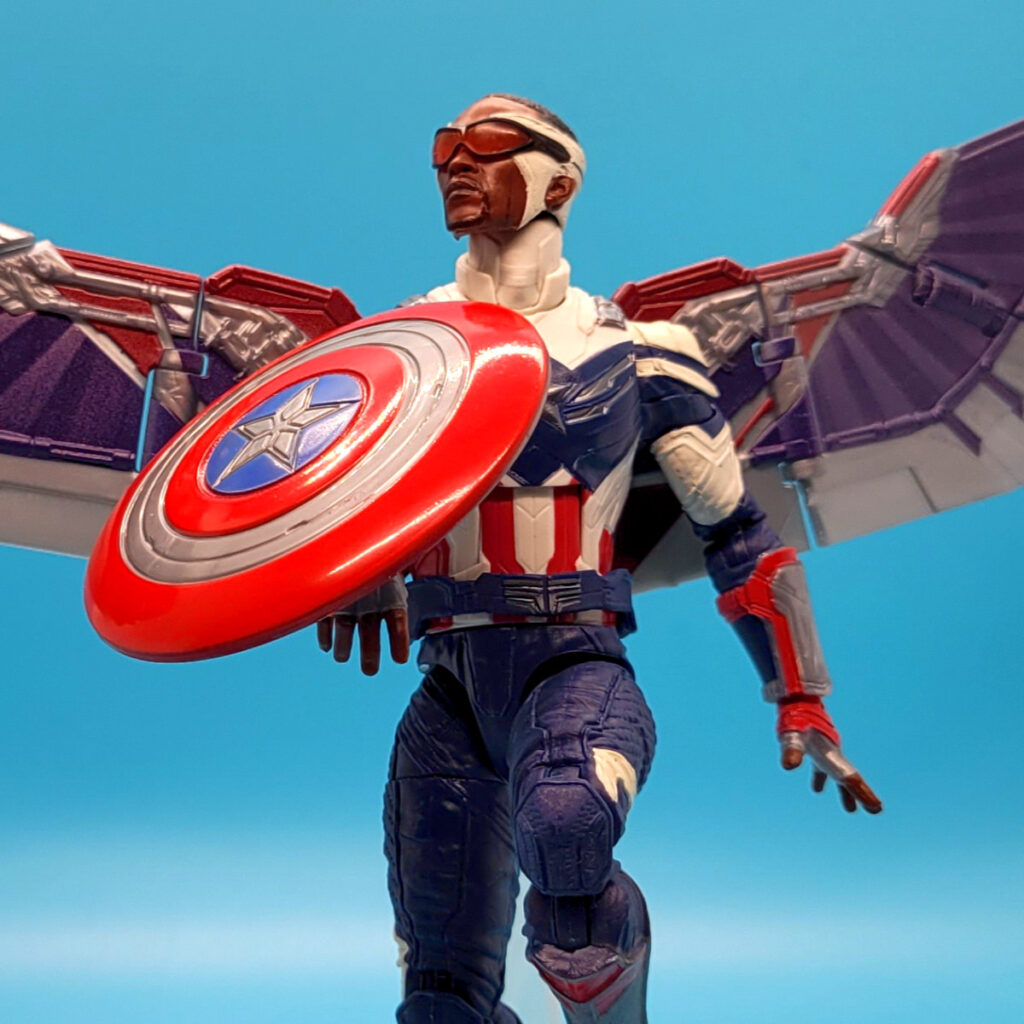 I think if I had any complaint, it would be that I’d like to see a bit more red on the boots.

The paint detail on my Captain America is laid out very well, though I did have some splotches around the goggles and the star deco on his chest.

Other than that, the application was very clean, the reds and whites are very vibrant on this figure and the blue is uniform throughout.

The facial features and sculpt really does a wonderful job of emulating Anthony Mackie’s appearance.

I dig the silver deco for the star and trim on his uniform, belt, gauntlets, and boots.

I was really impressed with the “quilted” design on the pants and all of the intricate detailing throughout the costume itself.

Hasbro’s sculpt artists are really earning their pay, as more and more, the detail in appearance offers strong competition with the look of import figures.

Cap’s shield is done exceptionally well, even though, we’ve seen this version a number of times before.

I like that the straps are a lighter brown and due to the sculpt on Cap’s forearms, fit more snugly on the figure. 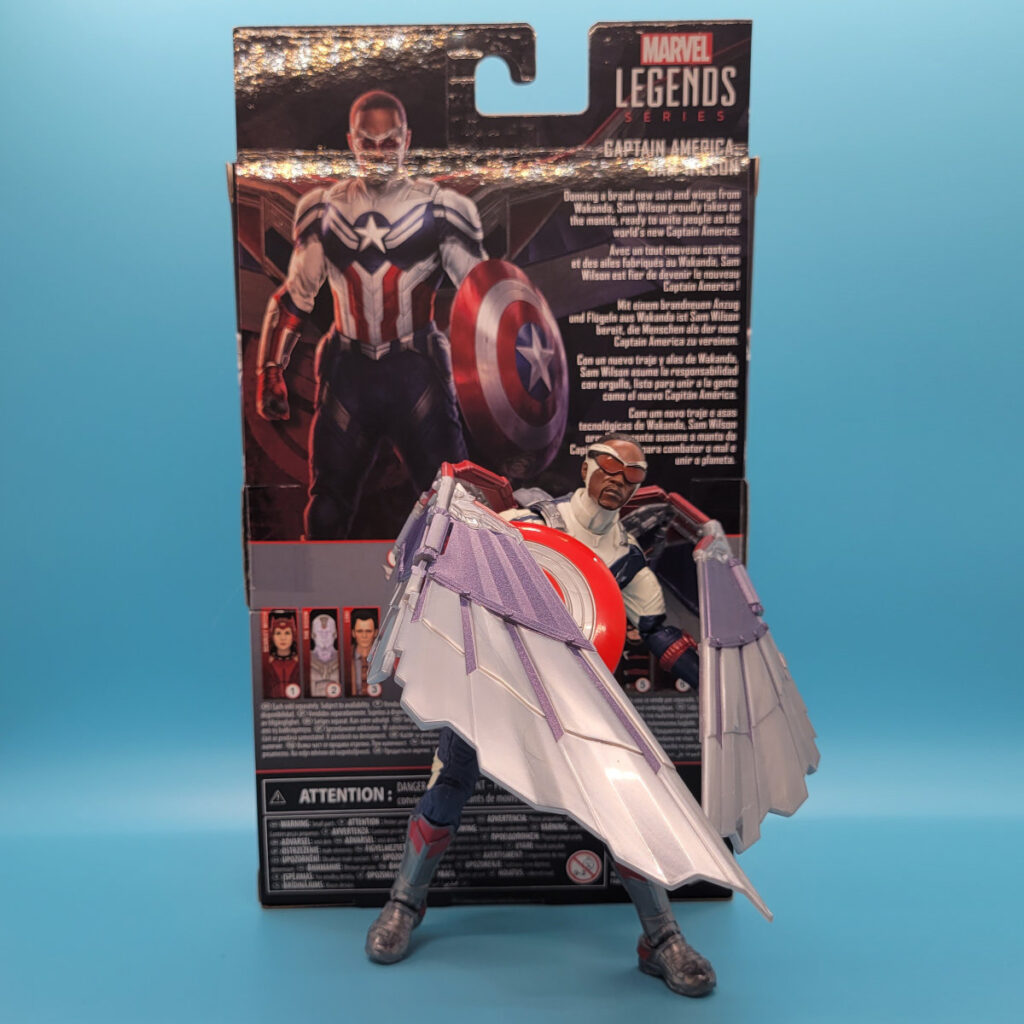 I’ve mentioned them in each review in the accessories section, now we’ll get to talk about Cap’s wings.

The build a wing set is really nice. Though not as intricate as the Vulture set from the Spider-Man Homecoming these wings are really well done.

The wingspan itself is quite wide, as evidenced by my inability to fit them entirely in the pictures!

I decided to see just how screen accurate they are and with a couple of really tiny exceptions, these wings are a really tight match in terms of paint application, look, and functionality.

The base piece that snaps into the backpack will allow for some rotational aspect to the wings, which we’ll discuss further in articulation.

The “open wing” backpack also has an attachment for Redbird, which shows the drone in flight mode, over Cap’s shoulder.

Redbird looks very sharp, but probably could have had a touch more detail applied, at least for my liking.

Lastly, the translucent base ports nicely into the backpack to allow Cap to stand with his wings fully extended.

This won’t, however, function as a flight stand, so you’ll need to find other options to display Cap in some dynamic flying poses.

Overall, Cap, his shield, wings, Redbird, and support base all just look really good and when standing next to Bucky, makes for a really sharp display. 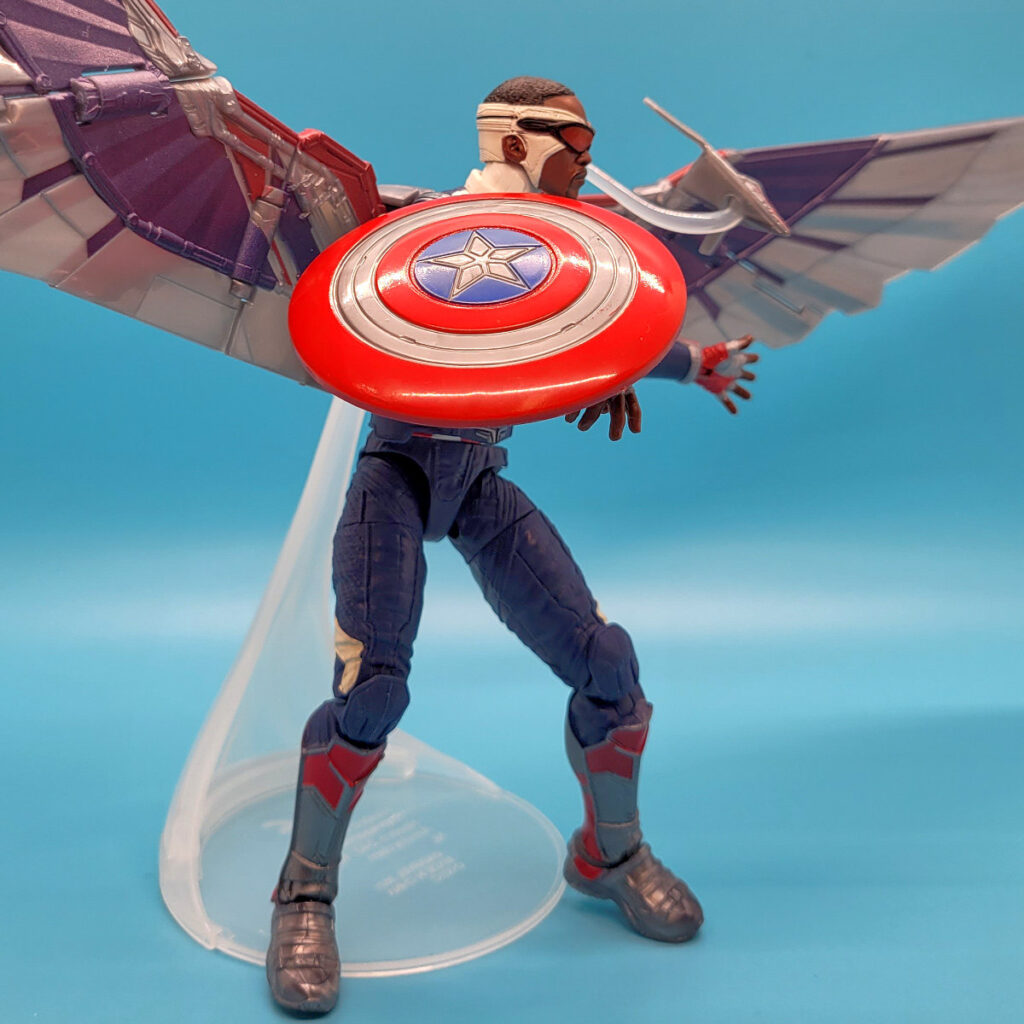 Captain America, as with the rest of this wave, certainly exhibits the same traits… either they have amazing appearance, or amazing articulation, but not both.

In fact, I think the only figures in this wave that I was pleased with both “A’s” were Vision and Bucky.

Cap has numerous articulation issues, which detract from the fun factor with this figure.

His head, does swivel side to side and can look down very well, but it won’t elevate to look up as much as one would want in a flying figure.

His shoulders rotate nice enough, but due to the design of the shoulder pauldrons, his “T” poses leave much to be desired.

Cap does have bicep swivel, along with pinless tech double jointed elbows.

Unfortunately, the gauntlet sculpt prohibits the elbows from bending much past 90 degrees.

Cap, like Bucky has an ab crunch with goes forward nicely, but is somewhat hindered with the full backpack and wings on.

His waist swivel is functional and his ability to do the splits doesn’t amount to much past 45 degrees.

His pinless knees can bend in nicely, and much like several other offerings in this wave, his ankle articulation is terrible. The sculpt precludes rocker or hinge movement. 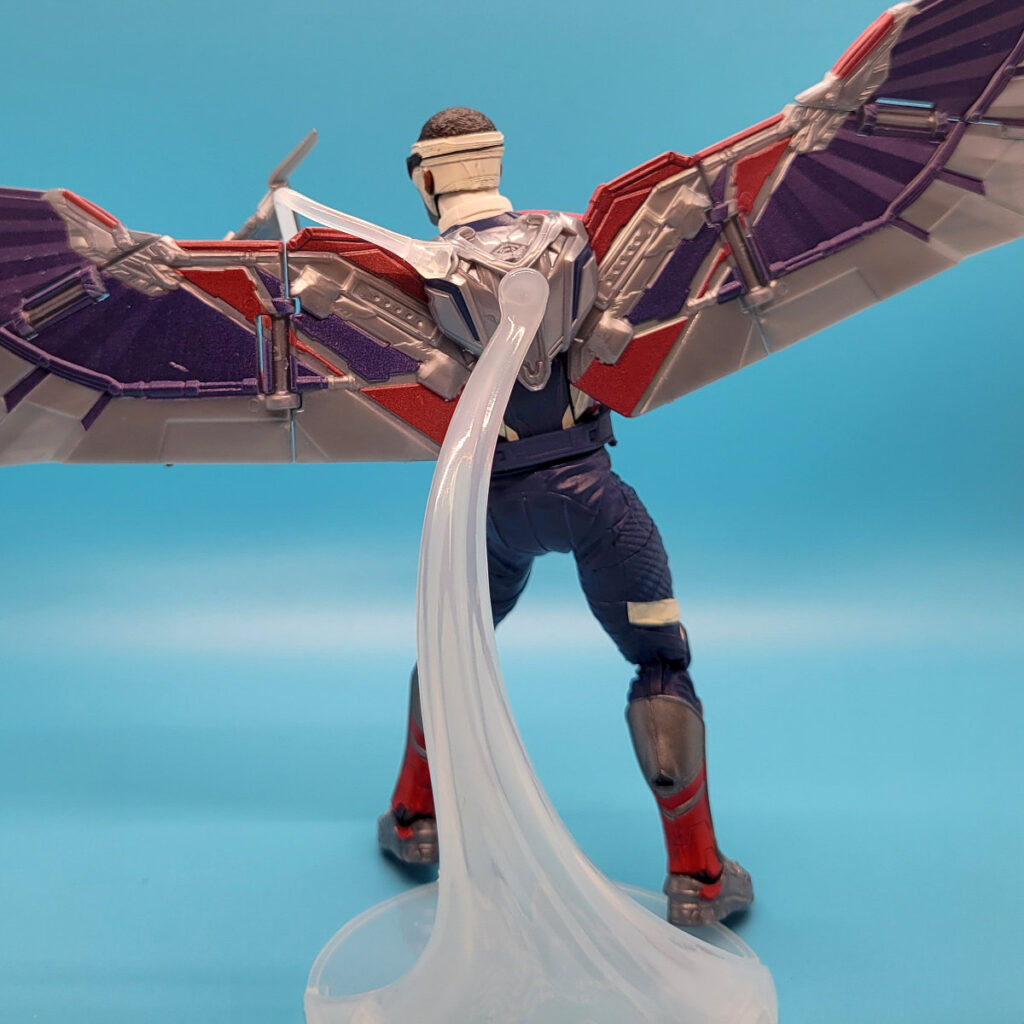 Thankfully he has the support base to help him stand with wings on. Without them, he’ll stand, but you have to work to get the right pose to support his weight.

The wings snap into the backpack and have some limited rotational ability… by limited, I mean they’ll move up and down a little bit but are limited by contact with each other.

There are two sections for each wing and they allow the wings to hinge nicely forward and backward.

This allows you to fold the wings over the front of your figure to deflect incoming bullets, or out and behind him to simulate flight.

Redbird swivels on his support, but if you aren’t careful it will come unpegged from the back pack and is kind of a nuisance to plug back in due to shape and design.

Honestly, when I first saw this wave, I was super excited for it.

I’m really enjoying the offerings on Disney+ and couldn’t wait to get my hands on these figures.

Now that I have them, I must confess to being more disappointed than anything.

While there are aspects of each figure that I truly enjoy, there are also many things that I have legitimate concerns with.

That’s too bad because Hasbro has been taking huge steps forward, but the issues here really seem like a big step back.

At the price of around $20, and thanks to his articulation issues, Marvel Legends Wave 6 Captain America earns an even 3 out of 5 toyboxes.

Just remember, if you want him complete, you MUST get the entire wave… or try to find a complete set of wings on the secondary market.

That being said, you can find your own Disney+ Wave Legends figures at the Big Bad Toy Store. Thanks for checking out the toybox and, until next time… Geek Out! 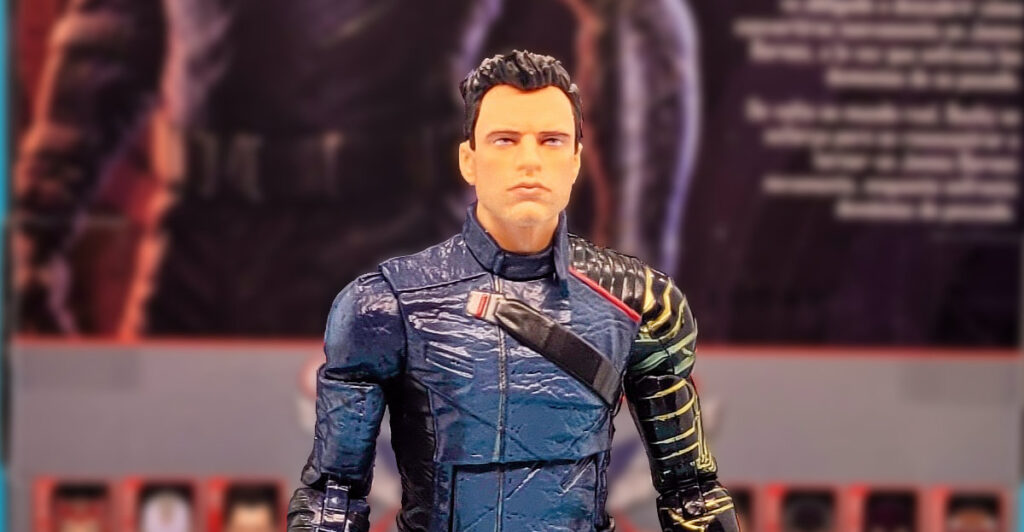