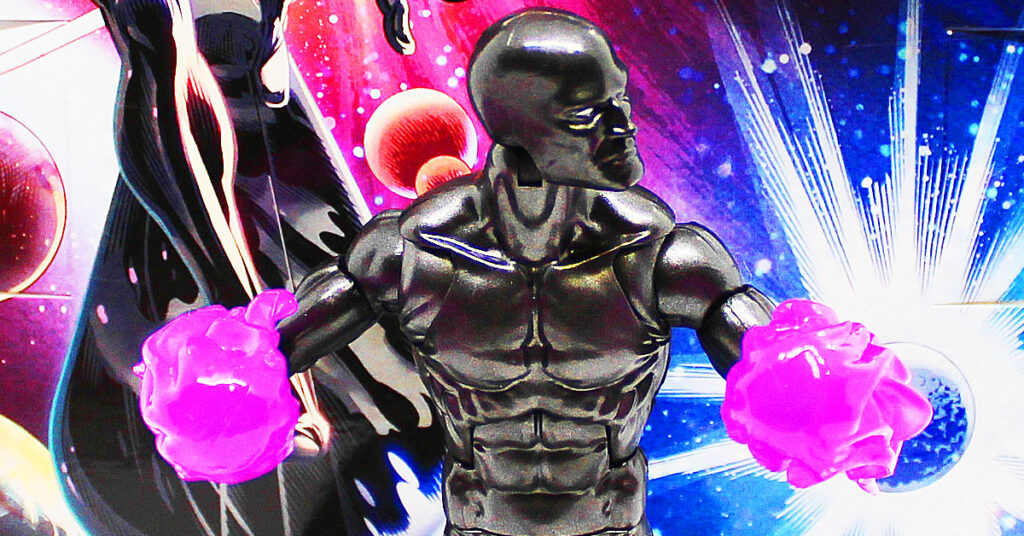 In a dark, desolate future Norrin Radd, The Silver Surfer, now imbued with black matter and wielding the mighty Mjolnir battles the mad Titan, King Thanos as The Fallen One.

Norrin Radd lived a peaceful life on the planet Zenn La, that is until the day Galactus came calling. In an attempt to spare his planet from consumption, Radd offers to become Galactus’ herald. He would seek out suitable worlds for Galactus to devour.

Agreeing to this arrangement, Galactus transformed Radd’s body into something more suitable to withstand the harsh conditions of space. He then imbued Norrin with the power Cosmic and created a surfboard that responded to Radd’s mental commands.

Thus was born the Silver Surfer. 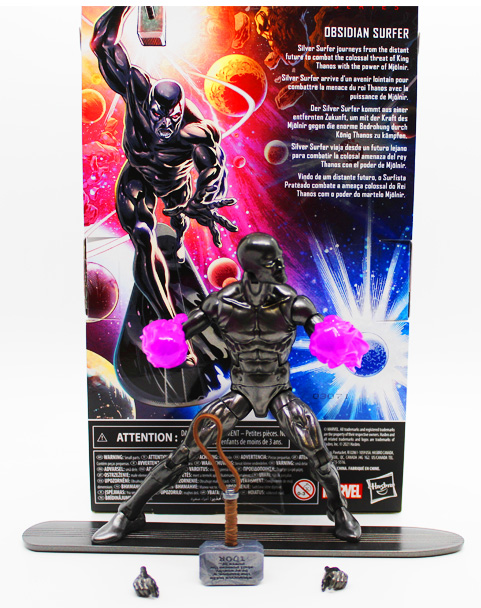 In a distant, dark future, one in which the mad Titan Thanos has conquered the galaxy and disposed of all who would oppose him, the Surfer stands alone against him. Having worked to become worthy of wielding the mighty Mjolnir and now enhanced by black matter, the former Silver Surfer soars the spaceways into battle as the Obsidian Surfer, or more fearfully, the Fallen One.

Marvel Legends Silver Surfer: The Fallen One is a repaint of the previous Walgreens Silver Surfer figure and comes with two purple energy bolts, two pairs of hands, fisted and grasping, his surfboard, and Mjolnir, Thor’s powerful Hammer. This figure is built on the Sunfire body mold, which is really an excellent choice. Physically not as imposing as the traditional Bucky Cap mold, this figure really suits the Surfer in terms of musculature, design, and posability. 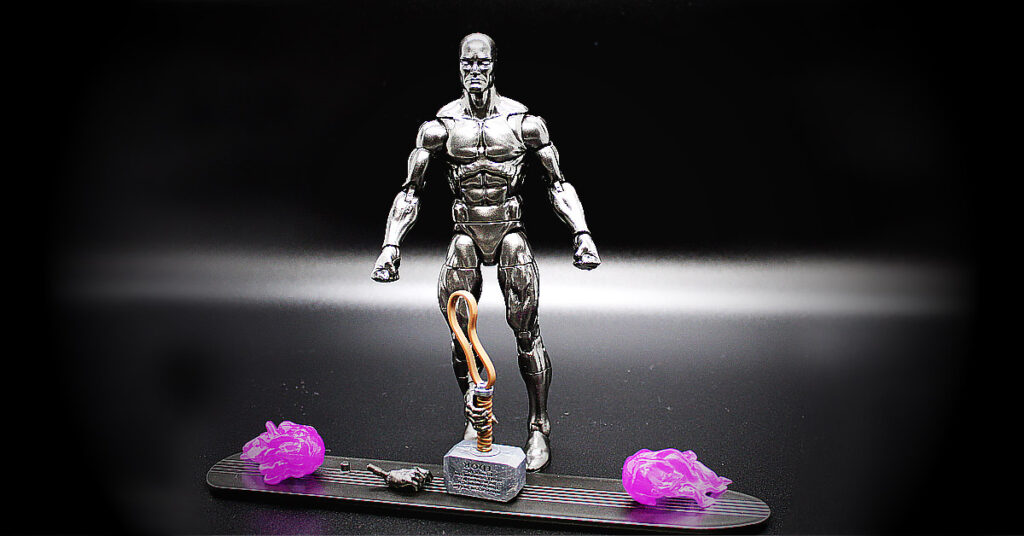 Insofar as his appearance is concerned, the Surfer looks outstanding! Upon initial inspection the gunmetal color of the mold is very uniform and clean. There isn’t any of the typical marbling associated with the molded plastic. Then, what blew my mind, was when I looked at the figure under magnification.

What I thought was just a gunmetal grey was really a metallic flake. The magnifying lens I used showed a sparkling metallic flake look, giving the Surfer even more depth in appearance. 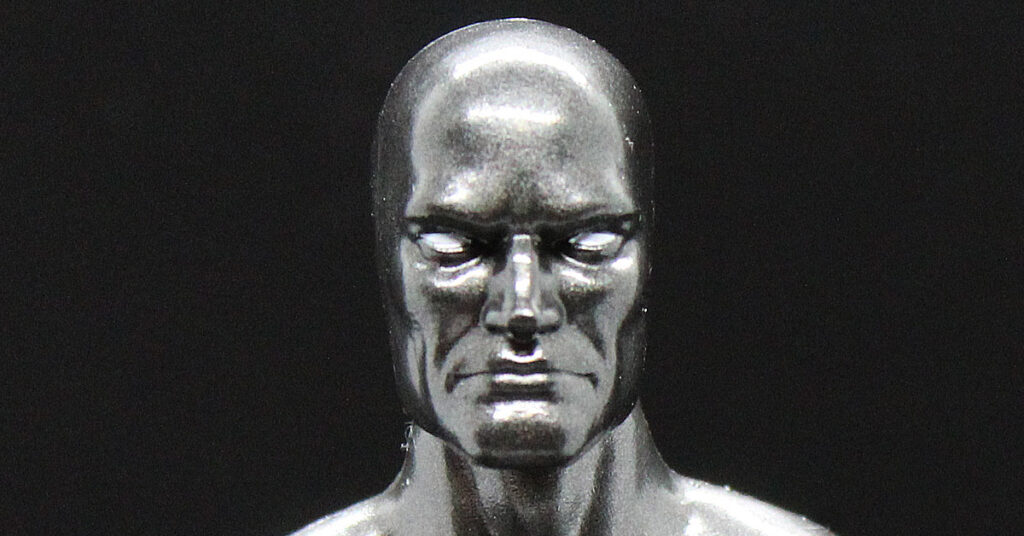 As you can see in the close up of his face, this metallic look is really incredible attention to detail. It’s uniform across the entirety of the Surfer and is impressive to behold. The surfboard is painted similarly, but the plastic used is definitely of a different quality than the figure as the metallic flake look isn’t as prominent.

The purple blast effects are molded and look quite brilliant against the gunmetal figure. I think tapering them to a more translucent purple might have looked even better, but that’s just a minor opinion. 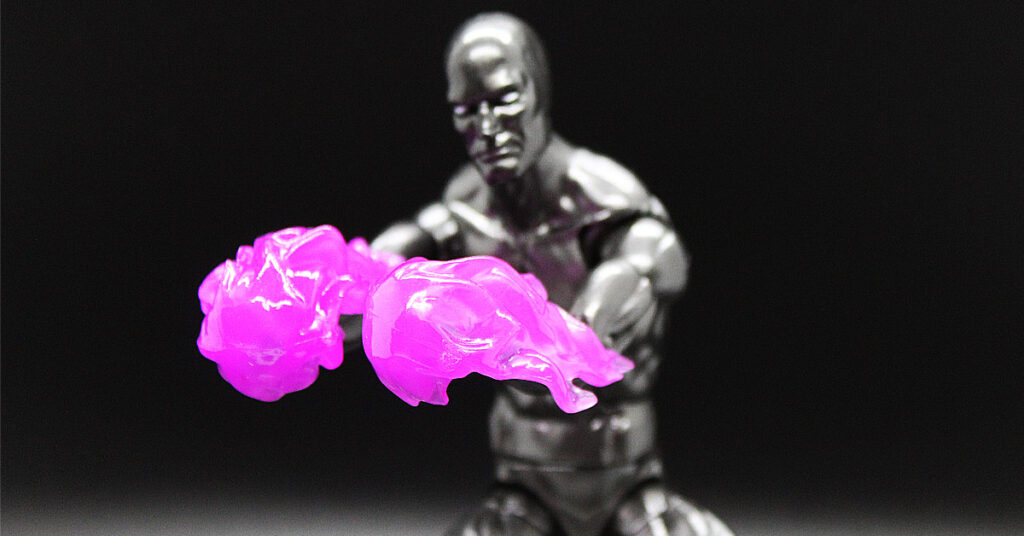 Mjolnir is excellently detailed from the brown handle and strap to the greys and blacks on the hammer head. Even the inscription is washed in black, making for an easy read. Overall, this figure is very aesthetically pleasing and looks amazing on my shelf, next to the original Silver Surfer piece.

Marvel Legends Silver Surfer: The Fallen One’s articulation is standard, for this body mold, which means it’s excellent! The Sunfire body mold, quite honestly, is my favorite Legend base. The Surfer’s head turns side to side and looks up very far and down quite far as well, thanks to the “pile driver” motion of the ball hinge. Both shoulders rotate 360 degrees and his arms will raise past 90 degrees to his sides. The butterfly joints give a much greater range of motion for the arms and shoulders, allowing for very dynamic posing. 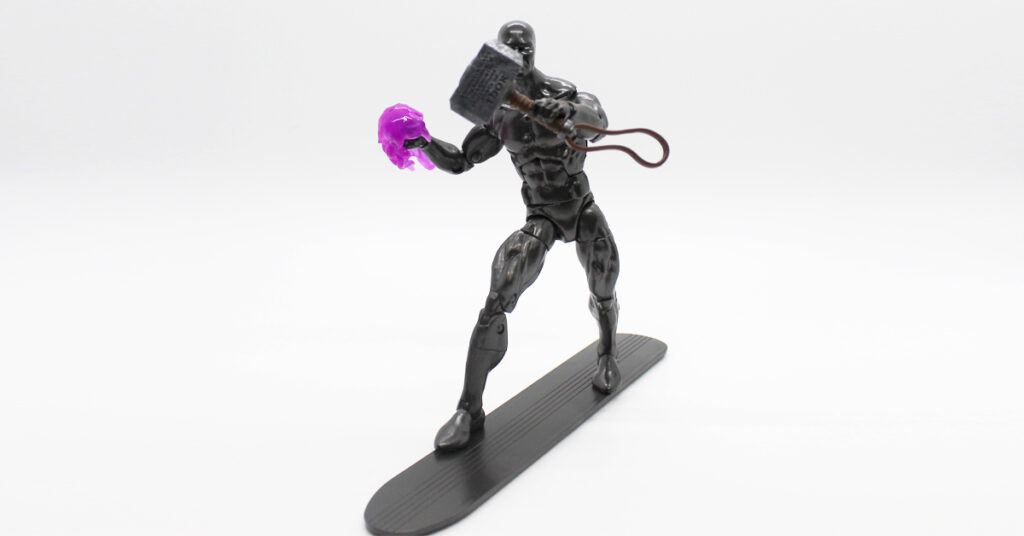 His fists can be thrust forward, or backward very far, giving the illusion of flight on his board. The Surfer features bicep swivel, double jointed elbows which will bend in exceptionally well and both pairs of hands have wrists that swivel and hinge up and down. He has a deep ab crunch allowing him forward and back bending flexibility, plus his sculpting follows the curve of his body, meaning there are no odd looking gaps or flattened pieces at the top of the hinge Surfer’s waist swivels and his legs can do the splits.

He’ll kick forward very far, but not back as much. Surfer features an upper thigh cut which works well, double jointed knees that allow for near heel to butt contact and ankles that hinge far both forward and back with deep rocker motion. 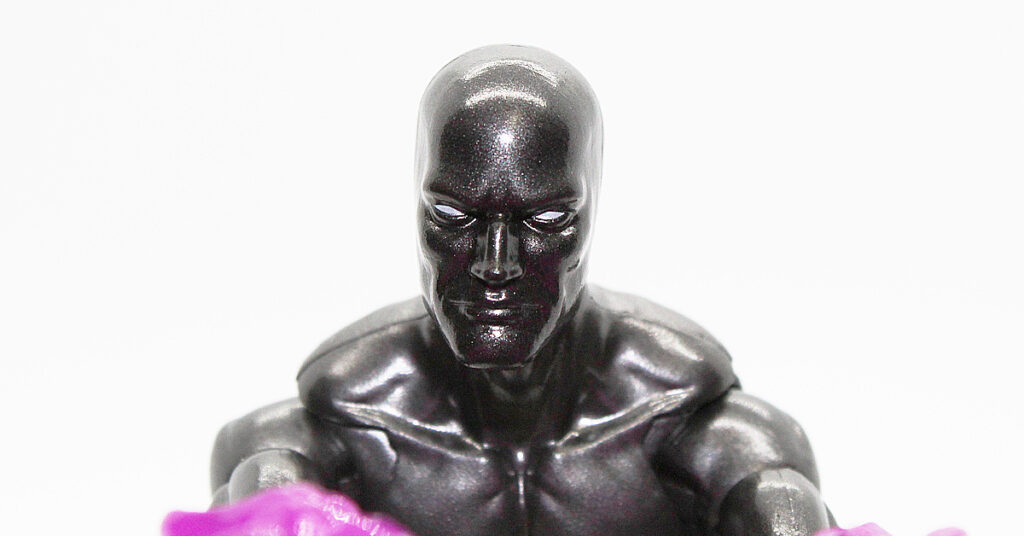 Having been a fan of the original Walgreens Exclusive Silver Surfer, picking up the  Marvel Legends Silver Surfer: The Fallen One was a no brainer.

I was amazed though to have found one in the wild.

They sold out online within 14 hours, so I figured I’d end up getting one on the secondary market. About a week or so later, I was in my local Walgreens and much to my surprise, found him on the shelf!

The appearance, articulation, and price point of $19.99 easily give this figure a solid 5 out of 5 Toyboxes for me!

If you can get one, by all means, do it! Thanks for hanging out and be sure to check back for our next review in a couple of days! Until then… GEEK OUT!!! 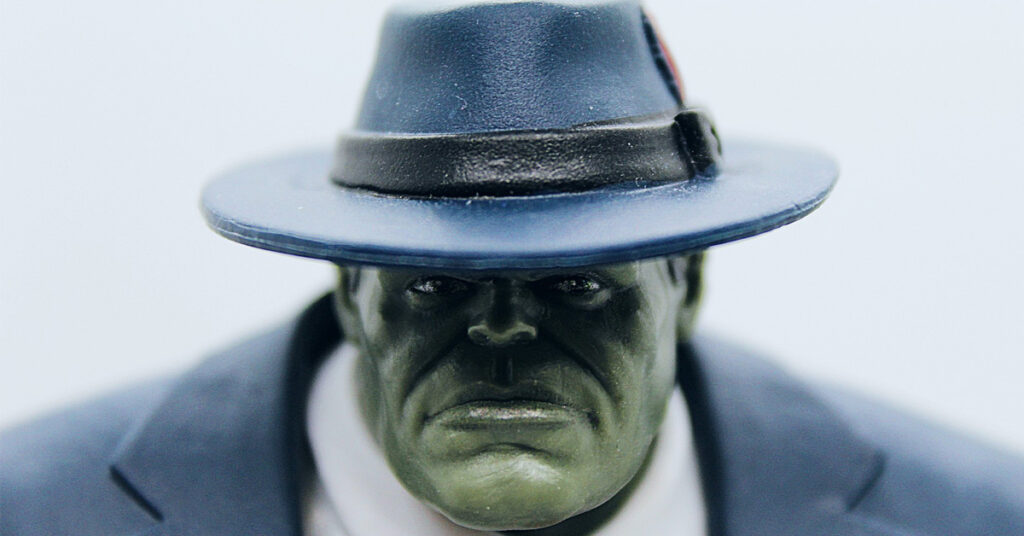