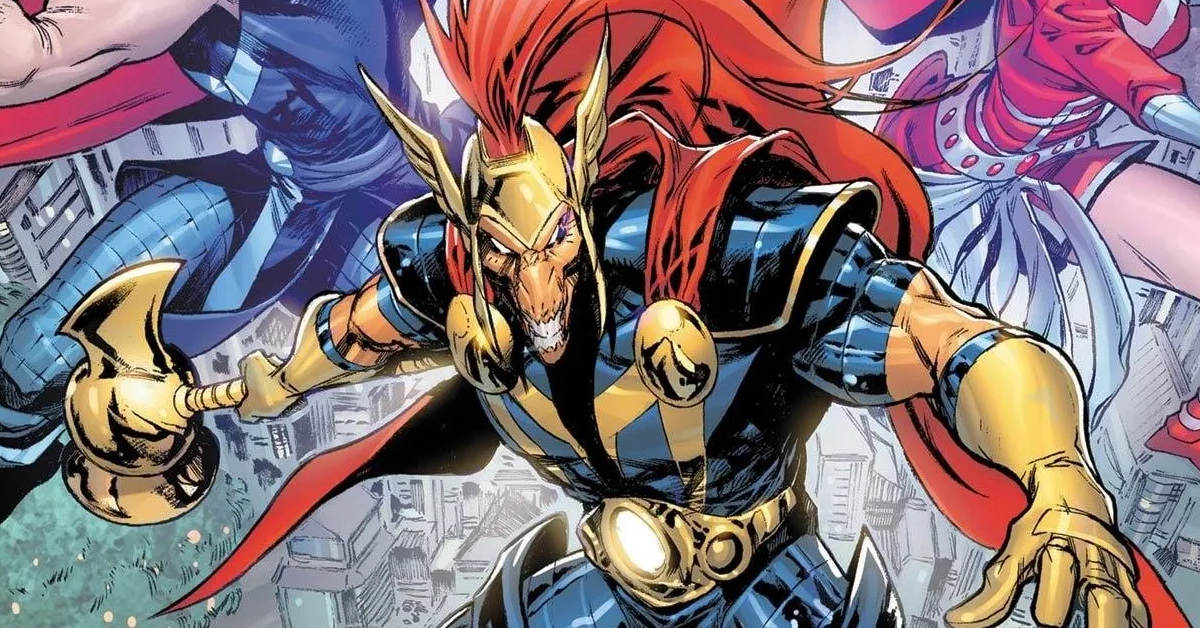 After all, Sony’s marketing team turned Tobey Maguire and Andrew Garfield invisible in the Spider-Man: No Way Home preview. That, too, was a Marvel Studios production. Like the two Spider-Man actors, Beta Ray Bill would be a massive spoiler.

Then again, it could be Hercules, too. If it’s Hercules, who are they looking at?

Certainly, someone is missing. (It’s probably not Mephisto, though.)

In the first hour of release alone, the video reached nearly a million views. As of press time, the teaser now has 21,062,440 views and 1.3 million likes. I don’t know how that fares with other first teaser releases but with those numbers alone, it indicates a lot of people are anticipating its premiere in July.

Thor: Love and Thunder will electrify the box office. 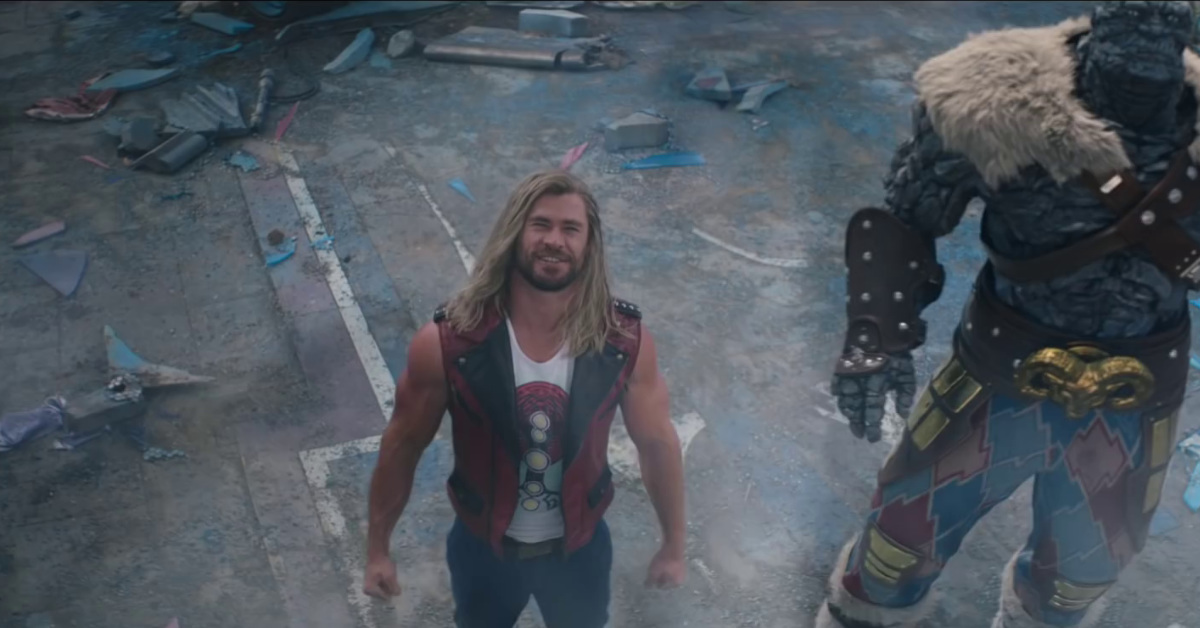 As expected, Hemsworth shines again as the God of Thunder, Thor. Many MCU fans watched and re-watched the teaser looking for clues and hints for the story. The official Marvel channel has yet to release the full trailer. Thus, the initial focus is answering the questions: What’s up, Thor? How have you been after Avengers: Endgame?

However, other than showing what Thor has been up to, we see him in different phases in his life. He joins the Ravagers and the Guardians of the Galaxy. Moreover, he is also with Korg.

Furthermore, Valkyrie (Tessa Thompson) was also in the teaser. In addition, we see Jane Foster (Natalie Portman) as the Mighty Thor wielding Mjolnir.

But the Thor: Love and Thunder trailer hides the villain, Gorr the God Butcher (Christian Bale). Still, viewers can feel his presence, especially during the frame with the remains of a beast. This scene is exactly lifted from 2012’s Thor: God of Thunder comic book.

Created by writer Jason Aaron and artist Esad Ribic, the beast is actually a god named Falligar the Behemoth. Falligar the Behemoth is one of the trail of god corpses that Thor discovers. Much like discovering the existence of a serial killer, Thor means to put a stop to the atrocious acts.

The elephant in the room is Beta Ray Bill.

The teaser showed Thor and Korg returning to Sakaar. Could it be possible that Beta Ray Bill would be there to share a scene with them? In the trailer, just who or what is it that Thor and Korg are staring at over their heads? 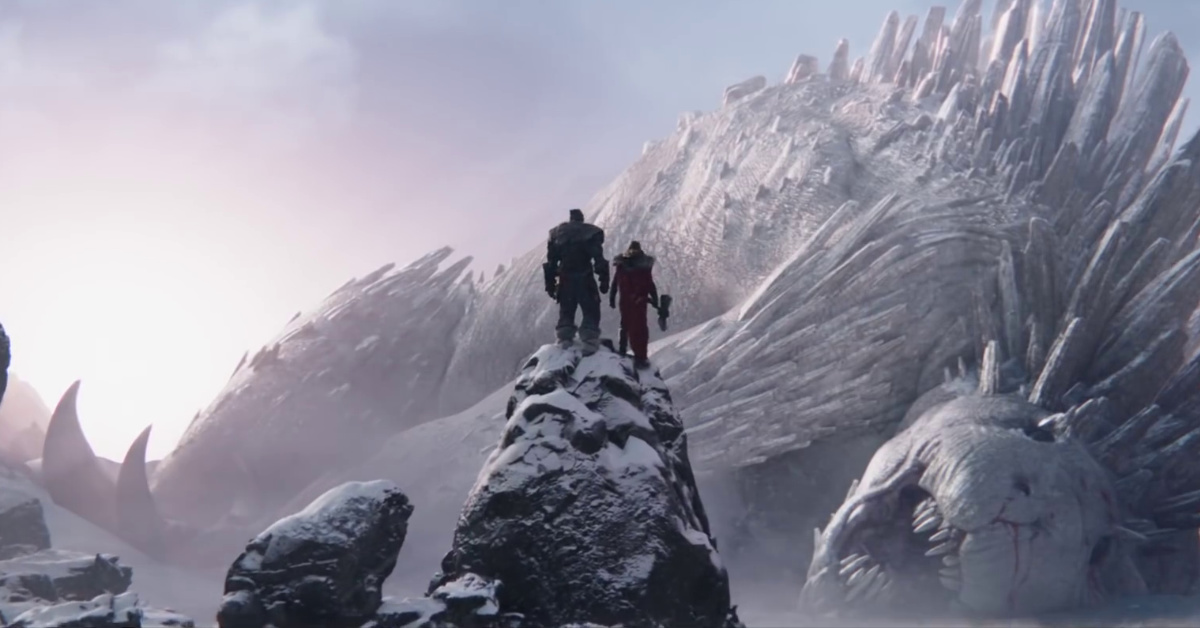 With Gorr the God Butcher as the main villain of the movie, several gods may meet their demise. This includes gods of other cultures. The teaser itself also showed Russell Crowe’s Zeus. Where Zeus is, Hercules may also be present. For how long an exposure, different gods may be featured in the film. Hercules is another contender for the possibility of being part of Thor: Love and Thunder.

However, as stated in the teaser, Thor has resolved to live more peacefully and to find himself and his purpose. He even stated his superhero days are over. Stormbreaker is even retired by a tree upon a cliff.

Upon defeating Gorr in the comics, he was affected by the philosophies of the very villain he vanquished. Thor started to question the worthiness of all gods including himself. Because of it, Thor was no longer able to lift Mjolnir.

Aside from Jane Foster becoming Mighty Thor because of Mjolnir, Beta Ray Bill can assume Thor’s position in his absence. In fact, in the comics, Beta Ray Bill is the wielder of Stormbreaker. Chances of finally seeing him in the MCU are higher now more than ever. And that is not just in the form of a statue.

This added to the anticipation of what we already know which are coming up. Seeing Foster transform into the Mighty Thor will definitely be awesome. Bale as Gorr the God Butcher will be a force to reckon with.

Everything just keeps fans at the edge of their seats.